A bit of gossip: Larry Gagosian vs. Adam Lindemann… 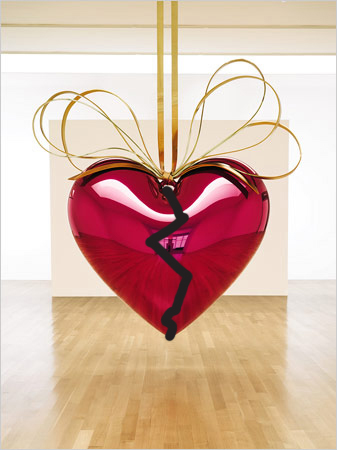 So our speculation last week as to why Gagosian bought another one of his own artists’ pieces at Sotheby’s was partly correct. An article in PageSix this weekend gives us the dirt on the original owner, collector Adam Lindemann, and why Gagosian had dropped him as a client years ago.We had stated that a dealer of Gagosian’s caliber could probably flip a sculpture like Jeff Koons’ “Hanging Heart” for a tidy profit, but it turns out Lindemann was the one who profited – in more ways than one. According to the article (which Gagosian declined comment and Lindemann denied was true), Lindemann “lured away” Stephania Bartolami and Amalia Dayan from Gagosian Gallery and set them up with the brief Bartolami Dayan gallery in Chelsea.

Afterwards, Gagosian cut off Lindemann and refused to sell him anything, until Amalia went to Larry and coerced him to sell the Koons sculpture to them, as it was a “symbol of their love”. Gagosian apparently has a soft side, as he caved and sold the sculpture to them for a mere $4 million.

According to an insider, the sculpture wasn’t even taken out of the crate by Lindemann and Dayan before they sent it straight to Sotheby’s for auction. Gagosian did what he had to do to maintain his artist’s reputation – he grit his teeth and bought it himself.

Art insiders say that Lindemann has blacklisted himself from the art world. “There’s an unwritten law against flipping,” one said.

Sculpture sale not all heart [PageSix]

This entry was posted on Sunday, November 25th, 2007 at 5:15 pm and is filed under Art News. You can follow any responses to this entry through the RSS 2.0 feed. You can leave a response, or trackback from your own site.

One Response to “A bit of gossip: Larry Gagosian vs. Adam Lindemann…”