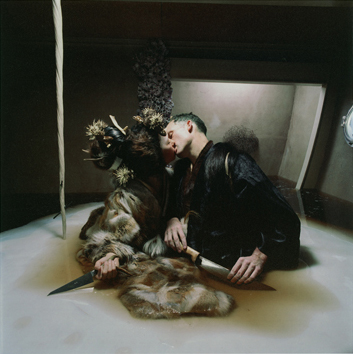 Matthew Barney’s Drawing Restraint is on view at Serpentine Gallery, London until Sunday, November 11th. This exhibit has traveled from Japan to Korea, the US to the UK, and will be shown in Austria next year.

The exhibit offers a comprehensive experience of Barney’s “Drawing Restraint” series, which is performance-based and explores the idea that “form emerges through struggle against resistance” (SFMOMA). This series began in 1987 when he was still an art student, inspired by his former experience as an athlete. He created work while restraints were attached to his body.

This entry was posted on Thursday, November 8th, 2007 at 12:58 pm and is filed under Art News. You can follow any responses to this entry through the RSS 2.0 feed. You can leave a response, or trackback from your own site.