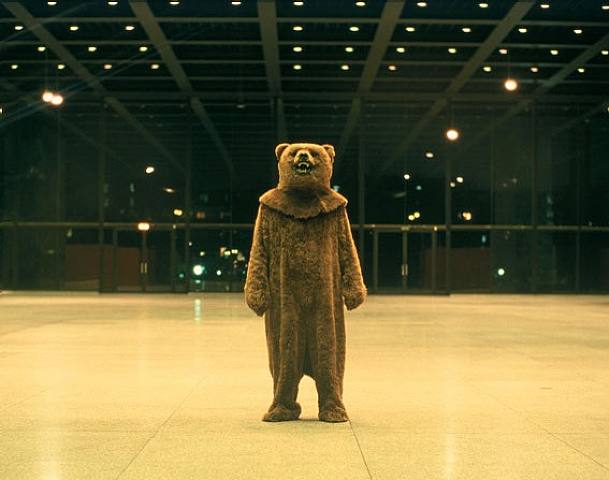 A still from Mark Wallinger’s Sleeper, via artnet.

On December 3rd 2007 Tate Britain awarded Mark Wallinger the 2007 Turner Prize for his video, “Sleeper.” Since 1984, the prize has been awarded annually to a top British Contemporary Art Exhibition of the previous year and is generally regarded as one of the top art honors in Europe. Past winners include Damien Hirst, Gilbert & George and Anish Kapoor. The exhibition is on display through January 18th at Tate Liverpool.

More Details on Wallinger after the Jump: Per Tate:

In addition to the Turner, Wallinger was shortlisted at Tate Britain for his “State Britain,” direct representation of the banners and paraphernalia of Brian Haw’s protest in Parliament Square. The jury commended its immediacy, visceral intensity and historic importance. The work combines a bold political statement with art’s ability to articulate fundamental human truths.”

Above, an image of the artist, ©Charlie Hopkinson via Tate.

Born in Chigwell in 1959, Wallinger has studied at London’s Chelsea School of Art and at Goldsmiths College.  He lives and works in London, producing works noted for their succinct social commentary and political resonance. His early work explored the values of contemporary British society, in particular national identity. His focus subsequently expanded to address themes of death and religion. Despite dealing with such expansive themes, his work is often characterised by a lightness of touch that belies the serious and multifaceted nature of the subject matter.

Sleeper, Wallinger’s entry for the 2007 Turner prize, records ten days during which the artist, alone and dressed in a bear suit, occupied Berlin’s Neue Nationalgalerie for ten consecutive nights. The museum’s location enables a diversity of themes to converge, creating a uniquely complex and unsettling work. The bears in the nearby historic Zoo are doomed never to reproduce, the possibility of their procreation in captivity preordained and controlled by man. Fortified by a culture of surveillance and paranoia, Berlin during the Cold War was physically, politically and socially divided. The ‘sleepers’, or double agents, blended into their surroundings by sporting plausible disguises. Wallinger, a Briton in a foreign city, disguises himself as a bear – the heraldic emblem of Berlin – an appropriation in which he becomes both ‘bear’ and simultaneously not ‘bear’.

Wallinger has described how the idea of a divided realm exists within his subconscious, shaped by a German fairy tale in which a prince is transformed into a bear. In Sleeper the Marxist dictum in which history returns first as tragedy then as farce is wryly expressed. Allegory, the repression of memory, and the mutability of national identity combine to offer a meditative exploration of the language of representation, as well as an examination of the nature of perception itself.

This entry was posted on Tuesday, December 4th, 2007 at 8:05 pm and is filed under Art News. You can follow any responses to this entry through the RSS 2.0 feed. You can leave a response, or trackback from your own site.