The Philosophy of Andy Warhol (From A to B and Back Again)
(Andy Warhol, 1977)
Read More and Buy↠
Home » The Man With 800 Warhols

The Man With 800 Warhols 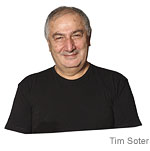 Since moving to New York from Colombia over 20 years ago, Mr. Mugrabi has become a leading collector of Andy Warhol works—often setting pricing precedents at auctions. After receiving a 179% return on investment from his first Warhol purchase, Mr. Mugrabi has become fixated on collecting Warhol specifically. He says, “Every empire has its influences, and I realized Andy was the authentic American.” He now owns 800 of the artist’s works.

This entry was posted on Tuesday, January 8th, 2008 at 6:19 pm and is filed under Art News. You can follow any responses to this entry through the RSS 2.0 feed. You can leave a response, or trackback from your own site.