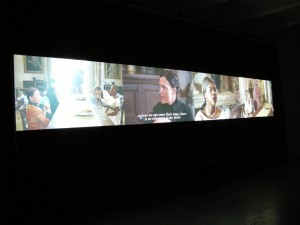 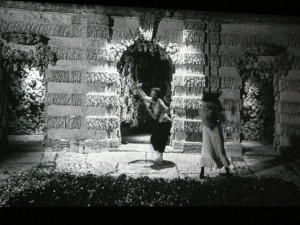 Sullivan examines the process by which cultural acts are often presented as absolute truths. Often absurd, her large cast of characters utter an indeciferable language garbed in veils, aprons, bowler hats and pantaloons.  They move through a bizarre house featuring over four centuries of architectural styles. Sullivan has written her own language based on old theories of Neanderthal language. The script is penned in this language and spoken in sharply timed speeches in a parody of theatrical interpretation; at times, the characters also harmonize in gospel songs of gibberish. The actors (they could be also called dancers) perform an ongoing choreography, their jerky movements interspersed with ballet-esque dance excerpts reveal a parallel to the architecture; historical in some sense but also stylistically baffling.

This works well in Sullivan’s intentional historical cacophony of metaphors and signifiers.  She wefts together her work from a multitude of disciplines and artistic techniques. Influences include everything from stage plays and musicals, to historical cinematic dramas, to postmodern dance, to Fluxus performances. It is immediately apparent that Sullivan is a master at compiling disparate skills, the technical and managerial prowess needed to execute such a complex work is only superseded by its conceptual heft. In this piece she has collaborated with director Kunle Afolaya, composer Sean Griffin, choreographer Dylan Skybrook and figure skater Rohene Ward among others. 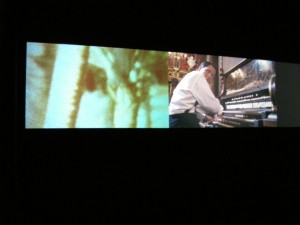 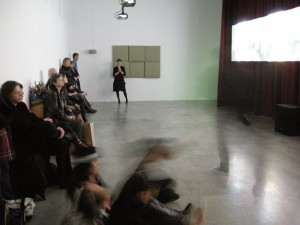 The film follows some narrative arc, but beginning, middle and end, protagonist and villain are enmeshed in a disorienting treatment of time. Throughout the film, subtitles bespeak motivations and events that move the plot forward. However, the bits of text at the bottom of the screen are not easy to piece together, at times revealing a future action, reverting to quoted poetry, illustrating dialogue as in silent films or the voice of a third person narrative. Dr. Obi, Next of Kin, a band of gypsies and their saintly daughter Eulalie, a wealthy industrialist, the missionary and others all enact this eerie melodrama. 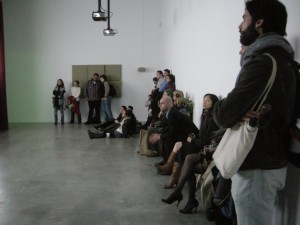 Opening goers stared at the large screens, some with brows furrowed trying to pull some thread of linear time and causal relationships from the piece, while others giggled at the grunts, wheedles and flailing arms.

The work was originally commissioned by and exhibited at the Walker Art Center, in conjunction with A Foundation, Liverpool; Vizcaya Museum and Gardens, Miami and Ella Fontanals-Cisneros Foundation in Miami. 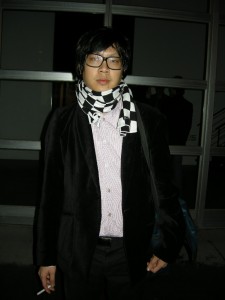 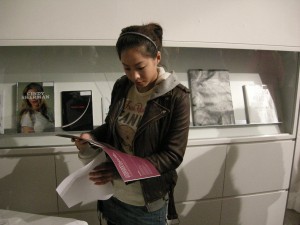 This entry was posted on Thursday, February 7th, 2008 at 6:15 pm and is filed under Art News. You can follow any responses to this entry through the RSS 2.0 feed. You can leave a response, or trackback from your own site.