Home » AO Summary: What’s the significance of that one painting at the Frick?

AO Summary: What’s the significance of that one painting at the Frick? 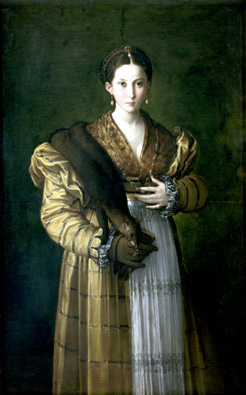 On January 29, The Frick Collection on New York’s Upper East Side opened a one-painting exhibition which has drawn widespread interest. The sole work which is on special loan from the Museo di Capodimonte in Naples, is Parmigianino’s Antea, an Italian Renaissance portrait of a woman.

Mystery coupled with beauty is the key factor that allows this painting to substantiate a four-month exhibition complete with catalog. Although long considered a masterpiece of The Renaissance, little is known for certain regarding the identity of the painting’s subject/sitter, for whom it was created, the date of its completion, as well as Parmigianino’s intended meaning. The exhibition’s curator, Christina Neilson, an Andrew W. Mellon Fellow has spent the last year researching the painting.

Parmigianino’s Antea depicts a woman standing, looking directly at the viewer. Her gaze is so arresting that it asserts her presence as someone real, which is all the more troublesome when one cannot glance over at the description on the wall and place her historically. Speculations about her identity include a wide range of possibilities such as Parmigianino’s mistress, a famous courtesan, the artist’s daughter, the artist’s servant, a member of a Northern Italian aristocratic family, or a noble bride. However, according to the Frick’s press release, “in such portraits, the beauty of the woman and the virtues she stood for were the primary subject, while the sitter’s identity — and even her existence — were of secondary importance.

Here then, the implications of what kind of virtue is being symbolized are equally grabbing. Parmigianino has adorned Antea with items that were commonly given as gifts by potential lovers: a marten fur, gold chain, golden sleeves. According to Neilson, Antea’s pose, playing with the chain and pointing toward her heart implies that she is accepting the lover’s advances. Her direct gaze puts the viewer in place of the lover and forces the viewer into a role more dynamic than that of observing and appreciating an artwork.

Antea was last shown in the United States more than 20 years ago at the Metropolitan Museum of Art.

This entry was posted on Wednesday, February 6th, 2008 at 4:16 pm and is filed under Art News. You can follow any responses to this entry through the RSS 2.0 feed. You can leave a response, or trackback from your own site.