Rare Chinese bronze vessels dating back to the Western Zhou dynasty, belonging to an Asian collector, were expected to sell for record prices at Sotheby’s today, but were left unsold along with other high priced Chinese antiquities. However there was some positive news yesterday at the contemporary sale, where Chinese painter Zeng Fahnzi’s Mask Series No.11 (Triptych) sold for $1.05 million. There are still several days of sales and other events as Asian Week in New York continues.

The annual spring Asian Art week began in New York this weekend. There are several fairs to choose from, more than 100 artists showing at 46 galleries and museums, and over 60 other special events happening throughout the city. The auction houses are in on the action throughout the week, highlights include Christie’s South Asian Modern and Contemporary Art on March 20th.

The International Asian Art Fair will bring dealers from all over the world to show their wares on Park Avenue. At the Gramercy Park Armory the 17th annual Arts of Pacific Asia Show will be held. At the Fuller Building offerings include archaic Chinese bronzes, Indian sandstone sculptures and Sung ceramics.

The economic emergence of the Asian region has captured the attention of worldwide art dealers and collectors. There is more money to be spent, and Asian artists are becoming known worldwide. Contemporary Asian art is rapidly developing as one of the most dynamic sectors on the international art market, with contemporary Chinese painting particularly popular. 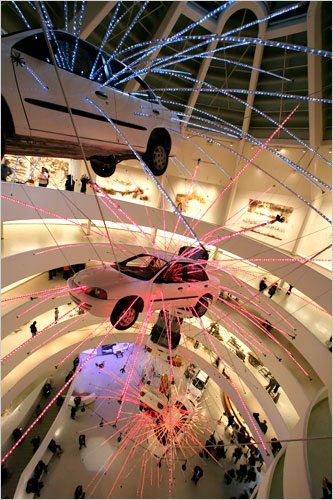 Cai Guo-Qiang at the Guggenheim via New York Times

Asian Contemporary Art Week has organized are many public lectures, screenings, artists talks and other events at museums across the city, including Asia Society, Korea Society, and MOMA. Exhibitions of Asian are are being show all over the city ranging from intimate shows at galleries to the blockbuster “I Want to Believe” by Cai Guo-Qiang at the Guggenheim. A full list of events can be found at acaw.net.

But oh, not the Jim Ellis Automotive Group. The Atlanta-based car dealership company has obtained the naming rights for the 25-year-old food court at Lenox Square mall. in our site lenox square mall

The Jim Ellis Food Pavilion at Lenox Square includes displays and kiosks related to the company’s 12 dealerships, as well as free wireless Internet access at every table. Diners can log in “automagically,” according to a news release, while munching on meals from Chick-fil-A, Great Wraps and the food court’s 16 other merchants. in our site lenox square mall

“While one diner checks out ‘what to drive’, another may opt to check out his or her’hard drive,'” sings a recent news release posted on the Web site of Simon Property Group, which operates Lenox Square. “Jim Ellis’ naming-rights sponsorship marks increased movement by companies to create interactive marketing methods that drive their messages to consumers.” Jimmy Ellis, vice president of Jim Ellis Automotive, believes the food pavilion “gives us an opportunity to place each of our eight different automobile brands in a casual, comfortable environment.” “It’s much like having an additional new-car showroom at the very popular Lenox Square,” he said in a statement.

This entry was posted on Tuesday, March 18th, 2008 at 5:46 pm and is filed under Art News. You can follow any responses to this entry through the RSS 2.0 feed. You can leave a response, or trackback from your own site.