London Auction Activity Round Up 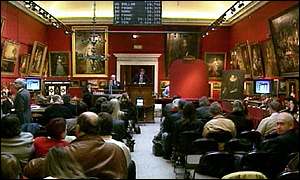 This month has been monumentally beneficial to the Contemporary Art Market. Sales rose over 50% within the past three weeks. Over the last month Sotheby’s, Christie’s and Phillips de Pury hosted a series of auctions in London; each producing record breaking results for at least one of their sales.

The most valuable lot purchased was Francis Bacon’s “Study of a Nude with Figure in a Mirror,’’ with a hammer price of $37.9 million at Sotheby’s. All three auction houses had their annual post war and impressionist sales, and it was not surprising that the Russian and Chinese Art prices rose. The total amount in sales generated, to date, is £245.7 million. Here is a review of the highlights from February’s Auction House events.

Sotheby’s Contemporary Art Sale turned out to the most successful of all the auction houses this month.The Auction was estimated to make £72 million, before fees. The estimate was less than the revenue made at Christie’s finale February auction on the 6th. The auction generated a total of £95 million, after fees. Zhang Xiaogang “Big Family no.1” sold for £1.7 milion pounds. Warhol’s “Three Self Portraits,” sold for £11.5m to an anonymous buyer. Concetto Spaziale, La Fine Di Dio, by Lucio Fontana sold for over £10 million. The lower estimated price was under £4 million. Works by Andreas Gursky, Gilbert and George, Banksy, and Damian Hirst (all whom have been getting wide press coverage lately) were also sold. The auction house made £264.35 million, including fees, for its Impressionist and contemporary sales, in total. Phillips de Pury Contemporary Art Sale started their evening with a charity auction benefiting children with AIDS. (Sotheby’s New York, had a similar benefit February 14th.) The benefit had 39 lots offered and sold 34, leaving only five lots bought in, and generated £6,503,500. The auction generated £28,412,300 and set 15 artist records. The total presale estimate was £23.4 – 34 million, qualifying the night’s auction as justified. Llya Kabakov’s “Beetle” sold for £1,450,000 and was estimated between £1.5 and 2.5 million. Her fellow Russian painter, Erik Bulatov’s “Glory to the CPU,” sold for £1,084,500 and was only estimated between £700,000 – 500,000. Western Contemporary artist turned out some surprising underdogs. John Armleder’s “Untitled” (Mirror and Glass) sold for £94,100 and had an underwhelming low estimate of £15 – 20,000. Gerhard Richter photo-painting entitled “Kerze,” (the Sonic Youth album cover) sold for £8 million, with fees to an American collector. It’s estimated value was £1.8 million, (appraisers underestimated the Sonic Youth “fan factor”.) Phillips has begun to show a rise in profits and marketability. It proved itself able to regain Rudolf Stingel’s reputation, by selling his works after Christie’s failed in an earlier February auction.

Erik Bulatov’s “Glory to the CPSU,” via ArtInfo This Quarter’s top auction seller’s were Francis Bacon and Damien Hirst. At Phillips de Pury’s Contemporary Art sale, Hirst’s 5.18-meter (17-feet) spot painting, “3 – (CHLORO-2-HYDROXPHENYLAZO) – 4,5 – DIHYDROXY – 2,7 – NAPHTHALENEDISULFONIC ACID,” sold for for £1.8 million, including fees. The painting was bought by New York agent Philippe Segalot. The total presale estimate was £1.5 million – 2.5 million. Francis Bacon’s “Study of a Nude with Figure in a Mirror,” sold at a record price of £19,956,500 million with fees. However, non of the lots reached their lower presale estimates. Sotheby’s had a Guarantee on the Bacon, whereas Christie’s did not. “Study of a Nude with Figure in a Mirror,” Francis Bacon via artobserved

Christie’s Auction Sales weren’t as lucrative this month, as Sotheby’s and Phillip’s events. However, they did make some record breaking sales. They were responsible for the first sale of a Russian collectible ski poster (shown above.) The poster, dated 1952, had an estimated price of £600 and sold for £36,500. Lucio Fontana’s painting, “Spatial Concept, Waiting (Cut)” sold for the hammer price of £6,740,500. The lot had the estimated value of £3.5 – 5.5 million. Christie’s final results for February totaled hirer than 2007. The auction house did not generate as much revenue as the other auction house’s sales and had fewer auctions in total.

Marketing Weekly News September 25, 2010 The 2011 Entertainment Book is loaded with more two-for-one offers for dining, shopping, travel, movies, attractions and services – and even includes Bonus Cards worth up to $30 in instant additional savings with no minimum purchase amount required.

Additionally, Entertainment is rolling out smartphone applications that allow members to access information on coupon offers available in their area, wherever they may be. These GPS-enabled applications will work with three of the major smartphone providers – Apple’s iPhone, Google’s Droid and Research in Motion’s Blackberry. go to site free blackberry apps

“We have a loyal following of millions of savvy savers who look to Entertainment as their primary source for value,” said Entertainment’s Chief Marketing Officer Melissa Fisher. “We want to reward our customers with even more value, and with the ability to access our offers anywhere, anytime.” All Entertainment Books contain hundreds of high-value discounts, and the 2011 editions have on average almost 10 percent more pages than last year. Entertainment Books contain discount offers from local restaurants, movie theaters, grocery stores, car care centers, events, outdoor attractions and other services, as well as regional restaurants such as TGI Friday’s, Pizza Hut, Steak & Shake and Cold Stone Creamery, national travel companies like American Airlines, Avis and Expedia and multi-store chains such as Aeropostale, Dick’s Sporting Goods, Costco and Old Navy.

With the 2011 Book, consumers in most of Entertainment’s 130 markets will also find Bonus Cards that provide additional immediate savings from participating merchants. Depending on use, a consumer can typically save an additional $30 from popular restaurants, retailers and attractions, with no minimum purchase amount required.

“The Bonus Cards help make the 2011 Entertainment Book the best deal we’ve ever offered,” said Ms. Fisher. “We expect the added-value will help our fundraising partners have even greater success – and that means increased funding for worthwhile school and community projects.” Entertainment Book memberships are primarily sold through fundraising organizations, like schools, churches and community groups. Entertainment members receive the reward of great discounts, as well as the knowledge that they are doing something important to improve their community. In the past five years, sales of Entertainment products contributed over $350 million to communities across North America. web site free blackberry apps

In addition, books are available for purchase directly from the Entertainment website, entertainment.com. Books are also available beginning in October at many major retailers, including Walgreens, Barnes & Noble and Borders. Every book comes with an online membership included and a majority of merchants offer additional discount online throughout the year. Anyone who purchases a book through the Entertainment website or at a retail location can give credit to a fundraiser when they register it online.

For more information on Entertainment, the markets that it serves and the great values it offers, visit www.entertainment.com. Entertainment is also accessible at facebook.com/getcoupons.

This entry was posted on Monday, March 3rd, 2008 at 11:04 am and is filed under Art News. You can follow any responses to this entry through the RSS 2.0 feed. You can leave a response, or trackback from your own site.

One Response to “London Auction Activity Round Up”