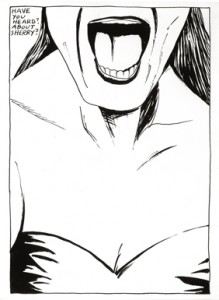 “untitled” by Raymond Pettibon via BFAS

From May 22 through July, 19, BFAS Blondeau Fine Art Services in Geneva is hosting the new exhibition of Raymond Pettibon entitled “Punk Epocha” which is composed of 70 drawings from the eighties.

The American artist was born in Arizona and is known in part for drawings mixed with text.  The drawings in the BFAS show are made of ink and watercolour on paper.  The subject of his drawings are American culture with recurrent images such as flames, speeding automobiles, bombs and explosions. 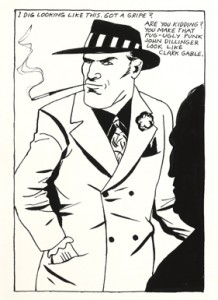 Raymond Pettibon became an artist through a relatively unusual path.  He started in the late 70’s creating posters, and album covers for punk bands such as Black Flag, though Pettibon is quoted as saying
“I never felt restricted by the association with punk.”   “My work never had anything to do with illustration, or commercial art, or advertising.  The fact that some of my drawings were used for record covers or advertisements doesn’t matter.” 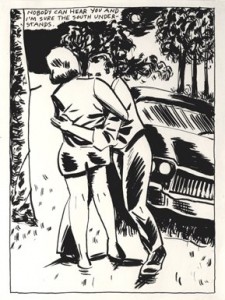 “Nobody can hear you” via BFAS

Raymond Pettibon has exhibited in Barcelona’s MACBA (2002), the Museion (the Museum of Modern and Contemporary Art of Bolzano, Italy) (2003), the Vienna Kunsthalle (2006) and at Hannover’s Kestnergesellschaft (2007). 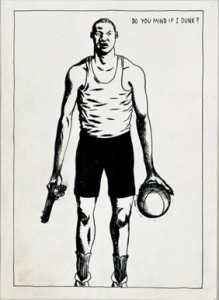 “Do you mind” via BFAS

Press of Atlantic City April 11, 2007 | VANAMAN, JOYCE VINELAND – Danny Brown, 48, describes herself as “a Jennifer of all trades.” Devin Brown proudly calls her his mom.

It was Devin, now 23, who urged Danny to enroll in Cumberland County College as he had done, but it was Danny who urged her son to run for the chairmanship of the Student Senate … and she ran for vice chairman.

You may see them riding their motorcycles from their home in Heislerville to Vineland, or you may find them immersed in activities at the college.

“Devin and Danny are an interesting team – our first son and mother to head the Student Senate,” said Kellie Slade, director of student life and athletics. “Both are dynamic, but have different leadership styles and can reach more students. They both have a good sense of humor and are good leaders.” Looking at Danny, who is 5-feet, 11/2-inch tall, it’s hard to imagine that she was a tractor-trailer driver for a year and later a heavy equipment operator for three years for the International Union of Operating Engineers. see here cumberland county college

“That was mostly paving work, and Devin would come and watch me when he was a child,” Danny said.

“I was a chef for 13 years,” Danny said. “I had on-the-job-training. Devin was my sous-chef when he was 14. I worked at that job summers. Now I enjoy people cooking and serving me.” Danny said she learned welding at the Champlain Valley Technical Center in New York state, where she also studied graphic arts.

“Ultimately, I want to make statues,” she said.

Danny likes sculpture, painting and graphics, and hopes some day to open a store in Burlington, Vt., where she would sell her pottery, sculpture and health foods. web site cumberland county college

Both have had poems published in anthologies.

Devin, who will graduate in May, has been accepted at Rowan University and is planning to major in political science. He’s considering becoming a lawyer. “I want to do something to help people,” he emphasized.

A former resident of Plattsburgh, N.Y., Danny is a liberal arts/humanity major and expects to graduate in May 2008.

“I started college in 1981 at Plattsburgh State University before Devin was born,” Danny said.

She later studied online through Kaplan University in Iowa, which she said was expensive.

“Devin convinced me to come to Cumberland County College,” Danny said. “He has more common sense than I have. A lot of my drive for schooling is to finish what I started – a self-affirmation.” Both take their Student Senate leadership roles very seriously.

Fundraisers to help worthy causes like Big Brothers/Big Sisters of Cumberland and Salem counties; hands-on work at food kitchens, nursing homes and other places on Martin Luther King service days; and sponsoring special events like Mr. Cumberland County are among the many projects that Devin and Danny feel are worthwhile.

“I’ve seen a lot of campuses, and Cumberland County College is the best campus I’ve been on,” Danny said. “Being on the Student Senate executive board, I get to participate in almost everything on campus.” “President Ken Ender is very progressive and has great vision,” Danny said. “The rest of the staff and faculty are very involved with the students and really care about them.” Danny is also a member of Phi Theta Kappa and of the Student Pathways Leadership Program.

Danny said that among her interests, which include playing guitar, her two current favorite hobbies are woodworking and motorcycle riding. Devin’s main hobby is writing, especially poetry.

During the winter session, Danny and Devin had their first class together – speech – and said they enjoyed it.

“Speaking as a parent going to college with my son, I consider myself to be extremely blessed in the relationship that we have that enables us to do this together,” Danny said. “I think I’m very fortunate to have this opportunity.” “I’m glad that I encouraged her to go back to college,” Devin said. “She’s got this great drive, and she’ll figure out things and find a way to do them.” VANAMAN, JOYCE

This entry was posted on Saturday, May 31st, 2008 at 10:15 pm and is filed under Art News. You can follow any responses to this entry through the RSS 2.0 feed. You can leave a response, or trackback from your own site.