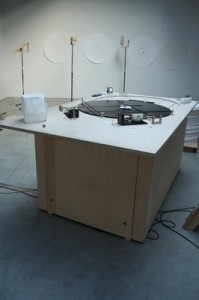 Part of a series of experiments investigating sound and image by Danish-Icelandic artist Olafur Eliasson, this installation at Tanya Bonakdar Gallery in Chelsea actually invites visitors to “make drawings.” Between 4 and 5pm viewers can participate in Eliasson’s piece by playing a stringed instrument which triggers laser projections and a drawing machine, giving visual form to sound. 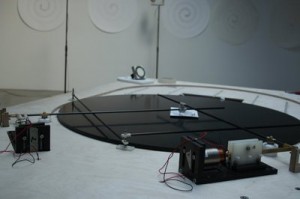 Spatial Vibration continues Eliasson’s interest in activating the space of the viewer and investigating the nature of perception. His large retrospective, Take Your Time, is on view at the Museum of Modern Art and the P.S.1 Center for Contemporary Art until June 30th. Eliasson will also unveil New York City Waterfalls June 26th, consisting of four massive man-made waterfalls along the East River and lasting until October 13th. 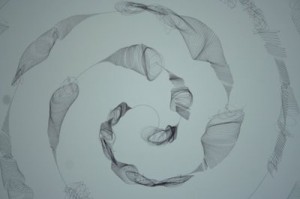 Detail from drawing from Spatial Vibration via spatialvibration.blogspot

This entry was posted on Friday, June 6th, 2008 at 5:22 pm and is filed under Art News. You can follow any responses to this entry through the RSS 2.0 feed. You can leave a response, or trackback from your own site.