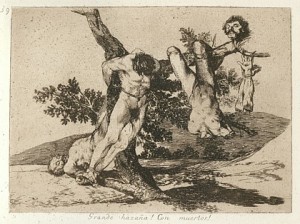 Through August 1, the Peter Blum Gallery in New York presents Goya’s print series “The Disasters of War”, a portrait of cruelty, aggression, atrocities, and man’s inhumanity towards his fellow man.  Violent, gore filled, and graphic in nature, Goya depicts Spain’s War of Independence against Napoleon. 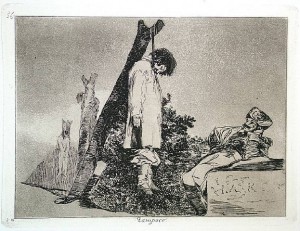 Goya, The Disasters of War via ArtNet

Bodies, dismemberment, missing limbs scattered about, Goya’s work ventures into the post-war famine, grief, and allegorical figures. As Goya was at the time of these works over 60 years old and deaf, it is unlikely he witnessed first hand the all of the atrocities he depicted, however his portrayal serves as profound statements on war. 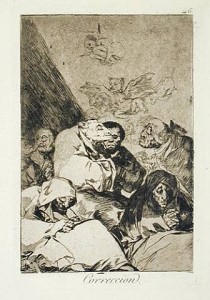 This entry was posted on Friday, June 20th, 2008 at 6:15 pm and is filed under Go See. You can follow any responses to this entry through the RSS 2.0 feed. You can leave a response, or trackback from your own site.