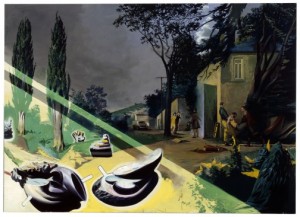 From May 12 through June 21, David Zwirner (in Chelsea) is hosting the new exhibition of the German artist Neo Rauch. This will be the artist’s fourth solo exhibition. In this show, Rauch creates an enigmatic environment evoking depression, fear, and vulnerability. 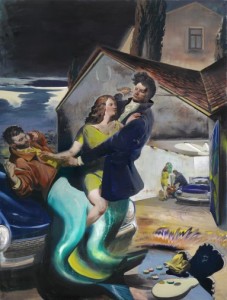 Neo Rauch does not necessarily create a cohesive group of works for an exhibition, but instead the works all have similar characteristics: colors, symbols, and forms. In this exhibition, many of his works are related to manual labor or indeterminable tasks work against “backdrops of mundane architecture, bizarre and often barren landscapes, or domestic interiors” of the 19th century. 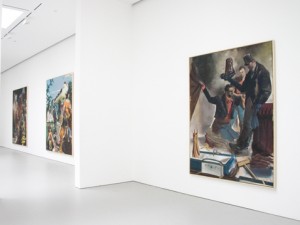 Rauch is considered as one of the most influencial painters of his generation and upholds the tradition of “Leipzig figurative painting”. The artist transforms typical industrious scenes into dreamscapes, transporting viewers to a deeply personal, enigmatic and symbolic universe. 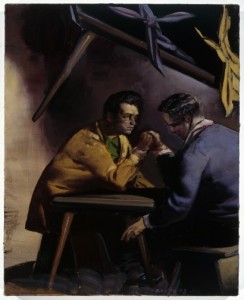 This entry was posted on Wednesday, June 4th, 2008 at 6:33 pm and is filed under Go See. You can follow any responses to this entry through the RSS 2.0 feed. You can leave a response, or trackback from your own site.