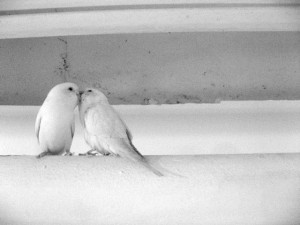 Of note is that the artist himself wrote the press release concerning the show 5 years earlier:

“I remember too the 3 months after the opening of our first show when we only sold 2 sculptures and Javier and I felt completely miserable cause we thought we would strike it big with money.

I rememeber telling Javier he was crazy when he said that my sculptures for the whole family show should sell at 1000 dollars a piece and I told him to get a grip and that he should really sell them for 300 dollars or something like that.

I remember how excited we were when Phil and Shelley Aarons (they are forever my other daddy and mommy) bought the first thing from the show, which was the owl shelf with the big fake diamonds for eyes” 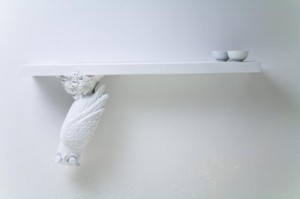 The exhibition takes place in the basement of Peres Projects, and the show is filled with white powder. The room is totally white, and in the show are many disparate objects, also white, such as plates with the image of a young man, an E.T, figurine, a radio, towels etc. 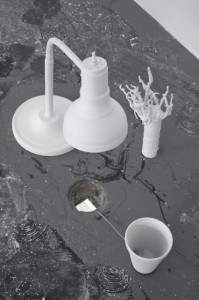 Untitled by Terence Koh via Peres Projects in L.A

Terence Koh (was born in China and lives now in New York City. Koh has exhibited internationally at galleries and museums such as the MuHKA Museum in Antwerp, Wien Secession in Austria, the Whitney Museum of American Art in New York, Kunsthalle Zürich in Switzerland, and The Royal Academy in London. His work was also shown at Art Basel, and is included in several prominent collections including the Saatchi Gallery and the Judith Rothschild Foundation. 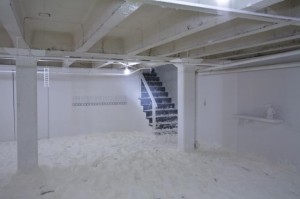 The gallery covered with white powder via Peres Projects

This entry was posted on Tuesday, June 10th, 2008 at 6:01 pm and is filed under Go See. You can follow any responses to this entry through the RSS 2.0 feed. You can leave a response, or trackback from your own site.