Jake & Dinos Chapman: Bedtime Tales for Sleepless Nights
(Jake Chapman and Dinos Chapman, 2010)
Read More and Buy↠
Home » Go See: The Chapman Brothers, White Cube, Mason’s Yard, London: “If Hitler Had Been a Hippy How Happy Would We Be” through July 12

Go See: The Chapman Brothers, White Cube, Mason’s Yard, London: “If Hitler Had Been a Hippy How Happy Would We Be” through July 12 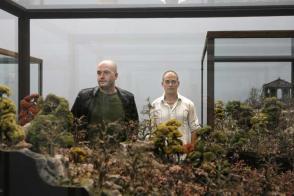 From May 30th to July 12th the news collection from the Chapman brothers, If Hitler Had Been a Hippy How Happy Would We Be will be on display at the White Cube Gallery in Mason’s Yard London.  The show includes a remake of the Chapmans’ original piece Hell entitled F****** Hell and the defacement of watercolors created by the hand of Hitler and a series of classic oil portraits.

The original piece Hell (1999) which was acquired by Charles Saatchi, was destroyed while in storage at the Momart warehouse in London in 2004. F****** Hell, the remake, is greater in size and detail than the original. It consists of 9 glass cabinets arranged such that they form a swastika shape. Held within the cabinets are thousands of mini figures carrying out or serving as casualties of horrific violent deeds. 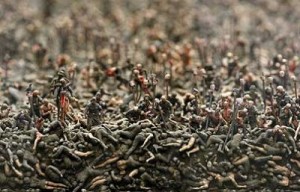 Much of the Chapman brothers’ reputation lies in the defacement of the works of others such as Goya and Hogarth. Here they have taken 13 of Hitler’s watercolor paintings and added an assortment of psychedelic-like features. Before Hitler started on his path to becoming one of the worst dictators in history, he had actually had his try at art school but was rejected.

Hitler defaced via the Times

The collection has found criticism questioning the intent of the work.  White Cube’s director, Tim Marlow is keen to stress that the works are not paying homage to Hitler.  Instead, it is the psychological aspect that has attracted the Chapman brothers to Hitler’s work. The brothers commented on the banality and poor artistic quality of the watercolors, and that there is no visual indications of Hitler’s future crimes to come. Their overriding question refers to the consequence of Hitler not having made it into art school. If Hitler had, the Chapmans’ ask, would his contribution to history still have taken the same direction? 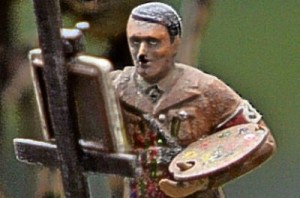 Figurine of Hitler via Evening Standard

This entry was posted on Tuesday, June 10th, 2008 at 6:00 pm and is filed under Art News, Periodicals. You can follow any responses to this entry through the RSS 2.0 feed. You can leave a response, or trackback from your own site.