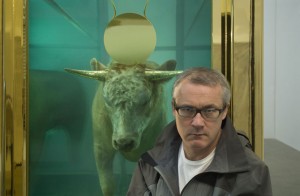 Sotheby’s in London has recently announced that Damien Hirst will be auctioning off a number of newly created works at the sale: ‘Beautiful Inside My Head Forever’ on September 15 and 16. The highlight of the sale is Hirst’s Golden Calf, which is an 18-carat gold encrusted bull submerged in a tank of formadehyde, is expected to sell for $16 to $24 million. This Sotheby’s sale is comprised exclusively of works made by Damien Hirst during the past two years. 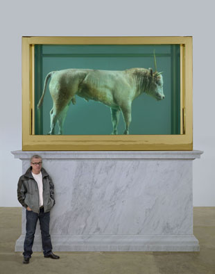 The successful, brand-name artist, Damien Hirst, explained in a joint statement with Sotheby’s that “It’s a very democratic way to sell art…It feels like a natural evolution for contemporary art” (Bloomberg). 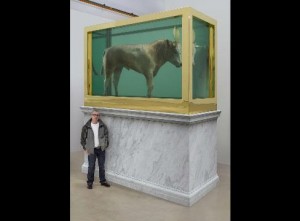 There has been some speculation about how the galleries feel about being left out of the equation. Art Daily has quoted Larry Gagosian as saying “As Damien’s long-term gallery, we’ve come to expect the unexpected”. 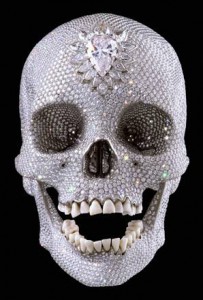 Damien Hirst, For the Love of God via msnbc

Last year, Hirst made news with his platinum cast skull covered in 8,601 diamonds when it sold for $100 million. The star of this upcoming sale, The Golden Calf, wears a gold disc on its brow. This is recognized as the same symbol that adorned the brow of the Egyptian cow-deity, Hathor. Although her ancient influence is ambiguous, she is commonly known for being the goddess of love, music, art, and dance.

This entry was posted on Friday, June 20th, 2008 at 4:16 pm and is filed under Art News. You can follow any responses to this entry through the RSS 2.0 feed. You can leave a response, or trackback from your own site.