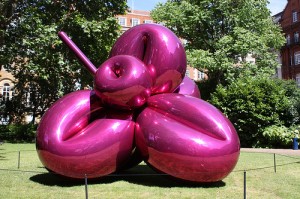 Jeff Koons’ magenta colored Balloon Flower sits in St. James Square waiting to be sold on Monday, June 30th, at Christie’s London. From the series Celebration, the enormous flower was previously owned by the Rachofsky Collection in Texas. It has been deemed the highlight of Christie’s Post-War and Contemporary Art Sale, and is estimated to fetch $23.5 million. 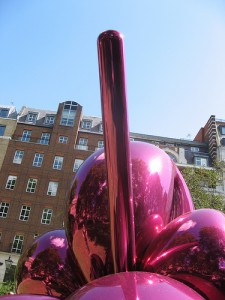 Jeff Koons was interviewed in his studio by the International Co-Head of Christie’s to talk exclusively about his Balloon Flower (Magenta) from the Celebration series.

“I have always enjoyed flowers. Since taking art lessons as a child, I have had flowers in my work. I always like the sense that a flower just displays itself. The viewer always finds grace in a flower. Flowers are a symbol that life goes forward” says Koons, quoted in M. Codognato & E. Geuna via Christie’s

View the video of the interview here via Christie’s

This entry was posted on Friday, June 27th, 2008 at 2:18 pm and is filed under Art News. You can follow any responses to this entry through the RSS 2.0 feed. You can leave a response, or trackback from your own site.