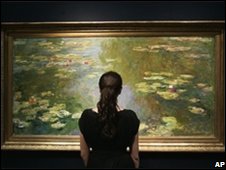 Rarely seen Monet is up for auction at Christie’s [BBC]
Berlin as a new artistic and cultural capital of Europe? [NYTimes]
Jeff Koons joins Gucci jury for Venice film festival in September [Variety]
The ‘Artek Pavilion,’ sold as an art piece by Sotheby’s, can be used as display space for collectors[NYSun]
“Louise Bourgeois: the Spider, the Mistress and the Tangerine” showing at New York’s Film Forum [Film Forum]
16 Young British Artists reunite in London for “Freeze 20”[ArtInfo]

Disney Online Gets Down to Kid Business.

Chicago Tribune (Chicago, IL) May 11, 2003 Byline: John Schmeltzer May 11–So much for the neighborhood lemonade stand.

Instead, if the folks at Disney Online have their way, kids ages 9 to 12 will be spending even more time in front of the computer, learning business techniques they can use to leverage their way into larger endeavors. in our site hot shot business

Disney, in cooperation with the Kansas City, Mo.-based Ewing Marion Kauffman Foundation, has rolled out Hot Shot Business, in which kids can open their own virtual pet spa, skateboard factory or comic strip. Once open for business they are forced to react quickly to demanding customers or big news to remain in business.

“Hot Shot Business is intended to plant the seed among kids that being an entrepreneur is a real option–an option that not only provides opportunities for them, but benefits for their communities and our nation,” said Carl Schramm, president and chief executive of the foundation, which seeks to promote entrepreneurship and improve the education of children.

“Our production team really ran with the concept. And the kids who have tested Hot Shot Business for us have given it rave reviews,” he said.

Schramm, who believes the game will make the lemonade stands he grew up with a thing of the past, said the game will help prepare the country’s next generation of business owners and leaders.

This entry was posted on Tuesday, June 24th, 2008 at 10:24 am and is filed under Go See, Newslinks. You can follow any responses to this entry through the RSS 2.0 feed. You can leave a response, or trackback from your own site.