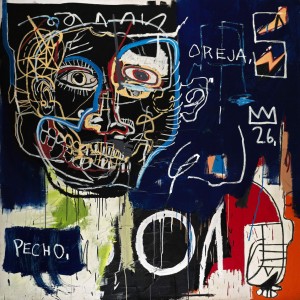 The band U2 is projected to receive up to 6 million pounds ($17.7 million) for the sale of a painting done by Jean-Michel Basquiat. The painting, Untitled (Pecho/Oreja), was acquired by U2 at the Robert Miller Gallery in New York in 1989, and has been hanging up in their Dublin studio for almost 20 years. The painting goes up for sale at Sotheby’s on July 1st. 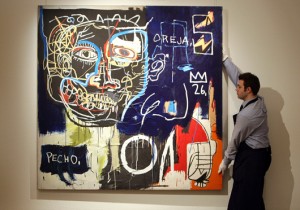 Untitled (Pecho/Oreja) was made in 1983 when Basquiat was met with substantial success. This painting depicts his primitive style and one of his stylized mask-like heads.

“It seems especially appropriate that a work by Basquiat should end up in a music studio, since so much has been said about the relationship between his art and music,” said Oliver Barker, of Sotheby’s Contemporary Art department. (BBC) 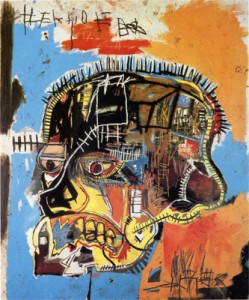 Basquiat got his start in the 1970s as a graffiti artist in New York. Throughout his short career as an artist, he came to embody the youth culture of the 80’s, while addressing issues surrounding the African Diaspora. 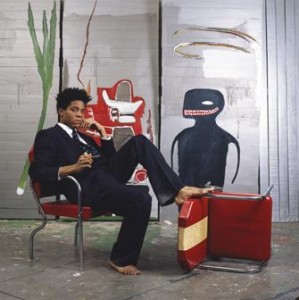 Jean-Michel Basquiat in his studio, 1985 via Brooklyn Museum, Lizzie Himmel

In the early 1980’s he befriended and collaborated with Andy Warhol. Jean-Michel Basquiat died in 1988 of a drug overdose. 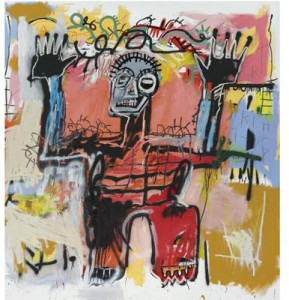 This entry was posted on Monday, June 16th, 2008 at 11:31 pm and is filed under Art News. You can follow any responses to this entry through the RSS 2.0 feed. You can leave a response, or trackback from your own site.

One Response to “U2’s Jean-Michel Basquiat work on Sotheby’s block for $17.7M”