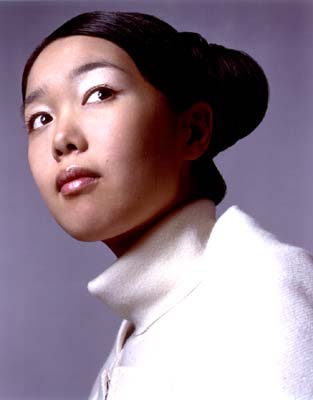 The Baltic Centre for Contemporary art presents an exhibition of the new works of Mariko Mori from through September 14. The New York based artist, who works often in video, is branching out into different mediums in this exhibit. Mori has paintings and drawings showing her recent interest in Brane cosmology and particle theory. She also has 8 diachronic images on glass exploring consciousness, which has no borders.

Mori is well known for her self portrait and video work which dealing with imagination and fantasy.  Her current works deal with cultures and their relationship to nature, taking on an abstract form.  Mori believes that technology is a tool of evolution and a way for society to get back in touch with nature. Mori was born in Tokyo and worked as a fashion model in the late 1980’s, an experience which is reflected in her early works.  The underlying theme through most of her works is the juxtaposition of Eastern mythology and Western culture.

In 1992 she was part of New York’s Whitney Museum’s Independent Study Program. Mori was one of the “indisputable” stars at the Venice Biennale in 1997. Her work has been seen in many places around the world, such as the Los Angeles County Museum of Art, the Andy Warhol Museum, Pittsburgh, the Serpentine Gallery in London and the Museum of Contemporary Art, Chicago.

The sweet savory spice of Gingerbread.(Technology)

Manila Bulletin April 18, 2011 MANILA, Philippines — Since the release of Android 2.2 (FroYo) in the first quarter of 2010, Frozen Yogurt has been basking in its own sweet success as evidenced by the vast number of mobile phones and tablets that have adapted this version. Soon after however, Gingerbread (Android 2.3) followed suit and was actually fully baked by the end of 2010. But even so at present, only a few mobile gadgets have taken a bite of this version. Luckily, the MB Techlab has acquired the highly anticipated “PSP phone”, one of the chosen few that has already adapted a hearty bite of this chewy, savoring sweetness of the Gingerbread.

Needless to say with Gingerbread, Android can readily claim their growth but in terms of the whole system reaching its maturity. Evidently, a faster and smoother user interface experience would be the first thing that you would notice out of the numerous features this sweet dessert offers. It may sound a cliche, but the satisfaction of taking a bite from this gingerbread almost felt like taking a bite from an apple. I guess refinement would be the more appropriate term. In all its simplicity and ease, everything seemed to be more polished and definitely with Gingerbread, android has reached (well almost, as it really felt like it) its state of perfection. here google gravity download

Comparing the PSP phone (Gingerbread) with Motorola Milestone 2 (Froyo), differences can readily be seen on their respective homescreens. Reading on Gingerbread features, they say it presents with new user interface themes. Quite noticeable though, the themes seemed to be more of the darker or deeper shades making the icons really pop out and look so alive. These darker themes somehow does a lot when it comes to saving much power, which coincidentally is one of the main features of the Gingerbread. But contrary though to having a darker theme that makes all icons look better and brighter, the PSP phone still have themes that are relatively bright; but even then, icons really just look better and more vivid; definitely eye-catching.

Gingerbread features a new improved, redesigned on-screen software keyboard that makes typing a lot easier and enjoyable. Its keys were somehow reshaped providing ample space between keys. It is faster, much more responsive and spontaneous. There is quite an improvement in its copy paste feature. Somehow it seemed that I had mastered the art of copy pasting as this task that I used to find tedious and difficult now became really easy. A simple “press and hold” will do. here google gravity download

Android 2.3 enunciates a big leap to android games as it now supports gyroscope, linear acceleration, rotation vector, gravity and barometer sensors. All these cool features would only mean that no sooner than you think there will be more motion sensitive games that would be available in the Android market that are as excillerating and exciting as the other game consoles. The PSP phone that MB has at hand can attest to this as this is definitely a good sign of something bigger and better gaming experience to come.

As mentioned earlier, a more refined and polished experience will be the first thing that you will notice and this includes an organized management of power, applications and downloads. There is a designated application manager shortcut on the homescreen to better manage and or arrange your apps or if you need to shut down power hungry “idle” apps.

There is also an integrated Download Manager that will keep track of all your downloads. The system will actively close unnecessary idle apps that are running and likewise draining too much power in the background. Truly, quite an organization that effectively improves the device’s overall performance and battery life.

By far, I am very much pleased with what the Milestone 2 FroYo can provide when it comes to networking; even up to its Wifi hotspot functionality (remember it can connect up to 6 devices). All these of course can still be found on the PSP phone Android 2.3; but in addition, Gingerbread can now support NFC or Near Field Communication that will allow you to use your smartphone as a mobile payment device. Cool isn’t it? But beyond that, I am pretty sure Google has more plans on its sleeve with the NFC feature apart from just making mobile payments.

Android 2.3 can support extra large screen size as well as multiple cameras hence, mobile gadgets with front facing cameras would now have a better use for them apart from self shot photos.

This entry was posted on Wednesday, July 30th, 2008 at 2:25 pm and is filed under Go See. You can follow any responses to this entry through the RSS 2.0 feed. You can leave a response, or trackback from your own site.