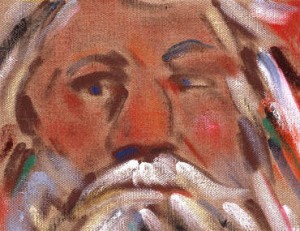 Recently appointed Royal Academician, artist Tracey Emin has curated a gallery at the current Royal Academy Summer Exhibition which is the institution’s 240th event of this kind. The exhibition, whose theme this year is ‘Man Made’, is a well-recognized annual event in the contemporary art world and includes works from approximately 1,200 artists, both established and emerging.

Notorious for the execution and subject matter of her pieces as well as her expressive presence, Ms. Emin’s artwork has encompassed everything from major installations, videos, drawings, sculpture, needlework, photography and painting. Her curatorial contribution to this year’s summer show, which focuses on featured artists although also includes personal work, was a highly anticipated event – and she did not disappoint. 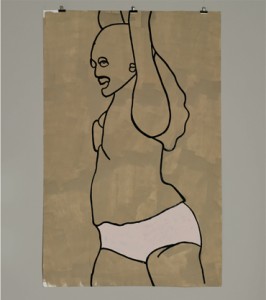 To Be Continued, Gary Hume, via Royal Academy of Arts

Housed in Gallery VIII, apparently some of the works which were selected by Ms. Emin inspired controversial reactions from other Royal Academy governors, as well as members of the viewing audience, who seem divided in their opinion of her curatorial debut at the show. For all would-be visitors, there is a sign outside of her gallery which warns that some of the exhibitions “may cause offense”. Upon entering, one is able to explore their own perspective in conjunction with that of Ms. Emin whilst viewing the works of artists such as Mat Collishaw, Elke Krystufek and Sigalit Landau. Their pieces, respectively, consist of an automaton depicting a life-sized zebra having sex with a woman, a collection of photos of menstruating women with their hands covered in blood, and a video of a naked woman on a seashore Hula Hooping with barbed wire. There are also less disputed, but no less significant, pieces in the gallery including a sculpture by Louise Bourgeois, a large canvas by Julian Schnabel, a totemic ceramic centerpiece by Tatiana Echeverri Fernandez and a painting on paper by Gary Hume (Pictured above). 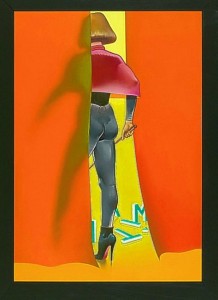 In regard to her own stance regarding the show, the artist told The Times that there was nothing controversial about the exhibition. Other supporters have also come forward with words of praise and support, including fellow RA curator Humphrey Ocean, who has stated in the Daily Mail that she has taken her responsibility as a curator very, very seriously, and that if she weren’t a bit controversial, you wouldn’t be getting ‘your Tracey’s worth’ albeit in a very intelligent way.

Go see for yourself at The Royal Academy Summer Exhibition on until August 17th.

This entry was posted on Friday, July 18th, 2008 at 12:42 pm and is filed under Art News. You can follow any responses to this entry through the RSS 2.0 feed. You can leave a response, or trackback from your own site.