Home » Olafur Eliasson’s waterfalls: up and on

Olafur Eliasson’s waterfalls: up and on 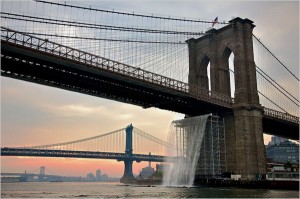 Danish Artist, Olafur Eliasson has completed his $15.5 million New York City Waterfalls project. This sublime installation consists of four free-standing cataracts that have been transformed into 90 to 120 feet of falling water. The waterfalls started flowing yesterday, June 26th and will continue through October 13th. 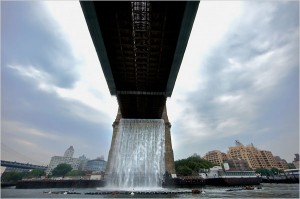 Olafur Eliasson, who works out of his Berlin studio, used a team of over 30 architects, engineers, and builders to assist with the construction of his man-made waterfalls. The New York City Waterfalls are a large project even for Eliasson, who is known for his affinity for working on a massive scale. When the waterfalls are turned on, there will be approximately 12 stories of cascading water at the four locations around New York Harbor: at the base of the Brooklyn Bridge, off the shore from Governors Island, at Pier 35 near the Manhattan Bridge, and off the Brooklyn Promenade. 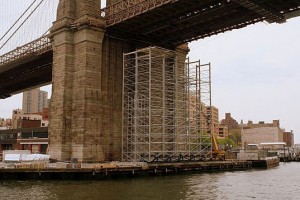 Construction of the NYC Waterfall project by Olafur Eliasson via Inhabitat

The waterfalls were designed to fuse with the pre-existing urban landscape and become incorporated into the movement and flow of the city. The Wall Street Journal quotes Eliasson as saying,”People like to think that public space is neutral and open to all. Actually, it is subject to commercial interests, to the intentions of power elites. Public space is what’s left when everything else has been privatized. We need to create it, we need to nurture it. I didn’t dump down the waterfalls from the moon. I tried to integrate them with the city in a productive way” 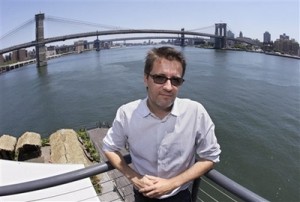 Artist, Olafur Eliasson, in front of the Brooklyn Bridge via Yahoo

The Public Art Fund along with other public and private organizations funded the $15.5 million project in collaboration with the city. The Public Art Fund works with artist to create otherwise impossible public art installations, such as Chris Burden’s What My Dad Gave Me. 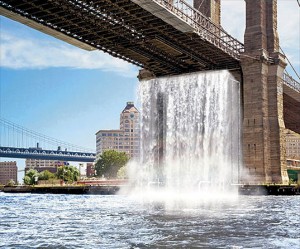 This entry was posted on Tuesday, July 1st, 2008 at 5:40 pm and is filed under Art News. You can follow any responses to this entry through the RSS 2.0 feed. You can leave a response, or trackback from your own site.