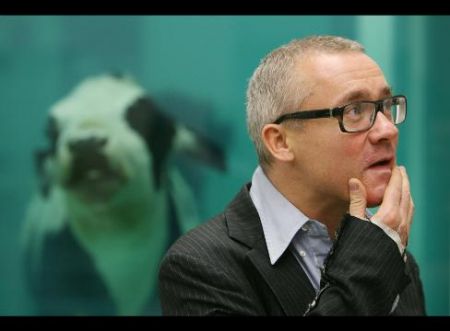 Damien Hirst at the White Cube Gallery via Museum Lab

As previously covered by AO here Damien Hirst, is preparing for his Sotheby’s auction this September and has come out with a new formaldehyde suspended tiger shark, a cow with golden horns and hooves, a unicorn, in addition to spot paintings, and butterfly collages, among many other newly created works made specifically for the all-Hirst auction. The sale, entitled Beautiful in My Mind Forever, will be comprised of 223 lots, and is expected to raise somewhere between $100 million and $150 million over the two-day sale that takes place on September 15th and 16th. The Golden Calf alone is expected to sell at a high of $25 million. The sale is extremely notable as Hirst is circumventing his main dealers Larry Gagosian in New York and Jay Jopling of White Cube in London and going directly to auction. Though Jopling and Gagosian have ostensibly given their blessing, the auction reflects a potentially new paradigm in the the way art is sold. 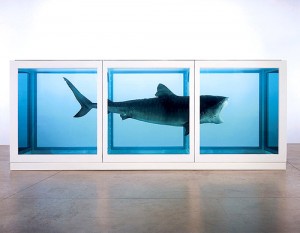 Since Damien Hirst’s dealers, Jay Joplin and Larry Gagosian, are being bypassed, and his pieces are to be sold directly at auction, there has been quite a bit of controversy surrounding this auction. Dealers generally make 40 to 60 percent of the artist’s sale, but for Hirst’s exclusive solo auction there is no necessity for an art dealer, except as a bidder.  Oliver Barker from Sotheby’s says, as cited in the Art Newspaper, “Damien is totally fearless. He’s not just an outstanding artist, he’s a cultural phenomenon.” 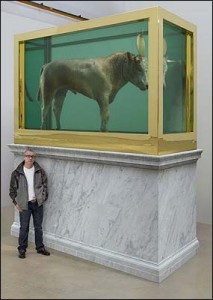 Damien Hirst with The Golden Calf via Telegraph

David Mugrabi, a dealer-collector, explains to The Art Newspaper, “It seems to be a game for Damien. He’s seeing if he can get away with murder, just as Duchamp did with his urinal.” 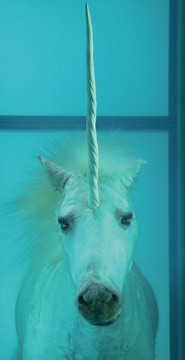 Many are saying that going straight from the artist’s studio to auction will rewrite the rules of the art market. Damien Hirst is known for being a shock-artist, and has had huge financial success in the past with his diamond-encrusted skull which sold last autumn for $100 million. “This is very much Damien Hirst as we know him but done at a level we haven’t seen before,” said Cheyenne Westphal, the chairman of contemporary art for Sotheby’s.

This entry was posted on Tuesday, July 29th, 2008 at 5:15 pm and is filed under Art News. You can follow any responses to this entry through the RSS 2.0 feed. You can leave a response, or trackback from your own site.