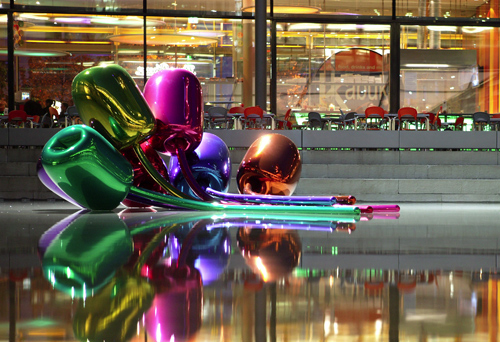 Tulips, Jeff Koons, 1995-2004 on loan to the embassy for the next decade, via artinthepicture

The U.S. spent $800,000 for the works on display, the highest ever for an embassy building. Other pieces were donated. However, with many new constructions adopting a “percent for art” rule, meaning 1% of the budget goes towards art, the U.S. Embassy has been criticized for spending a paltry 0.14%. Another concern is that the public will not be able to easily view the works due to walls surrounding the compound for security reasons. 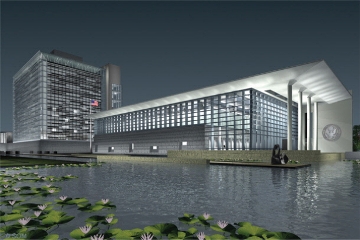 The U.S. Embassy in Beijing, via SOM

Jeff Koons’ sculpture, Tulips, crafted to look like wilting mylar balloons of flowers graces the outdoor pond area of the consular building. It is on loan to the embassy from the artist for the next decade. Landscape artist Maya-Lin has also created a lobby installation, Pin-River Yangtze, which uses 30,000 straight pins to outline the important Chinese river. In the Atrium Office building is Cai Guo-Qiang’s gunpowder drawing, Eagle Landing on the Pine Branch. The work by the major Chinese artist might represent the two countries’ gelling partnership – the eagle and pine tree are commonly recognized symbols in both the United States and China. 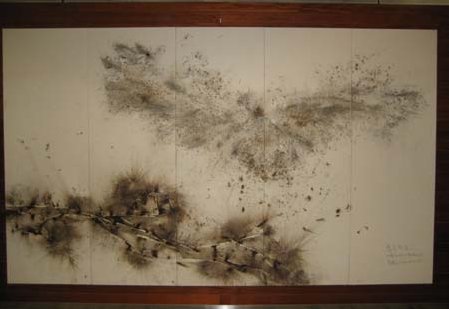 Eagle Landing on the Pine Branch, Cai Guo-Qiang, 2007 via ChinaDaily

This entry was posted on Sunday, August 17th, 2008 at 5:11 pm and is filed under Art News. You can follow any responses to this entry through the RSS 2.0 feed. You can leave a response, or trackback from your own site.

One Response to “Contemporary Art Bridging U.S. and China at Beijing’s Embassy”