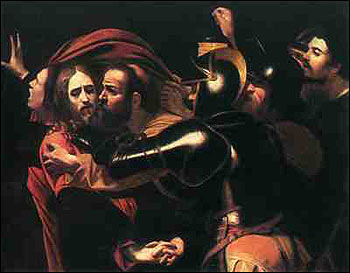 A painting by the master artist Michelangelo Merisi da Caravaggio, The Taking of Christ (Or, The Kiss of Judas) was reported stolen from the Odessa Museum of Western and Eastern Art in the Ukraine. Thieves were able to sidestep the outdated alarm system, and escape through the museum’s roof. Originally purchased by a Russian ambassador, the painting had come into the museum’s hands last century. More details after the jump.

The thieves evidently entered through a window with by removing a pane of glass in lieu of the traditional smashing thereby avoiding the alarm. The frame of the window itself was rotting and in ill-repair making the pane quite easy to remove. Upon entering the room with painting, the thieves proceeded to cut the painting from its canvas, rolling it and escaping through the roof. The robbery took place sometime between the museums close Tuesday evening and Thursday morning (the museum is closed on Wednesdays). Although the London auction houses neglected to estimate a price for the legendary piece, experts estimate it to be worth more than $100 million. A picture of the stripped canvas below. 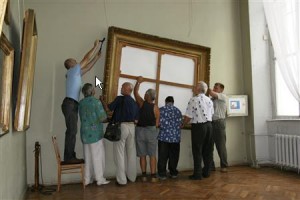 Originally the painting was purchased a Russian Ambassador to France as a gift to a Russian Prince. The painting was most recently restored in 2006 and a duplicate exists in the National Gallery of Ireland. Odessa Police had been urging the museum to upgrade their alarm system since the 1990’s.

This entry was posted on Friday, August 1st, 2008 at 6:37 pm and is filed under Art News. You can follow any responses to this entry through the RSS 2.0 feed. You can leave a response, or trackback from your own site.