Sotheby’s issues earnings report: profit drops by 11% but no longer at a loss 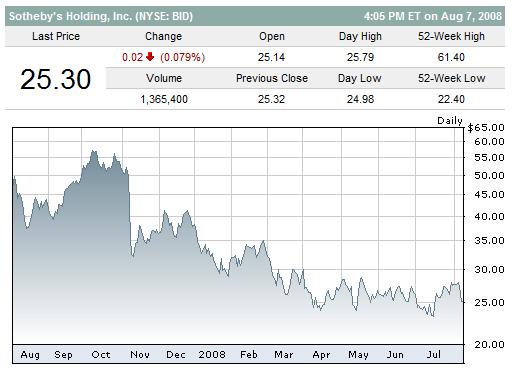 Sotheby’s, the global auction house, showed a decline in profit by 11% in the second-quarter: net income marked $95.3 million ($1.49 per share). This is a drop from $107.3 million ($1.64 per share) versus the same time last year, however it is a net profit versus a net loss from last quarter. According to Sotheby’s, the decline is due to recent change to auction schedule. Chief Executive William Ruprecht assured that while wealthy customers with continues to drive the business, Sotheby’s is less likely to be affected by economic woes. Despite the profit drop the news was seen by some analysts as positive in its show of resilience. According to one analyst quoted by Bloomberg: “The demand side is very strong. It’s driven by commodity wealth, particularly in oil.”

This entry was posted on Thursday, August 7th, 2008 at 7:59 pm and is filed under Art News. You can follow any responses to this entry through the RSS 2.0 feed. You can leave a response, or trackback from your own site.