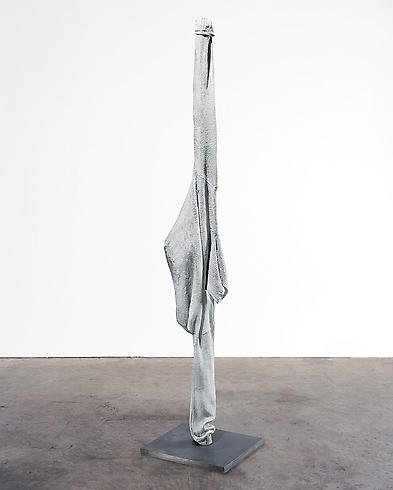 Louise Bourgeois revisits familiar themes in her exhibition Echos, on display now at Cheim & Read. Like Bourgeois’s recent retrospective held at the Guggenheim this past June Echos concentrates on the themes of home, family, motherhood, and sexuality. Echos examines the constructs of the female identity, especially those in conflict such as female/male, organic/geometric, and particular to this exhibit mother/father. Comprised of discarded clothing and aged painted wood the featured sculptures are reminiscent of Bourgeois’s earlier work of the 1940’s and 50’s and serve to represent the familial hierarchies. The gouaches on display depict the relations between mother and child and are influenced in part by Bourgeois’s own role as mother as well as the death of her own mother when the artist was twenty. The paintings which are comprised of blood red paint further the organic aesthetic of the exhibit and mirror the artist’s continual emphasis on nature as seen in her mixed-media exhibit held at the Zurich’s Hauser & Wirth this past June covered here. 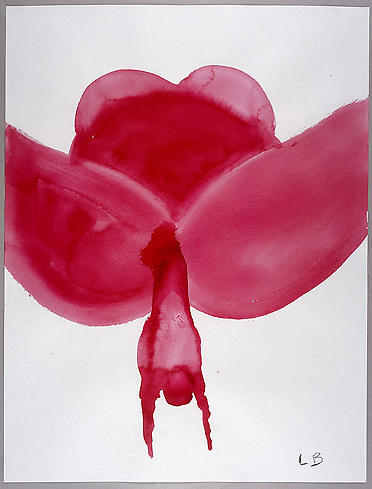 In addition to Echos the Guggenheim currently has on display a full-career retrospective of Bourgeois’s until September 28th. The exhibit was organized by the Tate Modern, London in association with the Centre Pompidou, Paris and includes more than 150 sculptures, installations, drawings and prints. Bourgeois’s has noted that much of her work has been influenced by her troubled childhood and has said of her often dark, sometimes cryptic art “I want to bother people, I want to worry them.” The exhibit will travel to the MOCA in Los Angeles next and then to Hirshhorn Museum and Sculpture Garden in Washington, D.C. 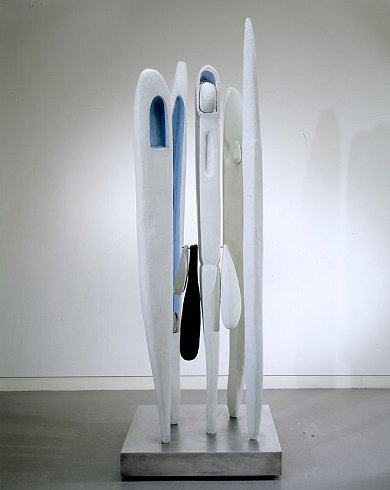 Quarantania a bronze sculptrue painted white from the late 1940’s is akin to sculptures featured in Echos Bourgeois’s current exhibit.

This entry was posted on Wednesday, September 10th, 2008 at 11:00 am and is filed under Go See. You can follow any responses to this entry through the RSS 2.0 feed. You can leave a response, or trackback from your own site.