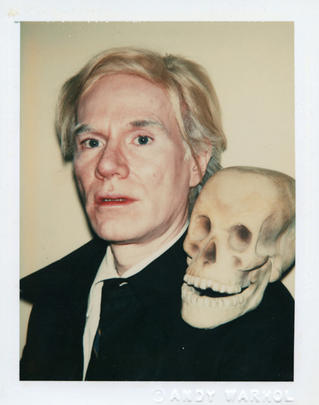 Self-Portrait via The Hayward Gallery, London

Nearly twenty years after The Hayward Gallery in London put on Andy Warhol: A Retrospective (1989), Hayward is now hosting Andy Warhol: Other Voices, Other Rooms, another retrospective of Warhol’s work. Other Voices, Other Rooms, which has been on tour since last October at the Stedelijk Museum in Amsterdam and then at the Moderna Museet in Stockholm, uses Warhol’s film and video work as a starting point to explore the artist’s core subjects, “voyeurism, celebrity, the mundane, blurring distinctions between high and low culture.”

More images and information after the jump 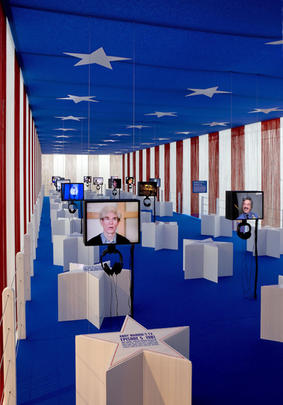 TV Scape, Installation of Andy Warhol: Other Voices, Other Rooms via The Hayward Gallery, London

Other Voices, Other Rooms is organized into three sections, Filmscape, TV-Scape, and Cosmos, housed in settings by designers Chezweitz & Roseapple from Berlin

Filmscape via The Hayward Gallery, London

Filmscape shows 19 of Warhol’s films including screen tests of Salvador Dali and Marcel Duchamp as well rarely exhibitied personal video diaries and a film about Warhol’s mother Mrs. Warhol. TV Scape simultaneously shows all 42 episodes from the three TV series Warhol created for TV stations such as MTV between 1979 and 1987.

Eva Meyer-Hermann, the exhibition’s curator on looking at Warhol:
“Andy Warhol once wondered about how it would be if one mirror would reflect another. He declared that everything which we want to know can be seen on the surfaces of him and his works. I thought I had to look behind these surfaces, but realised that what we are looking for is not behind but in front of them. Warhol’s surfaces reflect the world; his works are about you and me.”

Andy Warhol: Other Voices, Other Rooms is on view at Hayward Gallery, London, October 7 – January 11, 200

This entry was posted on Tuesday, October 14th, 2008 at 2:20 pm and is filed under Go See. You can follow any responses to this entry through the RSS 2.0 feed. You can leave a response, or trackback from your own site.