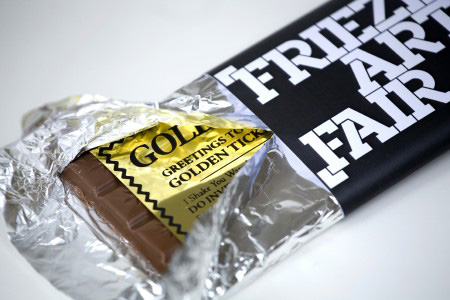 With over 150 galleries, The Frieze Art Fair, set in London’s Regent’s Park, began selling works by over 1,000 artists on October 15. Since its first year in 2003, the Frieze fair has grown to be regarded as the youngest and perhaps the most cosmopolitan and cutting edge of the global fairs, which include Art Basel, Art Basel Miami Beach and the Venice Biennial. The fair, which runs until the 19th of October, and the London auctions that will occur this evening and this coming weekend, mark the first major opportunity for transparency into the the status of the global art market since the widespread financial turmoil began. Following Damien Hirst’s groundbreaking, clearing house, £111.5 million, direct-to-market auction of his own work at Sotheby’s last month (as covered by ArtObserved here) the market has had some clouds brewing over it, with beginning indications of weakness manifesting in events such as Sotheby’s lackluster first evening sale of contemporary Asian art in Hong Kong earlier this month (as covered by ArtObserved here), which sold £7 million against expectations of £30 million to another auction that same weekend in which Sotheby’s sale of modern 20th-century Chinese art left over a third of the lots unsold. More recently, the Singapore Art Auctions were also a dissapointment. 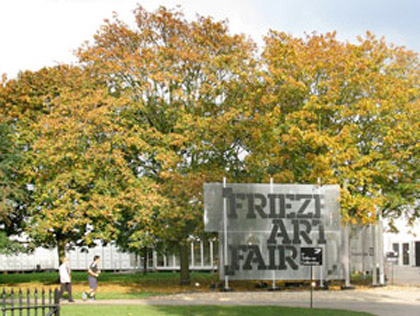 The Frieze Art Fair 2008 at Regent’s Park via Artnet

The Frieze Art fair has grown in short time to be a major event in the art circuit, and as such, irrespective of external financial conditions, it is well attended. Last year drew over 68,000 visitors. This year’s fair already has had bold faced names showing up such as actress Gwyneth Paltrow, Adam Clayton of U2, Christina Aguilera and George Michael (who revealed at the fair his plans to open a gallery). International art players such as Charles Saatchi, Jason Rubell, Adam Lindemann and Dasha Zhukova are also making the rounds in the custom-made pavilion, which was designed by Caruso St John of London, the architects also behind London’s two Gagosian spaces.

A “subdued” environment:
This year however, activity has already been described as “subdued” or “reserved.” Amid a broadening global crisis in the financial system, slower sales and lower prices seem to be inevitable, At least two satellite shows, Year 08 and Pulse, cancelled out of the fair, though the lack of availability of cheap venues was cited. The Directors of Frieze opted not to release a sales report this year, noting to the Independent that such figures are “misleading as many sales are completed post-fair and many galleries choose to keep their sales figures private.” Most however, agree that the pace is markedly slower this year. Todd Levin, who curates New York’s Sender Collection, was quoted as saying: “Marked out of 10, the energy level is about four. People are talking about the financial markets.” The Telegraph quoted Viscount Charles Dupplin, in-residence expert at art insurer Hiscox, as saying: “There are about 200 people in the world who can and will always be able to afford trophy art. But the real market, works valued up to around £1 million, is already dead.” The Wall street journal quoted that the Director of New York’s Lehmann Maupin as saying “We’re aiming for institutions.” Her gallery is offering longer payment programs and less money upfront, as little as 20% from accredited buyers.

Others were more upbeat, Salzburg and Paris gallerist Thaddeus Ropac quoted to the ArtInfo: “If you’d asked me this morning, I would say we were preparing for a slowing of the market, but after 2:00 p.m., it really picked up. Sales are happening less quickly, but we prefer this. The market is going into a soft landing, and that’s what we would wish for.” Gagosian director Victoria Gelfand also reported that “We’ve sold very well so far, surprisingly well, for everything at the $500,000-and-under level.”

More on the Fair:
The Frieze fair includes galleries from over 27 countries including some galleries from newer art markets such as India, China, Russia, as well as Brazil and Argentina. Three times more galleries apply for a presence at the fair than are accepted. The fair, from the beginning, has been sponsored by Deutsche Bank. The genral public can pay to attend the fair until Sunday.

This year’s fair had no lack of noteworthy installations and works, in spite of the measured pace of sales. Before the show even began, New York video artist Cory Arcangel mailed Willy Wonka-esque chocolate bars to all the galleries that applied but were rejected. A “golden ticket,” as pictured at the head of this article, was in a chocolate bar sent to Studiò di Giovanna Simonetta of Milan, which attended the show, and is pictured below.

Last year Richard Prince installed a pink Cadillac and also hired a model to buff it. This year, attendees can find an Antony Gormley sculpture, a Gormley-typical life size human figure, at Salzberg gallerist Thaddeus Ropac’s booth as well as Piotr Uklanski’s large clenched-fist sculpture elsewhere in the main hall. The adjacent sculpture park, curated by David Thorp, in the English Gardens, shows, among other works, pieces by Hary Hume.

This entry was posted on Friday, October 17th, 2008 at 9:49 am and is filed under Art News. You can follow any responses to this entry through the RSS 2.0 feed. Both comments and pings are currently closed.