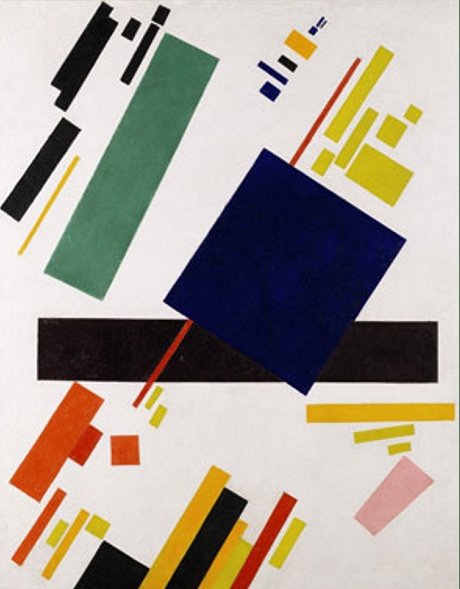 The results of the Sotheby’s New York Impressionist and Modern Art auction Monday night were overall dissapointing, despite some noteworthy lot results of works by Malevich, Degas and Munch. Fears of an art-market meltdown have been fueled by recent lukewarm results at London’s Frieze art fair and the abrupt pulling from the auction of the 1909 Picasso that was expected to sell for over $30 million. While the Sotheby’s evening total on Monday stood at 45 works sold for $223.8 million, it was well below its initial estimates of $337 million to $476 million, which were set over the summer before the financial crisis. The sale was the lowest for an Impressionist evening sale at Sotheby’s since May 2001. David Norman, an executive vice-president at Sotheby’s was quoted by the Guardian as saying “Anyone would expect people to be more circumspect in this environment. We’re selling in a very uncertain world.”

more results and pictures after the jump…

The star lot of the auction was Russian artist Kazimir Malevich’s ‘Suprematist Composition.’ The 1916 abstract painting sold for $60 million, a price that was not only a record for the artist, but a record for any Russian work of art ever sold at auction. However, Sotheby’s employed “irrevocable bids” for several items, including this one, meaning a buyer contractually agrees to purchase the work for an undisclosed sum. The Malevich reportedly sold for the exact price of the irrevocable bid, which was set in more auspicious times.

Another highlight was ‘Dancer in Repose,’ a 1879 Edgar Degas painting (pictured below), which sold for $33 million, below its initial estimate of $40 million. The work, which was sold by financier Henry Kravis to Yasuaki Ishizaka, head of Sotheby’s Tokyo office, still managed to bring in a sum higher than the $27.9 million the collector paid for the work in a 1999 Sotheby’s London auction which, at the time, was the most expensive Degas ever sold at auction until this sale, where the work broke its own record.

The final of 3 marquee sales was 1894 Edvard Munch’s “Vampire,” (pictured below) which sold for the first time in over 70 years of private ownership for $34 million, which was more than its $30 million estimate.

Others did not fair as well, including Seated Man (pictured below), the 1918 Modigliani work that was estimated to sell for $18 million to $25 million but went without a single bid. Likewise, Giacometti’s 1958 painting “Diego’s Head”, sold by William Acquavella and estimated at between $6 million and $8 million, went without a bid. The painting was guaranteed by Sotheby’s for $6 million and proved to be a large loss for the auction house. In the end most works sold for below their estimates, and 25 were not sold at all, such as those by artists such as Wassily Kandinsky, Max Beckmann, Claude Monet, Marc Chagall, Pablo Picasso, Vincent van Gogh and Henri Matisse.

Notable bidders at the sale were the art dealer David Nahmad and ex Goldman-Sachs financier Robert Mnuchin and Larry Gagosian. 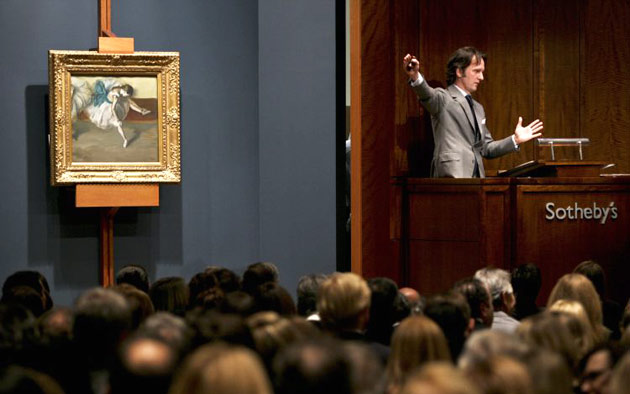 Dancer in Repose by Degas sold for $33 million, a record for the artist, via Guardian UK. The painting was one of the 45 works that sold at auction, though like most other works sold the painting was sold for below its estimated price. 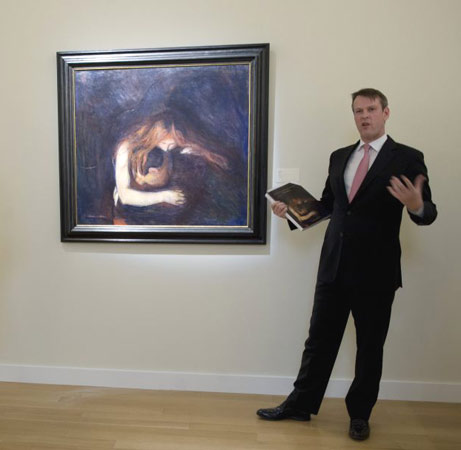 Edvard Munch’s Vampire being shown at a Sotheby’s Press preview, via Guardian UK. The work surpassed its estimate and sold for $34 million. 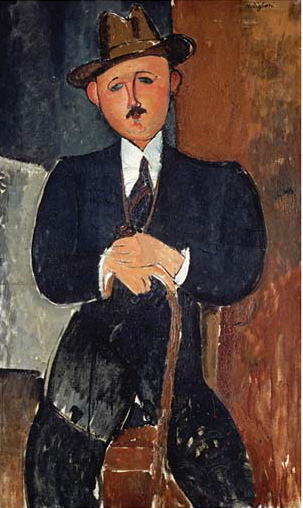 Amedeo Modigliani’s 1918 work Seated Man (Leaning on a Cane) was one of 25 works that failed to sale, via Global Gallery.

This entry was posted on Thursday, November 6th, 2008 at 6:13 am and is filed under Art News. You can follow any responses to this entry through the RSS 2.0 feed. You can leave a response, or trackback from your own site.