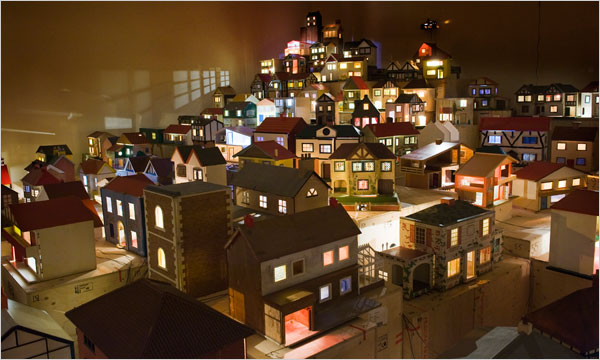 British artist Rachel Whiteread’s installation Place (Village) (2006-08) is currently on view for the first time in The United States at The Museum of Fine Arts in Boston.  This recent work is the centerpiece of an exhibition simply titled Rachel Whiteread which also features a selection of the artist’s earlier pieces including casts of doors, the insides of boxes, and wood flooring, as well as drawings and collages.

More information and pictures after the jump… 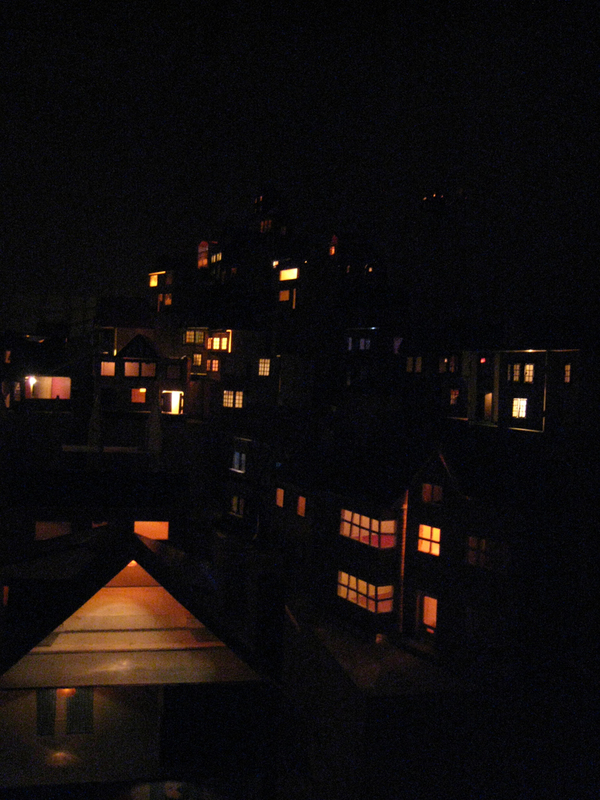 Place (Village) consists of approximately 200 vintage English dollhouses that Whiteread has collected over the last two decades.  The dollhouses, arranged as an English suburb on pedestals of slightly varying degrees, are presented in a dark room and lit from within.

The houses’ architecture ranges from Georgian mansion to mid-century rectangle and all are unoccupied (of dolls) but show remnants of human touch through patterned wallpapers, rugs and curtains.

Place (Village) stands out as more personal and whimsical in contrast to Whiteread’s characteristically minimalist earlier works but continues to highlight similar themes of space, emptiness, and even class disparity.

Whiteread, who in 1993 became the first woman to win the pristigeous Turner Prize is mostly known for her simple monotone casts of overlooked negative everyday spaces such as the inside of a cardboard box or the space inside a room but has also been able to express political commentary in works like House (1993), a concrete cast of the inside of a condemned Victorian house and Invisible Library (2000), a holocaust memorial commissioned by the city of Vienna, Austria.

Examples of Whiteread’s earlier sculptures in the exhibition at MFA include Double Doors II (A and B), 2006–2007, a subtly inverted cast of two doors and Untitled (Amber Floor) 2003, a rubber cast of a section of wood flooring.

Rachel Whiteread is on view at The Museum of Fine Arts, Boston, through January 29, 2009.

.
Rachel Whiteread talks about her show at MFA, Boston

Also on view in Rachel Whiteread at MFA: 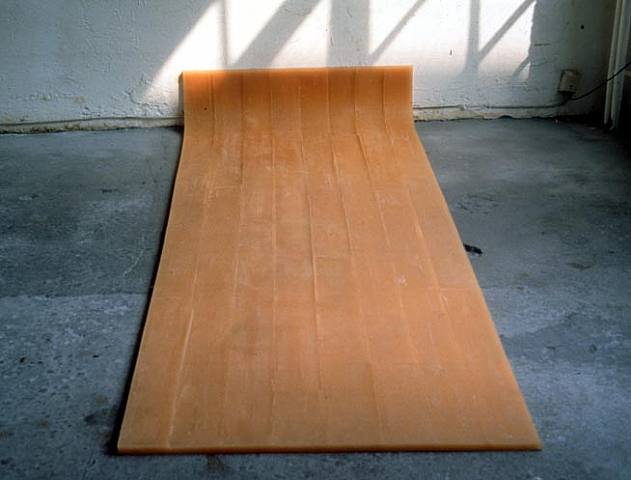 This entry was posted on Friday, November 28th, 2008 at 8:07 pm and is filed under Go See. You can follow any responses to this entry through the RSS 2.0 feed. You can leave a response, or trackback from your own site.