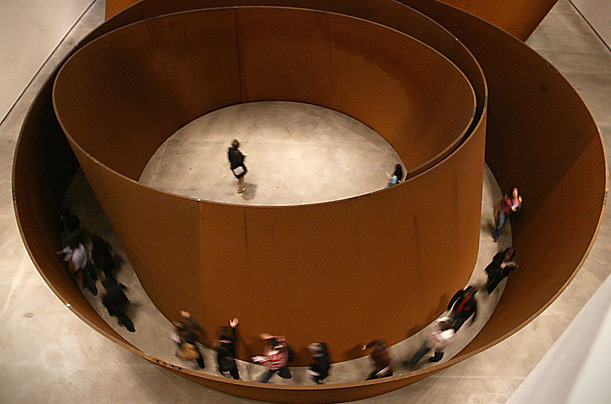 The Economist is long on Richard Serra: “slow-burning Mr Serra will be one of the artists whose work will continue to shine long after he is gone” [TheEconomist]
The defensive financial strategies art auction houses take during a market downturn [The Art Newspaper] and in related, financing for fine art is correspondingly receding [Portfolio]
A look inside the highly specialized art storage business [Financial Times]
The Tate Modern may have accidentally hung 2 Rothko’s sideways [TimesUK] 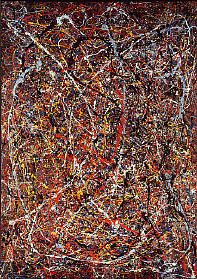 The Pollock in question via terisfind.com

The Bacchae: The Library Theatre, Manchester and on tour

The Independent (London, England) February 21, 1996 | JEFFREY WAINWRIGHT Euripides’ The Bacchae is strong meat, literally. Its dominant image is of dismemberment, animal and then human flesh seized alive and devoured in the furthest reach of frenzy available to human kind.

Now The Library is a nice place, a cosy cup of a theatre, designed less for Bacchanalia than for Spring and Port Wine. Other venues on Kaboodle’s itinerary may suit Euripides better, but interesting as it is to contemplate the startlingly different contexts of ancient Greek and modern theatre, the production does not resolve this fundamental incongruity. For this, the less traditional the performance space the better.

But for all the rawness at its heart, The Bacchae is in no sense a “primitive” play. It is the story of the coming of the disreputable but potent Dionysus to Thebes, determined to prove his lineage as a son of Zeus and claim the honour due to a god. Though despised as a foreigner by the Theban king, Pentheus, Dionysus has captivated the women of Thebes, who, led by Pentheus’ own mother Agave, are now the Bacchae, living in liquid abandon beyond the city walls. Dionysus, himself ambiguously gendered, is lord and liberator of women, and the rapture he engenders transports them from their appointed place into ecstasy. The play’s main conflict is therefore between this liberation and the pursed rectitude of Pentheus.

It appears to be a clash of immutable elements, but Euripides’ psychological subtlety lies in the way Dionysus is able to evoke a prurient interest in the activities of the women in his enemy, and so seduce him from his fixed masculinity. Discovered in his spying, Pentheus is sundered by the Bacchae, his own mother claiming his head as a trophy. The second psychological switch is Agave’s rediscovery of her former mind as the frenzy abates and the contrary face of the Dionysian rapture becomes apparent. go to web site facial hair styles

Happily, the complexity that surrounds Pentheus is presented with nuanced care by Lee Beagley. Softly spoken, he has no crude, tyrannical bluster about him, and he is drawn into his fatal female garments in a gentle swirl of reluctance and surprised pleasure. Kaboodle’s other long-time actor, Paula Simms, takes two of the vitally important “messenger” roles, and her narration, especially the first account of the Bacchae at large, is clearly and characterfully done. This scene also provides the best visual moment, in which the company create a huge beast from a cow’s skull and a vast red curtain, then hunt it down.

Otherwise, Lee Beagley’s staging and Bruce Gallup’s design are disappointing by Kaboodle’s previous standards. The eclecticism of the costumes is unfocused, and a cumbersome piece of revolving stage machinery resembling a sawn- off caboose clutters the action. Eugene Salleh makes a puckish Taras Bulba of Dionysus, but his voice is not sufficiently commanding. Despite the ritual elements, these plays require a tremendous amount of simple, informative speaking, and, Beagley and Simms apart, this is woefully underpowered here. The result is that this great and disturbing play is not nearly disturbing enough.

n On tour to Marlborough, Birmingham, Kendal and Leicester this month, then throughout F} {DD} 21:02:96 {XX} Arts {PP} 8 {HH} Music: Music from the Yellow Shark, Frank Zappa / Ensemble Modern Royal Festival Hall, London {BB} Phil Johnson {TT} The late Frank was sadly unable to appear for this ultimate valediction of his role as a serious composer, but if he had, he would, you think, have taken comfort in the extent to which his facial hair-styles seemed to live on in many members of the audience. The yellow shark of the title lay pinned up behind the stage like a scruffy talisman and an air of expectation lay over the whole of the first, non-Zappa, half of the performance. web site facial hair styles

Opening with three studies by Conlon Nancarrow, the Ensemble demonstrated immediately their masterly grasp of difficult repertoire, the two pianos chattering away as if in binary code while the percussion sectionswapped roles in a see-saw of rhythmic accents, like chopsticks rattling on a plate. Study No 6 was achingly beautiful, the strains of a Mexican lullaby somehow emerging through the convulsive pitter-patter. Varese’s Deserts followed, accompanied by a film by the video artist Bill Viola of underwater point-of-view shots, barren landscapes and, eventually, an interior scene in which a man moved slowly across a room. Meanwhile, the music – part live orchestra, part taped industrial sounds – reached a series of crescendos, matched at the end by a magnificent coup de film, when the man and his furniture were dashed to smithereens. It was difficult, it was pretentious, but it was also very well done, and it matched the accumulating tension and ecstatic release of the music marvellously. So how would Frank live up to that?

Brilliantly, of course. First assembled for a performance at the 1992 Frankfurt Festival, which was partly conducted by the composer, the music is a compendium of Zappa themes that he got up to speed on his trusty synclavier and then printed out as music for the orchestra to learn, the title emerging only as an afterthought. Beginning with a cheesy Star Wars-ish introduction, the Ensemble’s programme mixed and matched movements from the original performance (available almost complete on the excellent Rykodisc album). Echoes of Boulez and Henze, at times rather too plinkety- plonk for comfort, were evident, but much of the music was quite superb, and the closing “G-Spot Tornado” was a tour de force of sustained action and invention. Only in “Bebop Tango,” was there any real Mothers of Invention monkey-business (when the orchestra talked among themselves, loudly) and the concert ended in total adulation. The encore, though, was a bit of a disappointment; hoping maybe for “Peaches En Regalia”, what we got was the Star Wars intro again. But the Zappa-philes went home happy, as they knew they would.

This entry was posted on Tuesday, November 11th, 2008 at 12:24 pm and is filed under Go See. You can follow any responses to this entry through the RSS 2.0 feed. You can leave a response, or trackback from your own site.

One Response to “Newslinks for Tuesday, November 11th, 2008”