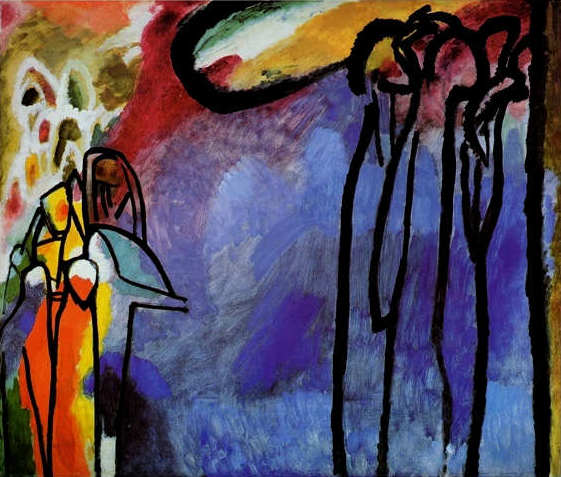 Improvisation 19 (1910) by Wassily Kandinsky, on display at Lenbachhaus, Munich, Germany

The Lenbachhaus in Munich drawing on support from the Centre Pompidou in Paris, and the Guggenheim Museum in New York which have pooled their collectively large collections of works by Wassily Kandinsky to mount a major retrospective of the oft-overlooked artist’s oeuvre, re-examining his influence on subsequent generations of artists and aesthetic schools.  The retrospective features a total of 95 works from all periods of Kandinsky’s five decade career, focusing on the major, large scale pieces that were instrumental in Kandinsky’s own evolution as an artist.  Kandinsky was a founding pioneer of Abstract Expressionism, through his works as well as his theoretical treatises and writings.   His methodical approach to conveying abstraction through color, line and form demonstrates a very sharp intellect that also has the ability to create accessible works of art, an ability which has been successfully replicated by very few abstract painters since his death in 1944.

Those unable to make it to Munich before the end of the exhibition will be able to view it April 8th to August 10th, 2009 at the Pompidou in Paris, and from September 18th to January 10th, 2009 at the Guggenheim in New York.  Each leg of the exhibit will emphasize works in that particular museum’s Kandinsky collection: the artist’s Blue Rider period is strongly represented at the Lenbachhaus, while the Pompidou will exhibit numerous pieces from his time in Weimar Germany (heavily influenced by the Bauhaus movement of the time). The Guggenheim’s collection, in turn, heavily features pieces from Kandinsky’s Parisian sojourn. The three museums, which individually have the three largest Kandinsky collections, have pooled their resources to create an retrospective of unprecedented scale. Pieces from private collections and other museums in Russia, Switzerland, the United States and other countries were also added to the pool, offering spectators a unique opportunity to view multiple seminal works of art in one viewing.

Museum Website: Lenbachhaus
Exhibition Page: Kandinsky: Absolute. Abstract.
Treatise by Artist: ‘Concerning the Spiritual in Art’
Kandinsky Gallery at the Guggenheim Musem
The overlooked great in the history of modern art: an artist who found new levels of meaning [GuardianUK] 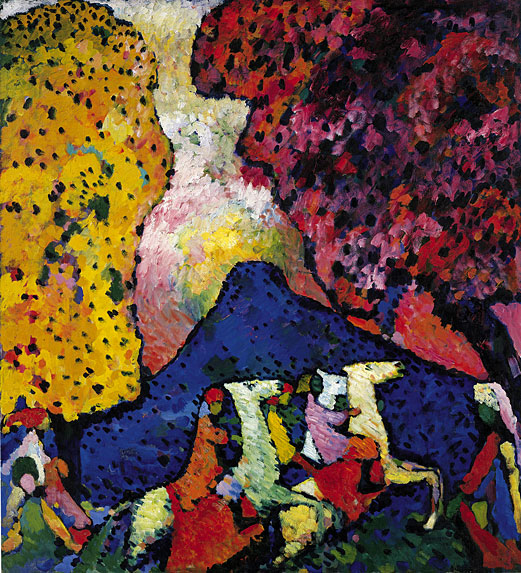 Kandinsky was born in Odessa and began his art career at age 30 after a successful first career as a lawyer, professor and economist in Russia. He spent his artistically formative years in Munich learning from several esteemed masters, and his talent developed quickly.  He divorced his wife and then moved to Paris, where he was a contemporary of Picasso, Matisse, Braque, Derain and other early 20th century painters who were at the front lines of the art’s avant garde. While the aforementioned artists are household names and frequently mentioned, Kandinsky is less often held up as a master, although his works appear pervasively through prints and his influence is undeniable. 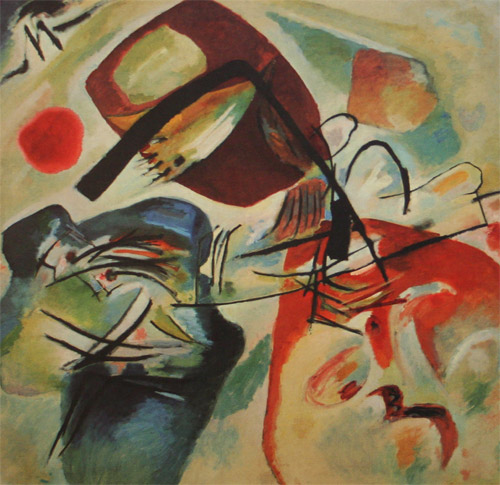 Picture with a Black Arch (1912) by Wassily Kandinsky, currently on display at the Lenbachhaus, Munich, Germany; on loan from the Centre Georges Pompidou, Paris, France

Kandinsky was also a noted art theorist, penning a seminal treatise on abstract art entitled ‘Concerning the Spiritual in Art.’   Published in 1911, Kandinsky compares the spiritual life of humanity to a large triangle, where the artist has the duty to constantly lead others to the top through his talent and works.  The apex of the triangle is composed of individuals who bring the sublime to other people.  During decadent or stagnant periods, souls fall to the bottom of the triangle and men seek external success and ignore purely spiritual forces.  The treatise also deals extensively with the nature, meaning and effect of color and form on the spectator, laying groundwork for a methodical approach to the creation of abstract art. 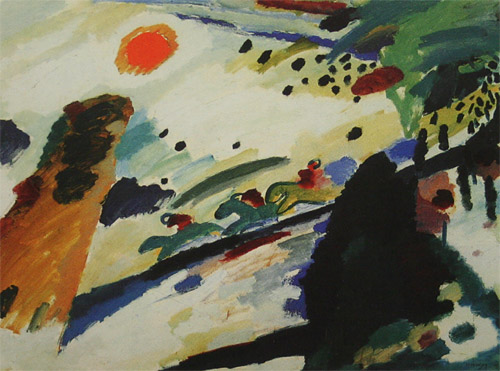 Romantic Landscape (1911) by Wassily Kandinsky, currently on display at the Lenbachhaus, Munich, Germany 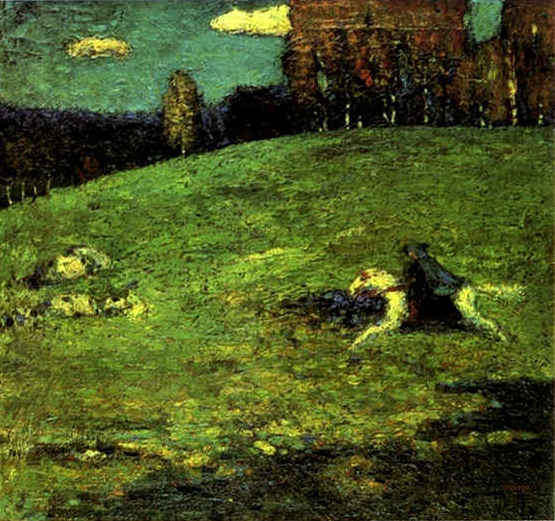 A Blue Rider (1903) by Wassily Kandinsky, currently on display at the Lenbachhaus, Munich, Germany; on loan from a private collection, Zurich, Switzerland 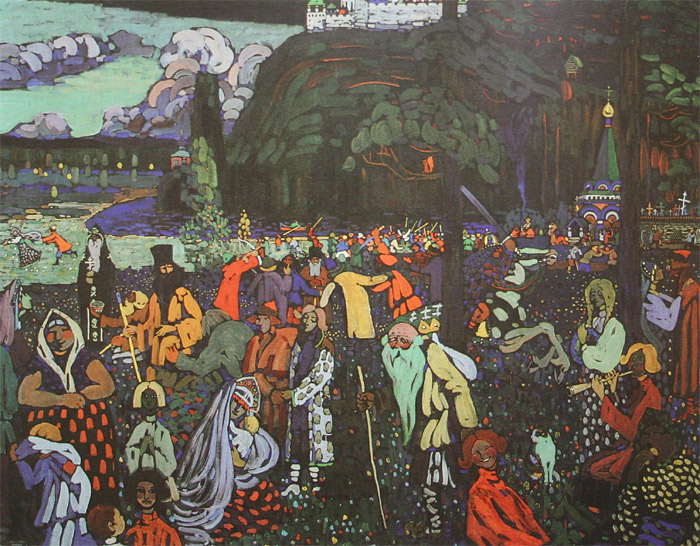 Colorful Life (1907) by Wassily Kandinsky, currently on display at the Lenbachhaus, Munich, Germany

This entry was posted on Friday, December 12th, 2008 at 5:53 pm and is filed under Art News. You can follow any responses to this entry through the RSS 2.0 feed. You can leave a response, or trackback from your own site.