Go See: Jonathan Meese 'Metabolism. No Zen in the the Bronxen, You Atomic Human Toy' at Galerie, Thaddaeus Ropac, Salzburg Through January 17, 2009 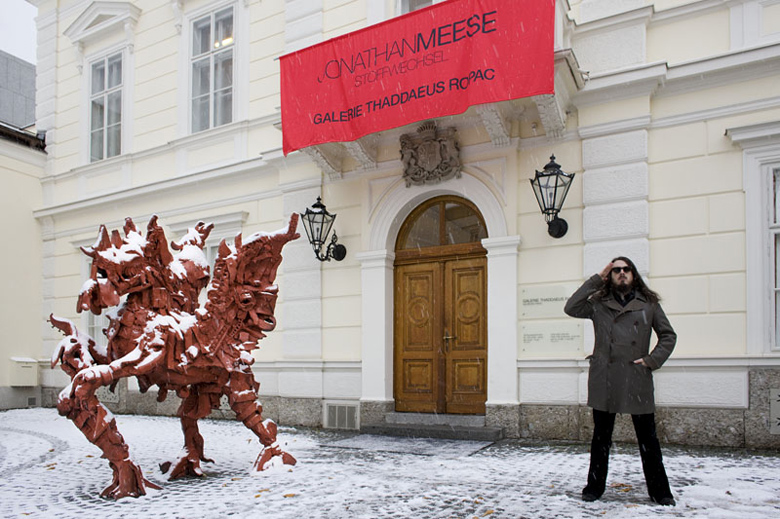 Now on display at Galerie Thaddaeus Ropac in Salzburg, Austria is German artist Jonathan Meese’s most recent sculptural works. Meese has been known in particular as a performance and installation artist but has recently renewed his artistic focus on the classic forms of painting, drawing, and sculpture. Though varied are his mediums Meese’s works are known to employ a constant theme of symbols, signs, and badges that serve as figurative allusions to characters in history, fictional literature, and current pop culture that are as varied as Stalin and Scarlet Johannson.  The artist’s work also serves as a reflection and reconstruction of German history and mythology.  This exploration has lent the artist to be compared to fellow German artist Anselm Kiefer whose work, especially that of the 1970’s, drew substantial inspiration from the history of Nazi Germany. 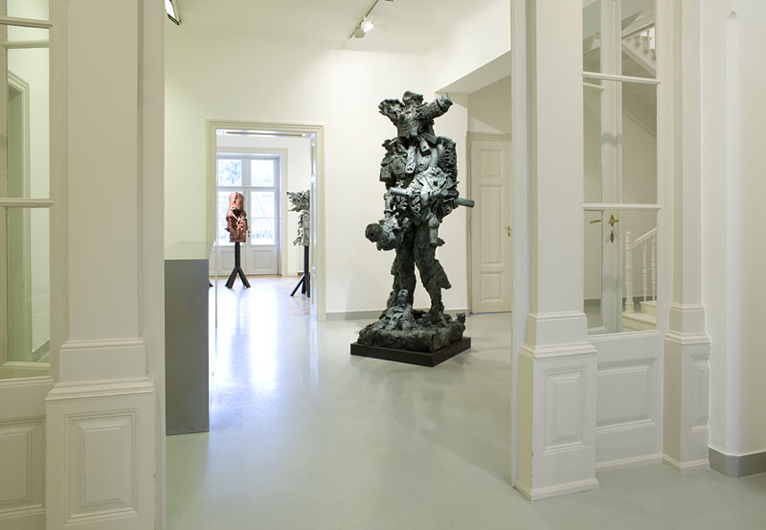 Installation view of a sculpture via Galerie Thaddaeus Ropac. 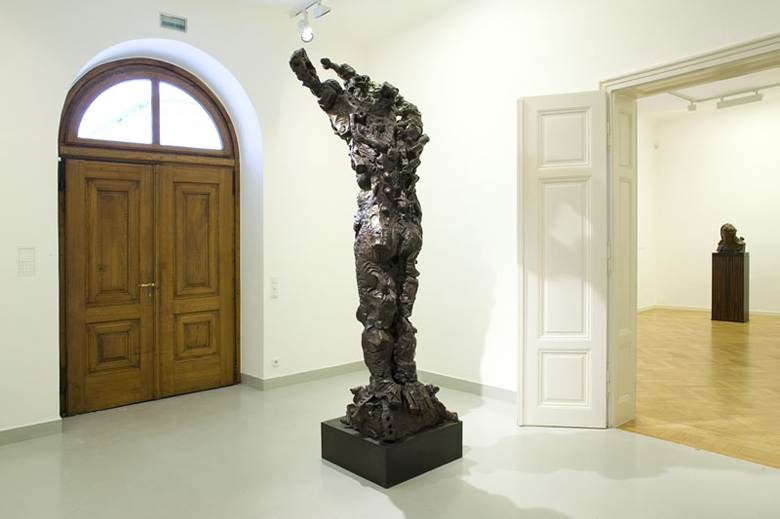 The Architectural Review May 1, 2011 | Anderton, Frances www.ciclavia.org I was recently asked for the buzz on Samitaur Tower, the latest project in Culver City by one-time avant-gardist, now head of SCI-Arc, architect Eric Owen Moss. The tower is an interesting building, I relayed, and will be even more striking when the promised information and art appears on its screens.

However, when it comes to buzz in Los Angeles, buildings such as the Samitaur Tower are not the centres of attention that they once were. This is in part because Moss’s latest work continues a formal language developed over a quarter century and does not offer fickle palettes novelty, and in part because purely formal experimentation is anyway viewed as suspect in these energy-conscious and recessionary times. But largely it is because many people concerned with the cityscape are currently not very interested in buildings at all. go to web site art in the streets

[ILLUSTRATION OMITTED] Last week, I joined about 130,000 people participating in a freewheeling bicycle passeggiata across 12km of streets winding through East Hollywood and Downtown to Boyle Heights in East Los Angeles. The event is called CicLAvia, and is based on the weekly ciclovia that originated in Bogota, Colombia. For Los Angeles, it marks a truly stunning adaptation of the car-centric streets of the concrete megalopolis, once described by Reyner Banham as ‘Autopia’ in his famous tract Los Angeles: The Architecture of Four Ecologies.

This week, I went to the opening of Art in the Streets, a new exhibition at The Museum of Contemporary Art in Los Angeles (MOCA). The show is a triumphal survey of 40-plus years of graffiti art, much of it originating in the streets of Los Angeles. Outside the museum was a phalanx of food trucks, selling high-end tacos, Korean barbecue and ‘Coolhaus’ ice-cream sandwiches in the popular, eye-catching trucks that serve as a mobile version of Robert Venturi’s Duck and Decorated Shed. Many of the people at the event came from condos and lofts in the newly minted residential districts of downtown Los Angeles (an area once dismissed with a brief note by Banham because, that is all, he said, it ‘deserves’). Some even arrived by one of the several new subway lines.

At the end of last year, I polled local design experts for their picks of the best thing to happen to the built environment in Los Angeles in 2010. Between them they selected CicLAvia, high-quality housing for the homeless in Downtown, and the burgeoning Expo Line, a subway line that will eventually connect Downtown to the west side of Los Angeles County. artinthestreetsnow.net art in the streets

The fact is that Los Angeles is undergoing a fascinating metamorphosis, ranging from an oddly characterful set of suburbs to an oddly utopian suburb, driven by growing density and mass transit. But in large part this is being led by people who are altering the region in spontaneous ways through biking, walking, street art, urban gardening, farmers markets and so on.

On a final note, Eric Owen Moss’s Samitaur Tower will soon enjoy a prime location in this altered Los Angeles, as it moves into sight from the soon-to-open Expo Line.

The Samitaur Tower is reviewed on pages 66-71.

This entry was posted on Tuesday, December 2nd, 2008 at 4:46 pm and is filed under Art News. You can follow any responses to this entry through the RSS 2.0 feed. You can leave a response, or trackback from your own site.

One Response to “Go See: Jonathan Meese 'Metabolism. No Zen in the the Bronxen, You Atomic Human Toy' at Galerie, Thaddaeus Ropac, Salzburg Through January 17, 2009”