Andrew Wyeth passes away at 91 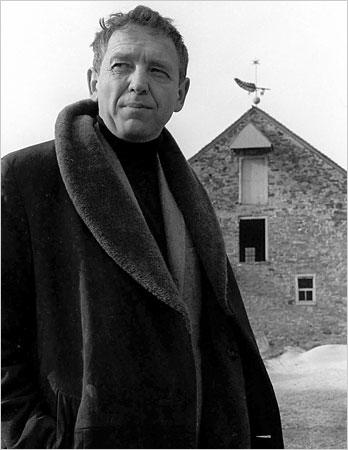 “Wyeth was an anti-modern painter … He did paintings that never changed, in a style that never changed. His image is one of stasis in a world that changed dramatically around him, and for my money that is a conservative position. It is in many ways a futile exercise, but he did it with great energy and conviction.”
— Robert Storr, Dean, Yale University School of Art, to the New York Times.

Andrew Wyeth, a key figure in 20th century American art and one of its most popular artists, died on Friday, January 16th, 2009 at the age of 91.  Wyeth’s oeuvre, which falls squarely within the realism genre of painting, has provoked both intense praise and intense criticism regarding the quality and content of his work.

His paintings centered around depictions of rural America, its landscapes and its people, and was often dismissed as formulaic, trite Americana. His works were infused with a sincerity that stood in marked contrast to the Modernist, Abstract Expressionist and Pop art movements that emerged during his career.  Nevertheless, the artist was always sought out among the general populace, with paintings such as Christina’s World becoming as familiar as Grant Wood’s American Gothic, becoming widely reproduced in prints. Wyeth was especially popular in Middle America for what many considered a steadfast, romantic patriotism and attachment to rural themes and subjects.

The artist stirred up controversy with his ‘Helga paintings’ series in 1986. These series was made up of 240 paintings featuring nude and clothed portraits and depictions of one of Wyeth’s female neighbors; his wife (and manager) Betsy claimed to have not known of their existence, and made several not-so-subtle insinuations of infidelity. The art world media made the story a sensation, and after the works went on display they were sold for $45 million to a Japanese industrialist. Later, the truth emerged: several of the paintings had been in the public eye for almost a decade. It is still not entirely clear whether the Wyeths fabricated the story to drive up the price of the art and promote the paintings, but allegations to that effect continue to this day.

Wyeth’s works are a part of most respected American museums’ collections, and hang in the Metropolitan Museum of Art, the Museum of Modern Art, the Whitney Museum of American Art, the National Gallery of Art and the Smithsonian American Art Museum, among many other notable institutions. He is survived by a wife and two children. 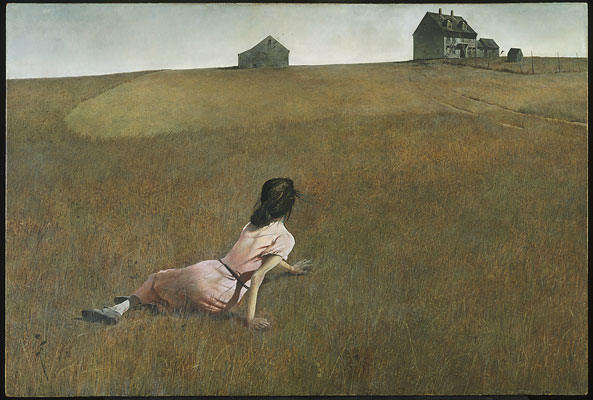 Christina’s World (1948) by Andrew Wyeth, via the New York Times 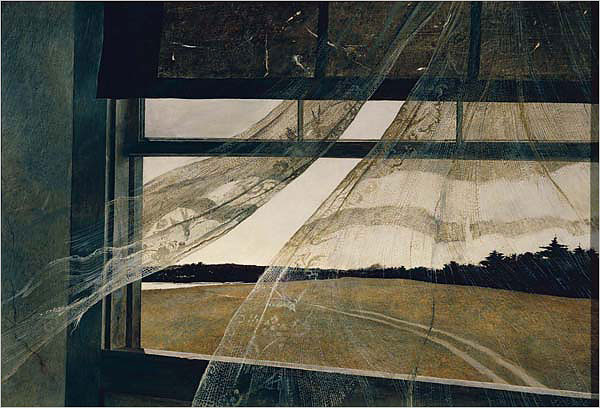 Wind from the Sea (1947) by Andrew Wyeth, via the New York Times 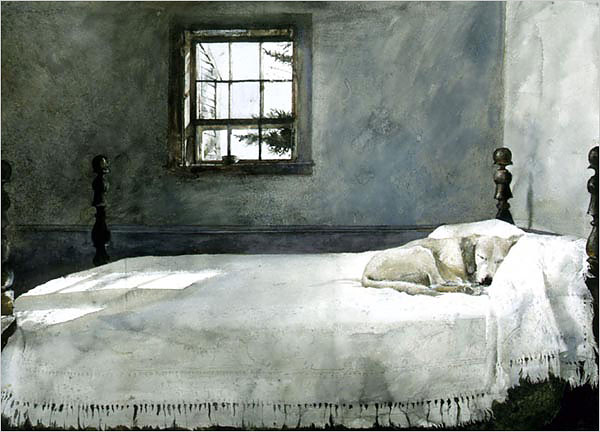 Master Bedroom (1965) by Andrew Wyeth, via the New York Times

“New York City provides free, first-rate job training and placement assistance, and we want every New Yorker that needs help to know about it, so we asked Spider-Man to help us spread the word,” said Mayor Bloomberg. “One of the reasons we created the Mayor’s Office of Media and Entertainment was to find new ways to connect with New Yorkers. Our partnership with Marvel and the Daily News is a fun and innovative way to let everyone know about the web of resources the City has to offer New Yorkers that need job assistance.” “Marvel’s proud to team-up with the City of New York to help inform all New Yorkers about the free services designed to assist them in finding employment. We couldn’t ask for two better leading men than Spider-Man and Mayor Bloomberg,” said Marvel Entertainment Editor-in-Chief Joe Quesada”Because even New York’s most famous Super Hero needs a day job!” “We are always looking for new ways to reach people in all forms of media about the job resources offered by the City,” said Katherine Oliver, Commissioner of the Mayor’s Office of Media and Entertainment. “Working with Marvel, the Daily News and Small Business Services on this special ‘Spider-Man: You’re Hired’ edition is a tremendous example of how the government can work with the private sector to really help people.” “Thank you to Mayor Bloomberg, Commissioner Oliver, the New York Daily News and the City’s great new partner, Marvel,” said Small Business Services Commissioner Walsh. “This is an exciting collaboration and a real super hero effort that will ensure that many more New Yorkers know about the City’s excellent free employment services. I’m glad that Peter Parker is helping us to spread the word to jobseekers that visiting a Workforce1 Career Center can help them get a job in this tough market.” “As New York’s Hometown Newspaper, the Daily News is proud to use our printed pages and the power of NYDailyNews.com to help New Yorkers, like unemployed Spider-Man alter-ego Peter Parker, find work,” said New York Daily News CEO Bill Holiber. “The City of New York and the Daily News have been tremendous partners on this and other projects – such as the “Hire Me” series that partnered with the “Job Hunt” show and caller helpline – by combining our resources to help New Yorkers get to work. In today’s Daily News, not only will New Yorkers find a special edition of the Spider-Man comic created by Marvel Entertainment, but we’ve also provided readers with a guide to the city’s services for job searches, training and research. We hope our efforts not only help one of New York’s most famous super heroes find work, but other ‘real’ New Yorkers, as well.” The recently created Mayor’s Office of Media and Entertainment is identifying and implementing new ways to let New Yorkers know about City resources available to them. To promote the City’s free workforce training and job placement services, the Office worked with Marvel Custom Solutions, a special division within Marvel Entertainment that develops innovative programs addressing the specific needs of partners and philanthropic interests, to create a special edition Spider-Man comic book featuring Mayor Bloomberg. in our site new york dailys

The full-color, eight-page comic features an out-of-work Peter Parker, frustrated and at a loss about how to find a new job. A serendipitous meeting with the Mayor helps to put him on the right track. The unique comic is available for free download online via iTunes through the popular Marvel Comics app (www.marvel.com/marvelcomicsapp). The New York Daily News is also printing a special edition of “Spider-Man: You’re Hired” at no cost to the City, appearing in over 600,000 papers with a list of all the Workforce 1 Centers in the City where the comic will be available.

The Department of Small Business Services oversees a system of nine Workforce1 Career Centers located throughout the five boroughs, which provide New York City jobseekers with a full array of free employment services, including job preparation, training and job placement in a professional setting. Since 2004, the Department of Small Business Services transformed a system that was placed New Yorkers in about 500 jobs a year into one that placed New Yorkers in more than 25,000 jobs in 2009. To find a Workforce1 Career Center and learn about services, New Yorkers can visit NYC.gov or call 311. go to website new york dailys

Two additional one-page comics have also been created in conjunction with this launch. In the first comic, Spider-Man can be seen at various well-known New York City attractions describing the great free job services that the City offers. Workforce1 Career Centers are located throughout the five boroughs and provide job seekers with a full array of employment services, including job placement, career counseling, professional development, and access to training opportunities. In the second comic, Spider-Man takes his friend Mary Jane to learn more about the “Made in NY” Production Assistant Training Program. Developed in partnership between the Mayor’s Office of Media and Entertainment and Brooklyn Workforce Innovations, this free program helps diverse New Yorkers gain access to entry level positions in the entertainment industry. The program is currently recruiting for applicants.

“Job Hunt” – produced by NYC Media, the official television, radio and online network of the City of New York and part of the Mayor’s Office of Media and Entertainment – offers expert advice about navigating the job market and features New Yorkers who have taken advantage of City resources. In each episode of “Job Hunt,” a panel of experts and recruiters shares tips on resume building, interview skills, and landing a new job. Episodes are available to watch online at NYC.gov on the NYC Media Video on Demand Player.

This entry was posted on Monday, January 19th, 2009 at 12:52 am and is filed under Art News. You can follow any responses to this entry through the RSS 2.0 feed. You can leave a response, or trackback from your own site.

One Response to “Andrew Wyeth passes away at 91”