For the Love of Copyright Law: ‘Red Rag to a Bull’ prods Damien Hirst over lawsuit 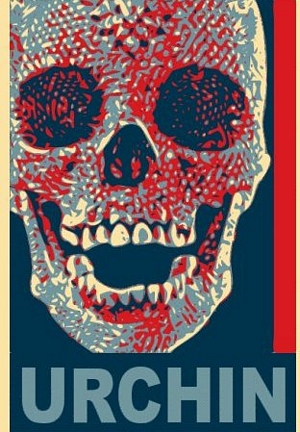 A work from Red Rag to a Bull from the website

When Damien Hirst sued a 16-year-old street artist over copyright infringement late last year, demanding the boy pay him £200 for profits made on collages that incorporated an image of Hirst’s diamond and platinum skull ‘For the Love of God,’ a bit of an uproar followed.  Hirst, who has made an estimated £500 million from sales of his art work, was seen as a bully, and moreover perhaps, as a hypocrite, given that Hirst himself has taken ideas from other artists, notably the claim by former Hirst friend and artist John LeKay, whose crystal-studded skulls done in the 90s bear resemblance to ‘For the Love of God.’

Enter Red Rag to a Bull, an artist collective including Jamie Reid, who made the cover for the Sex Pistol’s album ‘God Save the Queen,’ James Cauty, who, when in the band KLF, burned £1 million, and Tracey Emin’s former boyfriend Billy Childish. Through their website, the collective has launched a campaign to get back at Hirst by selling limited edition works that lampoon Hirst’s work and name, as well copyright laws. By buying these works, ‘you can now save this Street Urchin from certain death and help him get back the 200 quid that this Hirst allegedly nicked off him.’ 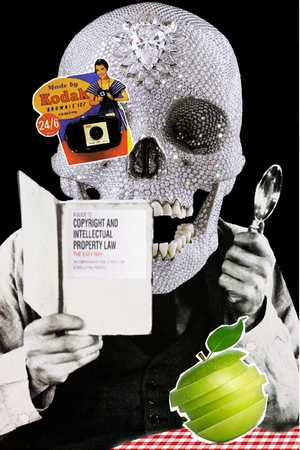 ‘For the Love of Disruptive Strategies and Utopian Visions in Contemporary Art and Culture No.2′ An exact copy of Cartrain’s collage, painstakingly recreated and improved by James Cauty from random pixels found on the interweb. via Red Rag to a Bull 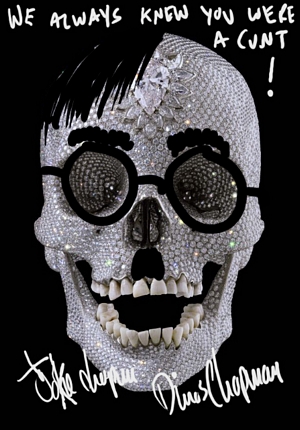 ‘For the Love of Disruptive Strategies and Utopian Visions in Contemporary Art and Culture No.9 – SOMETHING FROM THE BROTHERS’
An alleged contribution from Hirst’s fellow YBAs Jake and Dinos Chapman via Red Rag to a Bull

The collective points out that this is not a crusade against Hirst or his success, but rather ‘a creative exercise that mocked and exposed the idiocy an overbearing and thoughtless approach to copyright control that creates fear and censorship in the arts.’ Cauty also says that Hirst is free to appropriate his work ‘to create a more meaningful and critically acclaimed work.’ 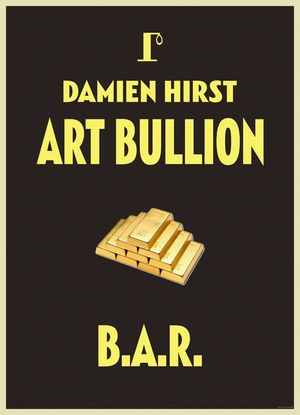 ‘For the Love of Disruptive Strategies and Utopian Visions in Contemporary Art and Culture No.6 – Part 1 – DAMIEN’S ART BULLION’
The British Art Resistance in association with L-13 and Red Rag To A Bull are very proud to announce the casting of this Limited Edition of 13 22ct Gold Bars in the name of art. Each slab ‘o’ gold will be 50 grammes in weight, assayed by the London Assay Office with the official hallmark of the British Art Resistance, feature the B.A.R. motto and motivs of skull and gallows, and will be individually hand stamped with the Trade Mark ‘Damien Hirst’ by a master craftswoman employed exclusively by the L-13 Light Industrial Workshop.
and ‘Part 2 – DAMIEN’S ART BULLION POSTER’
Can’t afford the gold? Buy the poster instead! via Red Rag to a Bull

This entry was posted on Wednesday, February 18th, 2009 at 1:46 am and is filed under Art News. You can follow any responses to this entry through the RSS 2.0 feed. You can leave a response, or trackback from your own site.

6 Responses to “For the Love of Copyright Law: ‘Red Rag to a Bull’ prods Damien Hirst over lawsuit”