Go See: GREED, A New Fragrance by Francesco Vezzoli at Gagosian Gallery in Rome through March 21, 2009 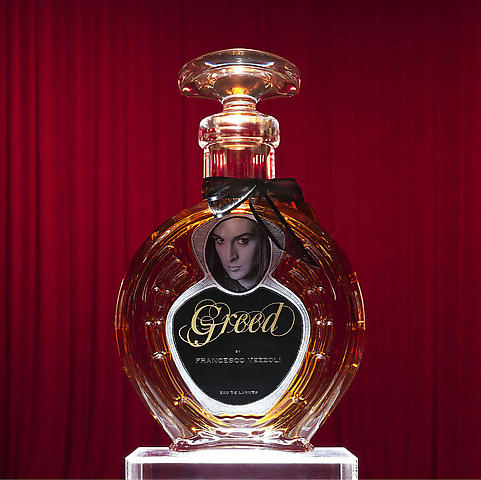 The opening night of Francesco Vezzoli’s ‘GREED’ at Gagosian Gallery in Rome on February 6th was a timely spectacle marking the end of an era of excess and decadence. Vezzoli is well known (and well criticized at times) for his use of celebrities in his work, and ‘Greed’ is no exception. The exhibition centers around a faux perfume, called Greed, and features a 60-second commercial directed by Roman Polanski and starring Natalie Portman and Michelle Williams, and a serious of needlework ‘endorsements’ by several female artists (and art world hangers-on) such as Georgia O’Keeffe and Leonor Fini.  At the opening, appearances were made by the elite of the art and fashion worlds, including Miuccia Prada and Dasha Zhukova. 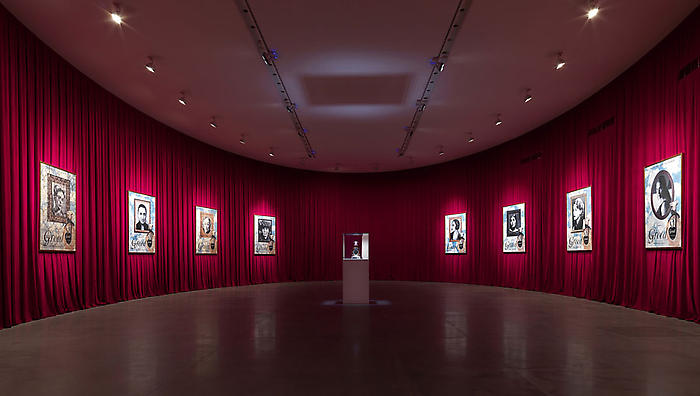 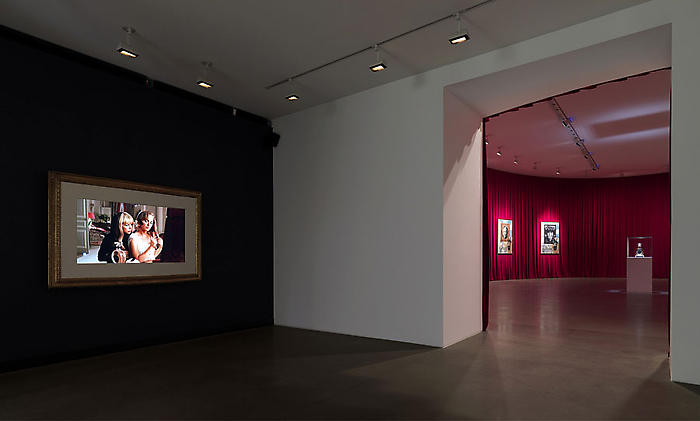 ‘Greed’ is a response to Marcel Duchamp’s ‘Belle Haleine: Eau de Voilette,’ a bottle of perfume upon which Duchamp replaced the label with one of his own making, including a photograph of him as his female alter ego, Rrose Sélavy, taken by Man Ray. The label on ‘Greed’ also features the artist in drag, photographed by Francesco Scavullo. But whereas Duchamp’s perfume bottle was a commercially available perfume, ‘Greed’ is a crystal bottle filled with colored water. When asked by David Grosz of Artinfo what greed smells like, Vezzoli answered, ‘Greed smells like nothing, but nothing smells like greed.’ He then elaborated, saying that after working with Polanski to make the commercial, ‘I thought that even if I worked on a perfume for three years with the best noses in the world I wouldn’t be able to find a perfume that defines the notion of a perfume as well as this perfume commercial defines the notion of a perfume commercial.’

Stills from Roman Polanski’s trailer for ‘Greed’ via Interview

Vezzoli often uses celebrities in his work, which his detractors see as superficial and sensational, indicative of the glamorization and commercialization of contemporary art. When Vezzoli staged a one-time performance of Pirandello’s ‘Right You Are (If You Think You Are)’ starring Cate Blanchett and Abagail Breslin, there was quite an uproar, particularly when most tickets to the Guggenheim show ostensibly open to the public actually went mostly to Gagosian patrons and celebrities. Other celebrity-heavy work includes ‘Democrazy,’ a fake campaign commercial starring Sharon Stone and Bernard-Henri Lévy, and a trailer for a remake of Gore Vidal’s Caligula – which was never made – starring Vidal, Hellen Mirren, and Courtney Love. Of the criticism that Vezzoli uses celebrities to become a celebrity himself, he has said, ‘many critics get stuck on the fact that I have celebrities in my work and conclude that since my work is about surface, it stays on the surface. So I have given up trying to claim a political aspect to my work. I leave it to others to judge.’ 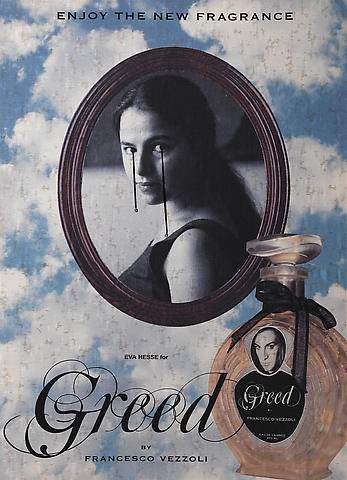 ‘Eva Hesse for GREED’ by Francesco Vezzoli via Gagosian

Though the perfume bottle may be at the center of the show, the piece as a whole is really an advertisement campaign, albeit tongue-in-cheek for a fake product. The needle-point portraits act as print ads that could be seen in Vogue or Vanity Fair. Vezzoli chose some of the women featured in them for shock value. Imagine Eva Hesse or Frida Kahlo endorsing a perfume. Others were more appropriate, like Fini, who designed the bottle for Schiaparelli’s perfume ‘Shocking.’ Polanski’s commercial, with its two young Hollywood stars, is clearly what drove so many visitors to the exhibition’s opening. Not the commercial itself, for that is easily available online, but the star power surrounding it.

This entry was posted on Thursday, February 19th, 2009 at 1:14 pm and is filed under Go See. You can follow any responses to this entry through the RSS 2.0 feed. You can leave a response, or trackback from your own site.

3 Responses to “Go See: GREED, A New Fragrance by Francesco Vezzoli at Gagosian Gallery in Rome through March 21, 2009”