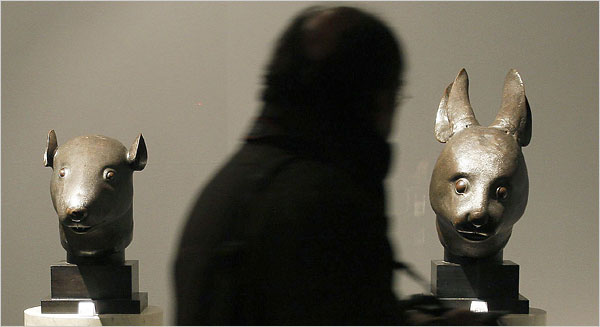 Bronze heads dating from China’s Qing dynasty, subject of a controversy after the winning bidder is refusing to pay for political reasons. Image via New York Times.

“I think any Chinese person would have stood up at that moment,” he said, adding, “I want to emphasize that the money won’t be paid.” – Cai Mingchao, via the New York Times.

Cai Mingchao, the winning bidder on two Chinese relics recently sold at Christie’s record-breaking Yves St Laurent auction, is refusing to pay for them in a gesture aimed at botching the sale of the figurine heads that were looted from an imperial palace almost 150 years ago. The winning bid was $18 million for each head.

The bronze heads representing a rat and a rabbit were the subject of some controversy before and during the auction.  A group based in China filed an injunction against Christie’s in a French court, in an unsuccessful effort to block the sale of the heads. They were part of a water clock display based on the Chinese zodiac, and allegedly looted by French and British soldiers during the Second Opium War in 1860. When asked about the sculptures during an interview at the onset of the auction, Pierre Berge commented that he would return them if  they would “observe human rights and give liberty to the Tibetan people and welcome the Dalai Lama.” 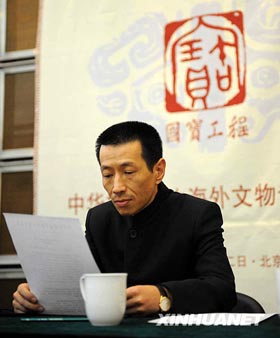 It would now seem as though China may have secured a win in this round.  Collectors are unlikely to step forward to buy such controversial pieces, especially since the Chinese government seems willing to get involved.  The heads have become a cause celebre in China.  Christie’s has very little recourse to sue Mr. Cai, as he is a Chinese citizen.  Some observers have said that Christie’s should have seen this coming; in their defense, the firm has said that it always performs bank and credit checks on buyers as part of the registration process. Mr. Cai paid a record $15 million for a bronze Buddha statue in 2006 and has been active in the Chinese art market, thereby eluding suspicion.

As for Pierre Berge’s comments on the subject, Yves St Laurent’s longtime personal and business partner remarked: “I’ll keep them at my place, we will continue to live together in my home.”

Xinhua, China’s official news service, reported today that Mr. Cai acted on his own behalf and not on behalf of the Chinese government. The report cites an unidentified official from the State Administration of Cultural Heritage, who said that Cai should answer for his own actions. However, questions of the Chinese government’s involvement still remain, since Cai made his announcement at a press conference backed by the Ministry of Culture, which outranks the State Administration of Culture.

This entry was posted on Tuesday, March 3rd, 2009 at 7:26 am and is filed under Art News. You can follow any responses to this entry through the RSS 2.0 feed. You can leave a response, or trackback from your own site.