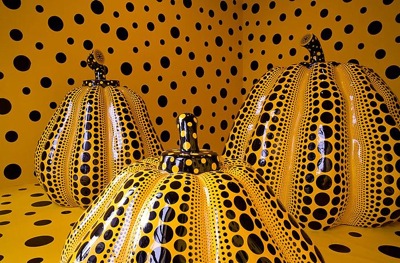 To celebrate Yayoi Kusama’s eightieth year, Gagosian’s Gallery is exhibiting some of her recent works at their West 24th Street location until June 27, 2009.  Although the show features only Kusama’s latest works, it can be considered as a retrospective: Kusama has been exploring the same themes and forms in her artistic production since the late 1950s, with her paintings, collages, sculptures and environmental works all sharing an obsession with repetition, pattern and accumulation.  Gagosian’s exhibit of Kusama’s work reveals how the production of this eccentric and elusive artist is not exactly Abstract-Expressionist, Minimalist, psychedelic or Pop, yet shares characteristics with all of these movements. 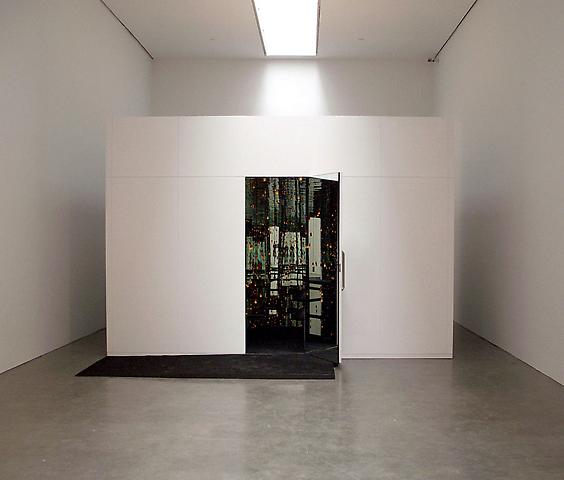 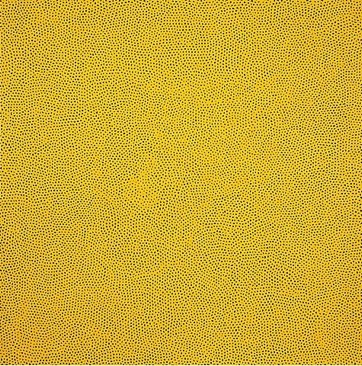 Kusama has been producing “Infinity Nets,” giant canvas paintings composed of innumerable small loops of paint applied on a monochrome background, since the late 1950s.  When her first New York exhibition opened in 1959, it was comprised of only five of these paintings, which were purchased by artists such as Frank Stella and Donald Judd.  These early Minimalists were among the first to appreciate Kusama’s work, whose all-over composition was reminiscent of Pollock while its calmness and delicacy was distinctly in opposition with Abstract Expressionism. 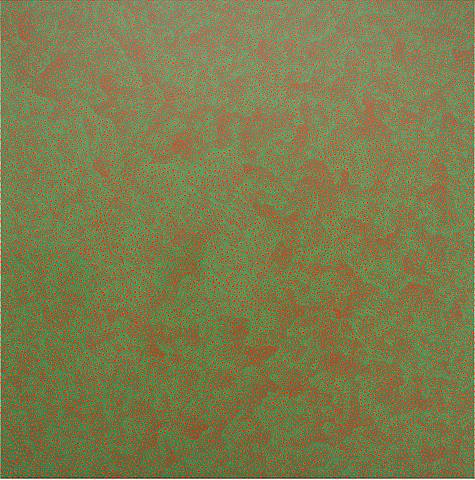 While the works on view were all made within the past two years, they are an extension of a series Kusama began in the ’60s, when she explored the concept of infinity as the palpable extension of the visions she claimed to be having.  Her work developed from a combination of childhood hallucinations and self-professed (and subsequently diagnosed) obsessive compulsive disorder, which caused her to return to Japan for psychiatric treatment in the early 1970s; she has been living in a psychiatric hospital in Tokyo since 1977. 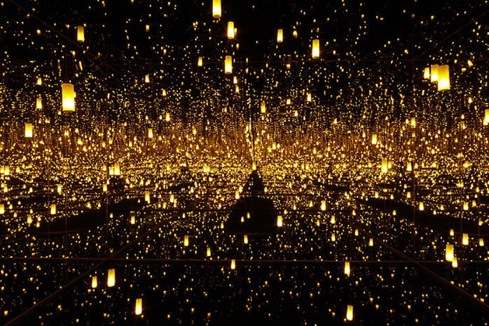 Yayoi Kusama, “Aftermath of Obliteration of Eternity” (2009) via Gagosian Gallery

The concept of infinity is more fully exploited in the highlight of this exhibit, “Aftermath of Obliteration of Eternity.”  Kusama has created a mirrored environment in which lights hanging down from the ceiling are reflected on each of the four walls and in a shallow pool of water on the ground.  The viewer stands on a platform in the center of the room as the lights go out then flicker back to life, creating a dazzling effect of direct and reflected light that completely surrounds the viewer on all sides.  More than any other work, this mirrored room allows the viewer to participate in Kusama’s obsession with infinity. 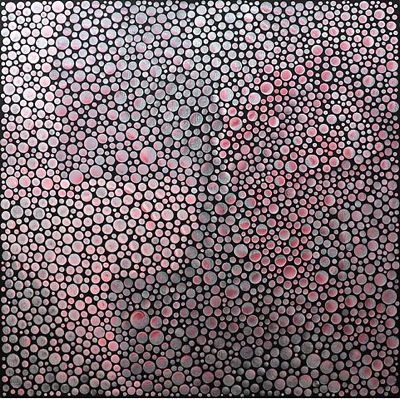 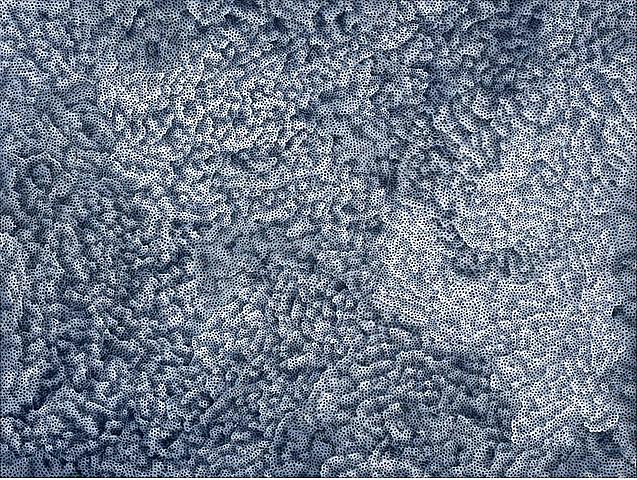 Kusama’s penchant for repetitive physical labor and obsessive bit-by-bit accumulation is apparent not only in the “Infinity Net” paintings.  In a front room painted orange and decorated with black polka dots, viewable only from the street, are three overblown pumpkins, a form which Kusama has adopted in her later works as a sort of alter-ego. 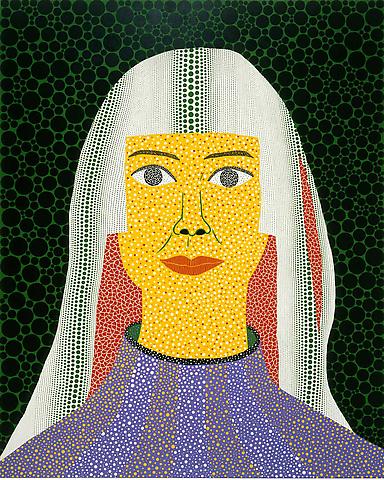 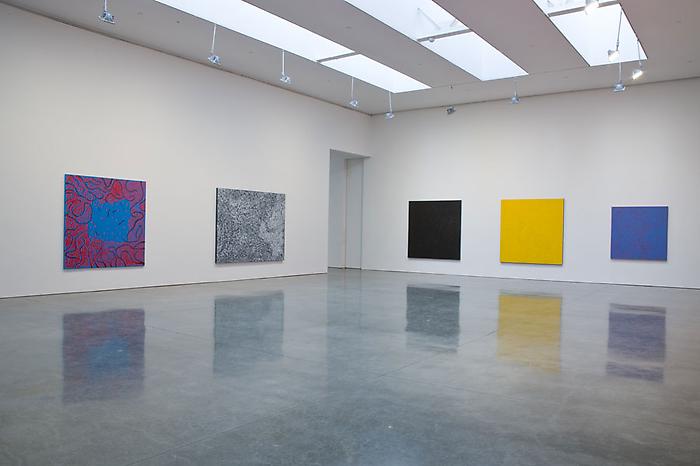 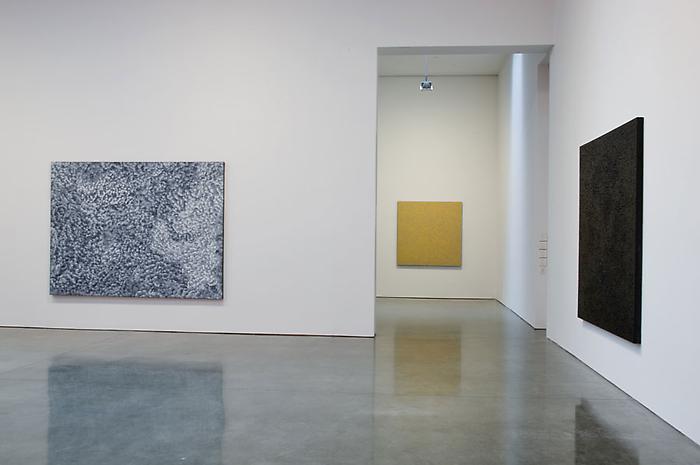 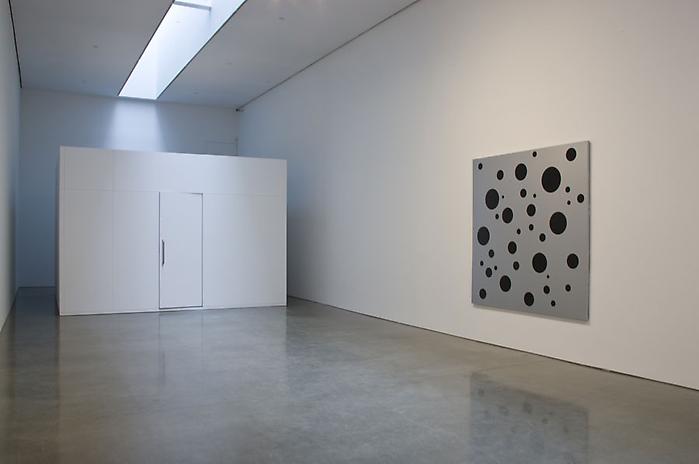 This entry was posted on Monday, June 15th, 2009 at 12:35 pm and is filed under Go See. You can follow any responses to this entry through the RSS 2.0 feed. Both comments and pings are currently closed.