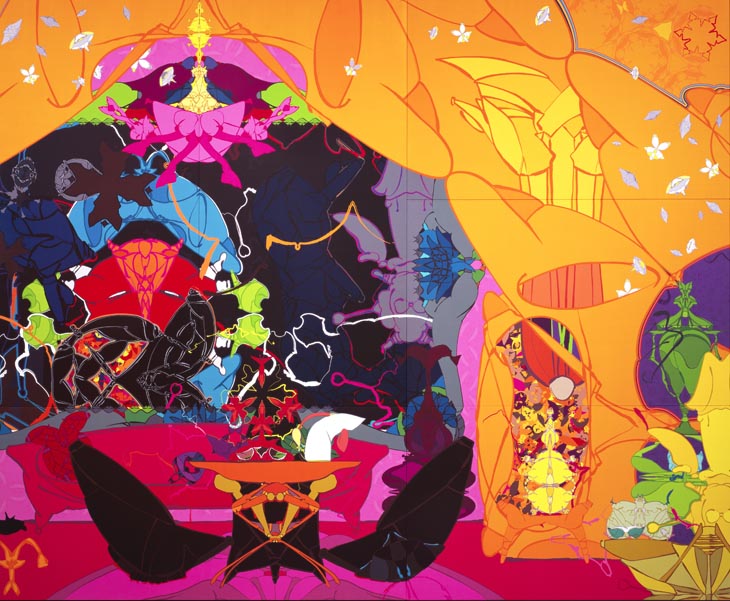 Currently on display at the Saatchi Gallery is “Abstract America: New Painting and Sculpture.” Saatchi presents the work of more than 30 artists, mostly from New York and Los Angeles many of which have never been previously shown in the United Kingdom. The exhibition highlights the ambition and breadth of new ideas being explored by American artists such as Francesco DiMattio and Gedi Sibony, Aaron Young and Agathe Snow from New York, Guerra de la Paz from Miami, and Mark Grotjahn and Sterling Ruby from Los Angeles. 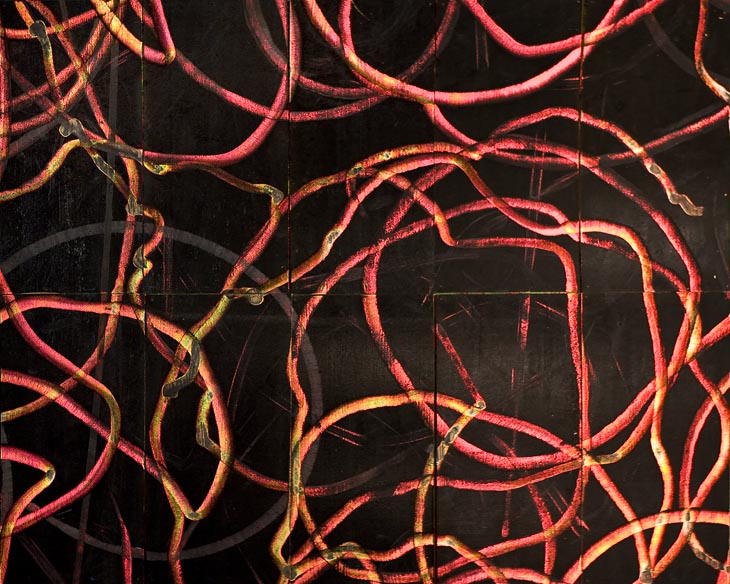 The artists exhibited aim to represent the new wave of American Abstraction. Their work shifts between cultural expression and the influence of new technology while recalling earlier traits of 1960s Abstract Expressionism. PTG.75 (White Pitcher) is a large-scale screen print on silk painting.  Created with a mix of rich pantone colors the work exudes an almost oriental style while the surreal and sheer weightlessness of the piece captures a virtual essence. 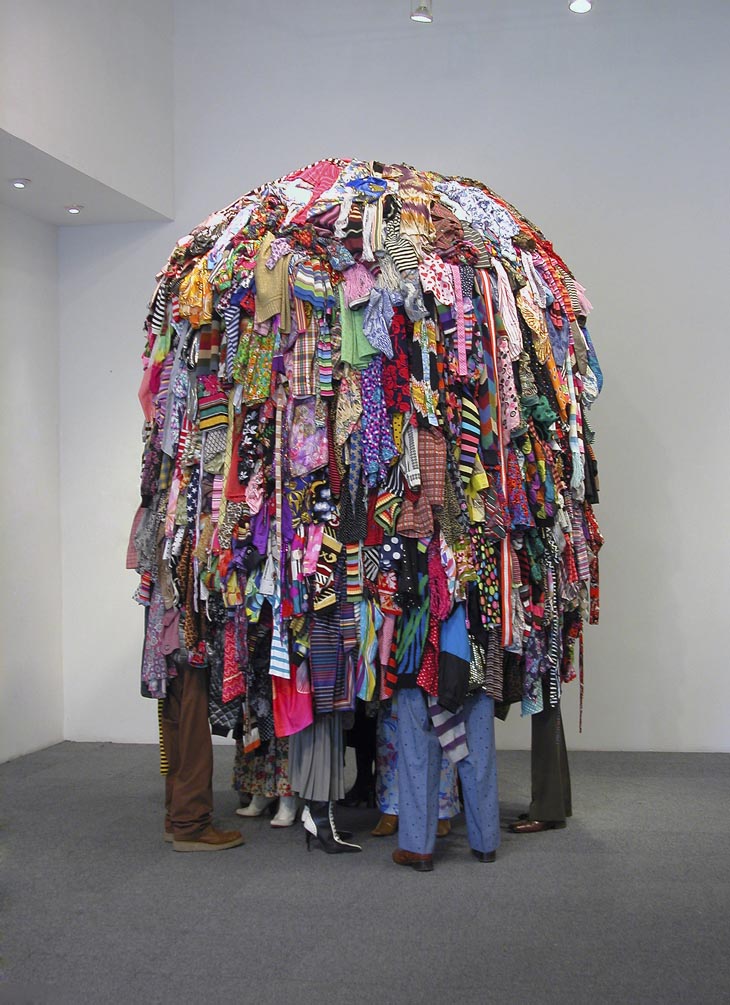 In Nine Cuban born American artists Alain Guerra and Neraldo de la Paz collaborate to create a giant mold of clothing incorporating many layers of used prom dresses, Christmas jumpers, and many now out-of-fashion combinations.  The feet of nine people are seen beneath supporting the massive heap. The work seems to attest to the weight of civilization and its disowned memories while emphasizing the strength of the community through its nine-man support.

Aaron Young’s Greeting Card 10a takes its title from a 1944 Jackson Pollock piece. The spontaneous gestures and swirls are associated with Pollock’s subconscious painting of the canvas yet the meaning is quite different: the imprints of burnouts from 12-high octane motorcycles. The piece was originally staged as a performance with plywood panels laid out to cover a 72 x 128 foot area of the floor covered with layers of yellow, pink, orange, red and a final coat of jet black before the bikers came to ride upon the surface for seven minutes which can be seen in a video by Art observed Here. The work was created in utter darkness with only the bike headlights to illuminate the action.  The final piece is made of six panels taken directly from the event. 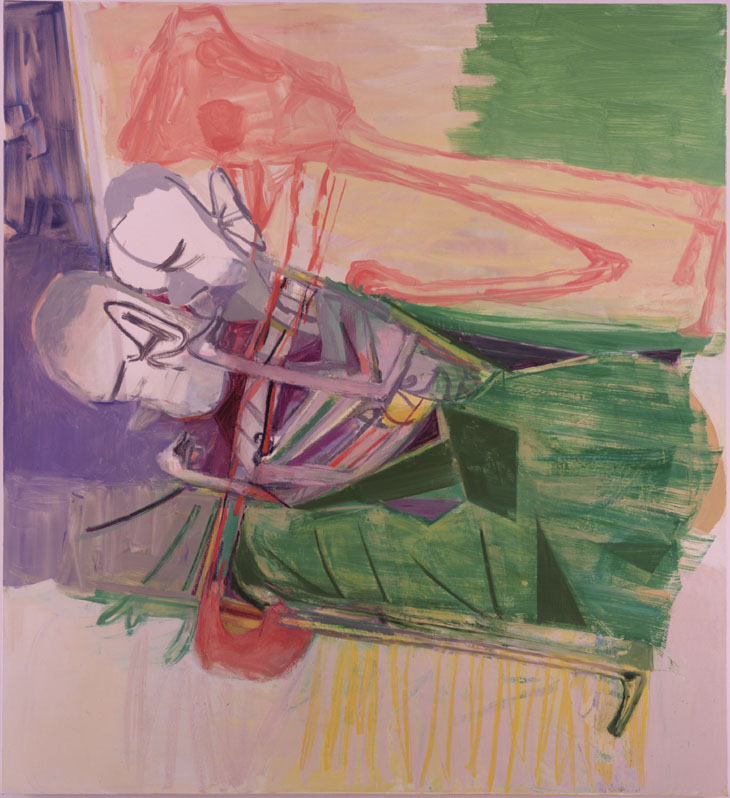 Amy Sillman’s Bed conveys both a narrative and a sense of psychological uncertainty.  The work is painted in pastel tones depicting the abstract frames of a room and two figures on a bed caught in tight embrace.  A third figure hovers above the couple making a scene that is at once speculative and intimate. 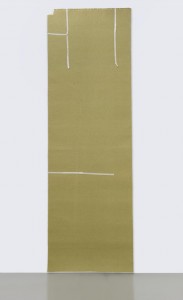 Gedi Sibony’s work recalls the traditions of minimalism yet without the polish and precision of works by artists such as Donald Judd or Ad Reinhart.  Sibony often incorporates found materials such as construction tape, wood, and plastic sheeting allowing him to concentrate on the poetic beauty found in everyday commonplace objects. 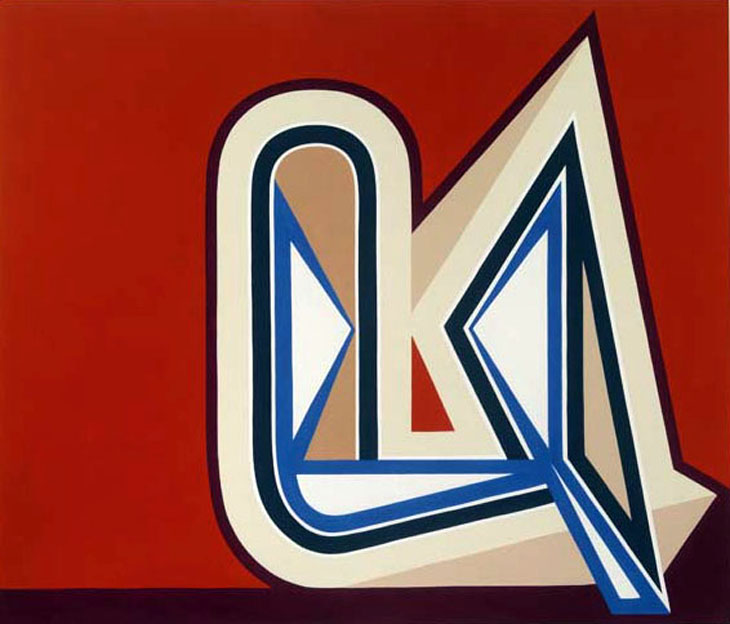 The New Face of Smiling (2005) by Bart Exposito, via Saatchi

This entry was posted on Friday, June 5th, 2009 at 7:24 am and is filed under Go See. You can follow any responses to this entry through the RSS 2.0 feed. You can leave a response, or trackback from your own site.