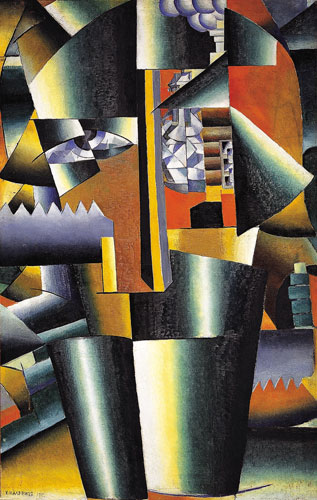 Portrait of Ivan Klioune (1913) by Kazimir Malevich, via The Guardian

Currently on view at Tate Modern is a ground-breaking exhibition celebrating the centenary of the Futurist Movement.  Launched in 1909 by the Italian poet Filippo Tommaso Marinetti with the publication of the Manifesto of Futurism on the front page of the Paris newspaper Le Figaro, the Futurist Movement borrowed elements from Cubism and Divisionism in order to create a new style that broke free from tradition and expressed the energy and dynamism of modern life.

The exhibition highlights the work of key Futurists such a Giacomo Balla, Umberto Boccioni and Gino Severini as well as works by other major artists such as Braque, Malevich and Duchamp. 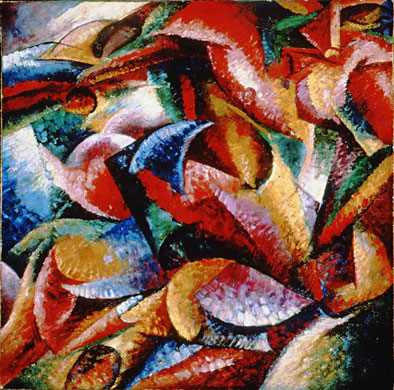 Dynamism of the Human Body (1913) by Umberto Boccioni, via The Guardian

A group of core artists including Carlo Carrà, Luigi Russolo, Giacomo Balla and Gino Severini made up the Futurist Movemen t. In their work they celebrated modern technology, speed and industrialism.  Often they depicted cars, trams and airplanes through the use of bold and energetic colors. 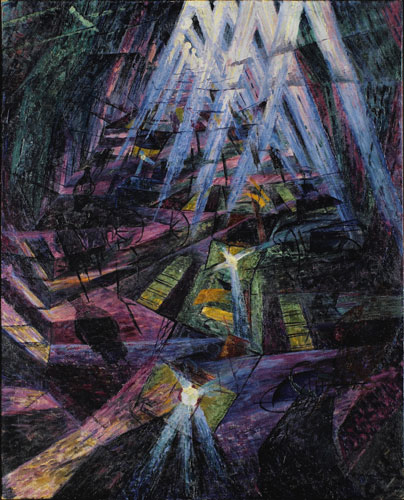 Forces of the Street (1913) by Umberto Boccioni,’ via The Guardian

The Tate brings together works from the original Futurist exhibition of 1912 that was held at the Galerie Bernheim in Paris and traveled to the Sackville Gallery in London and then throughout Europe.   The current display recalls the impact of the 1912 exhibit yet goes further with the examination of the relationship between Cubism and Futurism and how the two movements became linked. The exhibit also shows the influence of Futurism in Britiain and Russia and elements of the movement are found echoed in Vorticism and Russian Futurism. 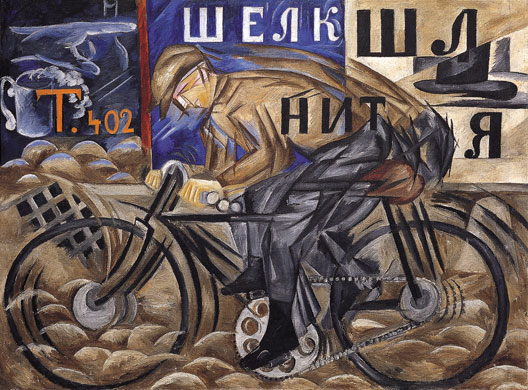 The Cyclist (1913) by Natalya Goncharova, via The Guardian

Highlights of the exhibition include Umberto Boccioni’s sculpture Unique Forms of Continuity in Space (1913), Carlo Carrà’s Funeral of the Anarchist, Galli (1911), Jacob Epstein’s Torso in Metal from the Rock Drill (1913-14) and Picasso’s Pipe, Glass, Bottle of Vieux Marc (1914) where he also pasted a copy of the Futurist periodical, Lacerba. 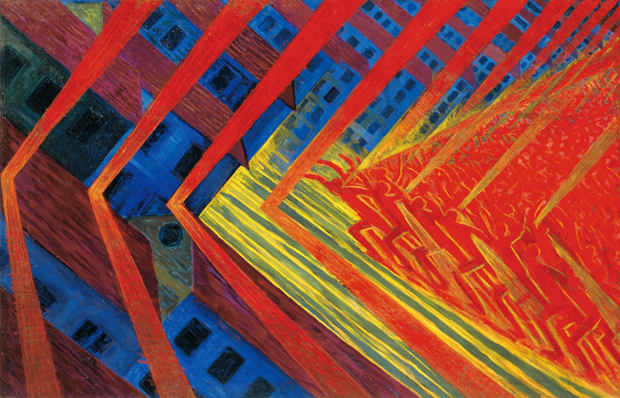 The Revolt (1911) by Luigi Russolo, via Tate Modern

‘Futurism’ is the first exhibition focused on Futurism to take place in Britain in 30 years. The show goes through September 20th. 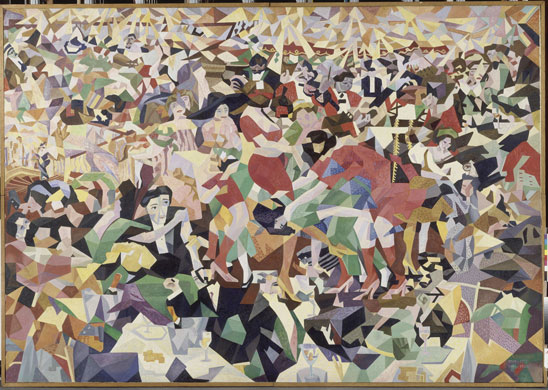 This entry was posted on Saturday, June 27th, 2009 at 12:38 pm and is filed under Go See. You can follow any responses to this entry through the RSS 2.0 feed. You can leave a response, or trackback from your own site.