The Philosophy of Andy Warhol (From A to B and Back Again)
(Andy Warhol, 1977)
Read More and Buy↠
Home » Go See – Paris: “Warhol’s Wide World,” A Retrospective On Andy Warhol at the Galeries Nationales du Grand Palais through July 13th, 2009

Andy Warhol, ‘Silver Liz,’ 1963.  Employing the mass-media technique of screen-printing, Warhol created 13 portraits of Elizabeth Taylor at the height of her fame. Via Corcoran.

Currently showing at the Galeries Nationales du Grand Palais is a selection from the thousand or so portraits that Andy Warhol painted in 1962 and onwards.  During that time, Warhol produced commissioned portraits of film and rock stars, fashion designers, artists, politicians and more obscure personalities using his signature technique–silkscreens, reproduced serially.  A pioneer of the Pop Art movement, his use of image repetition was seen as a commentary on the nature of consumer society and mass culture, and his focus on personalities contributed to a revival of portraiture at large. As the artist prophetically put, “All my portraits have to be the same size, so they’ll all fit together and make one big painting called Portraits of Society.  That’s a good idea, isn’t it? Maybe the Metropolitan Museum would want it someday.” 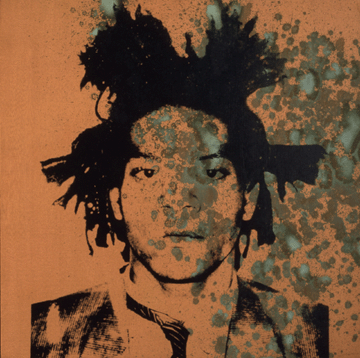 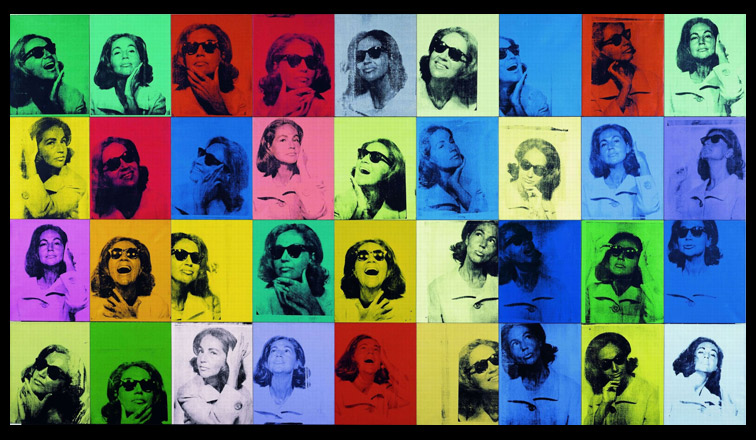 The exhibition, organized by the Reunion des Musees Nationaux, in collaboration with The Andy Warhol Museum in Pittsburgh, marks the first time that a French museum has exhibited Warhol’s work since his death in 1987. Curated by Alain Cueff, an art historian and professor at the University of Lille III, the show is specially designed to function as a retrospective; a re-examination of Warhol’s screen prints, polaroids and films which have never been shown all together before. “Warhol is so famous that we’ve become lazy, we don’t want to look closer at what he was doing,” said Cueff. “If we simply stick to the pop art label, his work will never be understood. Now, 21 years after his death, it’s time to look again at the contradictions of an artist who was often misunderstood. He said he wanted to come across as empty and superficial, yet beyond the immediate seduction of his work is a visual precision and a very demanding artist.”

Featuring other portraits of renowned figures including Mick Jagger, Mao Zedong, Edward Kennedy and Vladimir Lenin, the exhibition brings together an eclectic collection of personalities, designed to reflect Warhol’s image of an entire society; a “wide world.” 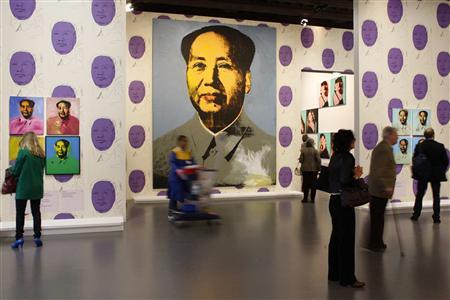 Inside the Grand Palais; an installation view of the Warhol retrospective. Via ChinaDaily 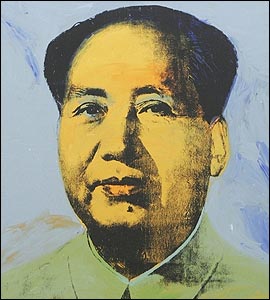 In 1972 Warhol produced 4  portraits of the Chinese Communist leader Mao Zedong, based on a photo on the cover of the Little Red Book. This print of  Mao, wearing pink lipstick, is on loan from a private collector in London for the exhibition. Via BBC. 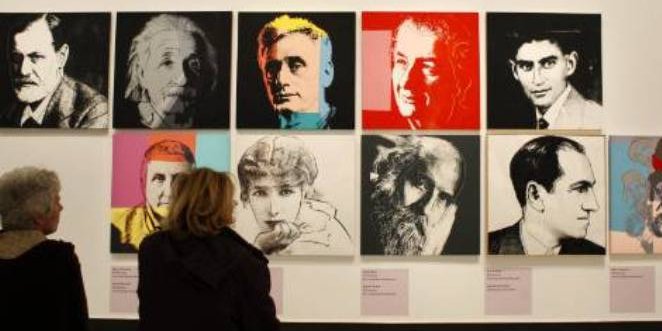 Visitors look at a selection of portraits by Warhol. The exhibition brings together roughly 150 pieces of the artists work.

Born in Pittsburgh, Pennsylvania in 1928, Warhol studied art at the Carnegie Institute of Technology before moving to New York City, where he worked as an illustrator and commercial artist in the 1950s. In 1960, Warhol began using the photo-silkscreen process to make pictures based on iconic American products and advertising images. During this time he founded his first studio, ‘The Factory,’ which became a meeting place and social hub for assistants, artists and musicians such as Lou Reed, Bob Dylan, Truman Capote and Mick Jagger. It was here in the studio where Warhol developed his systematic and repetitive process of photographing models with a ‘Big Shot’ Polaroid, selecting shots, then painting and silk–screening the portraits.

Inside “The Factory,” where Warhol developed his signature artistic process. Via CanadianArt. 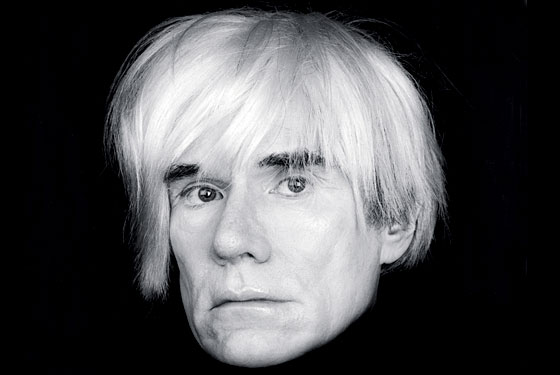 A portrait of Andy Warhol by Robert Mapplethorpe. 1986. Via NYMag.

The exhibition, which is sponsored by LVMH, is believed to serve as a kind of an ‘unprecedented archive‘ in the history of painting and photography. It will run until July, 13th 2009.

This entry was posted on Sunday, June 28th, 2009 at 9:48 pm and is filed under Go See. You can follow any responses to this entry through the RSS 2.0 feed. You can leave a response, or trackback from your own site.