Go See – London: Per Kirkeby at the Tate Modern through September 6th 2009

The Siege of Constantinople (1995) by Per Kerkeby, via The Guardian

Currently on view at the Tate Modern is the first major retrospective of the work of Danish artist Per Kirkeby (b. 1938). The show presents 146 works spanning four decades and bringing together his Pop-inspired paintings from the 1960s with early paintings on canvas and masonite from the late 1970s as well as a group of blackboard works, bronze sculptures, and rarely-seen works on paper as well as a selection of the artist’s writings.

Flight into Egypt (1996) by Per Kirkeby, via The Guardian

Kirkeby explores a variety of terrains including nature, art history, and popular culture and uses an almost scientific rigor when examining his subjects recalling his university training as a geologist.  Kirkeby gained international recognition in the early 1980s alongside what has been termed a ‘new’ European painting or Neo-Expressionism involving artists such as Georg Baselitz and A.R. Penck.  His paintings, like his sculptures, are gestural, vigorous and exude great expression. 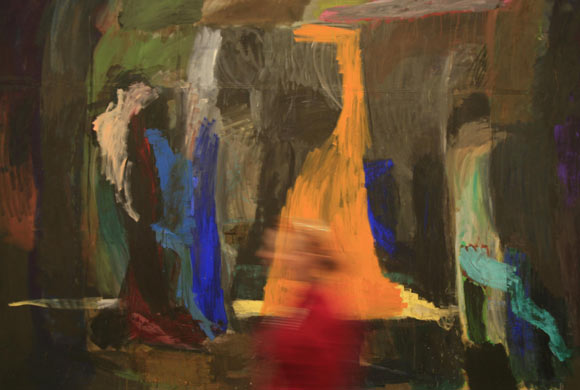 Untitled (1984) by Per Kirkeby via The Guardian

The exhibition begins with an exploration of a recurring motif in Kirkeby’s work: the hut.  As the most basic form of domestic architecture, it signals the importance of the natural world as the most continous source of inspiration for Kirkeby. The artist’s Pop-inspired paintings on masonite from the 1960s are another feature of the exhibition and have rarely been seen outside of his native Denmark. A room is also dedicated to the artist’s writing and reveals his reflections on his own art and that of other artists. 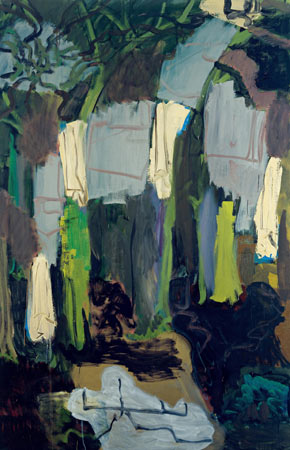 Wald-Variation II (1989) by Per Kirkeby, via The Guardian

Per Kirkeby was born in 1938. He completed a Masters degree in arctic geology at the University of Copenhagen in 1964 before becoming involved with Copenhagen’s radical Experimental Art School and international Fluxus. His artistic practice includes painting, drawing, work in various print-media, sculpture-both in bronze and brick and writing and film. Kirkeby’s works are represented in many public collections including Tate Modern in London; The Metropolitan Museum of Art, New York; the Museum of Modern Art, New York; and the Centre Pompidou in Paris. 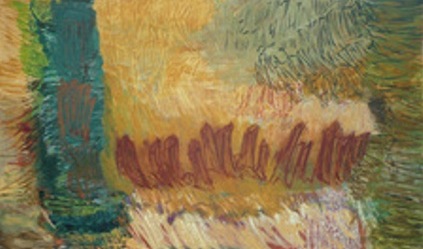 Portugalia (2008) by Per Kirkeby, via Art Knowledge News

Homegrown talent; Local artists to exhibit at Barnes and Noble

The Sun – Naperville (IL) February 1, 2004 | Kathy Millen Naperville artist Angela Graefenhein, left, teaches an after-school art club at Benet Academy on Thursday. Graefenhein is one of several artists from the Naperville Art League and North Central College who will display their work at the art league’s annual exhibit at Barnes and Noble in February. She will demonstrate landscape painting at the store today at 2 p.m.

If a picture is worth a thousand words, then it will be more than books speaking volumes at Barnes and Noble this month. The Naperville Art League will hold its third annual art exhibit at the bookstore in downtown Naperville throughout February. The show will feature the work of league members as well as art students from North Central College.

Nearly 100 pieces will be on display and for sale, including paintings, drawings, ceramics, pottery, sculpture, woodcuts and photography. The artwork will be exhibited on panels throughout the first and second floors of the store. Exhibiting artists will do demonstrations of their work Saturday and Sunday afternoons at the store.

“It’s so much fun to watch people watch the artists,” said Debbie Venezia, executive director of the art league. “I think it’s a wonderful way to give our artists exposure.” One of the artists they will watch is Angela Graefenhein of Naperville, who will do a demonstration of a landscape painting. Her presentation will be geared toward children.

Graefenhein’s art includes brightly colored contemporary pieces along with traditional still-life subjects. A member of the Naperville Art League for the past 13 years, she also teaches a children’s art class through the Naperville Park District, the Benet Academy Art Club and an art enrichment program at St. Raphael School. Her work also is available at the Anamart Gallery in Naperville and will be on display at the Edward Hospital from April through July. go to website barnes and noble coupon code

Two of her whimsical mixed-media paintings will be on display at Barnes and Noble. She said the exhibit offers people an opportunity to enjoy original works created by local artists.

“Our mission statement is to be aligned with literature, literacy, education and the arts,” Cortesi said. “Our customers just love it. It draws a lot of people in to view the art.” North Central College has been a part of the exhibit since its inception. Art students and faculty members will display several pieces including paintings, drawings, etchings and sculpture. Student participants are selected from junior and senior art majors.

Barry Skurkis, associate professor of art at North Central College, said participation in the exhibit instills a feeling of pride in the students while giving them a chance to better understand the business aspects of presenting their work to the public.

“It lets them know that art is not an individual effort but it’s also a community effort,” Skurkis said. “It’s very seldom you are not working with numerous individuals, whether it be curators or gallery owners. It is a group effort rather than sitting solo in your studio.” The Naperville Art League is a not-for-profit, volunteer organization sponsored by membership and dedicated to promoting and supporting the visual arts. The 43-year-old organization offers art instruction and education programs and encourages interest in all forms of creative art. Its largest annual exhibit, the Riverwalk Fine Art Fair, is held in September.

The Naperville Art League also holds themed member exhibitions at its Naperville Fine Art Center and Gallery, 508 N. Center St. The current exhibit, “When the Snow Bird Sings,” is on display through Feb. 12. Gallery hours are from noon to 4 p.m. Wednesdays through Fridays and from 10 a.m. to 4 p.m. Saturdays. site barnes and noble coupon code

The next exhibit, “Red,” will run from Feb. 14 through March.

Venezia said the art leagues many exhibits and events are gradually awakening people to the wealth of quality art that is available right in their hometown.

“We are one of Naperville’s best little secrets,” Venezia said. “We want to change that.” FYI The following members of the Naperville Art League will be doing demonstrations of their work from 2 to 4 p.m. weekends, through the month of February, at Barnes and Noble, 246 S. Washington St.:

This entry was posted on Friday, July 17th, 2009 at 10:39 am and is filed under Go See. You can follow any responses to this entry through the RSS 2.0 feed. You can leave a response, or trackback from your own site.