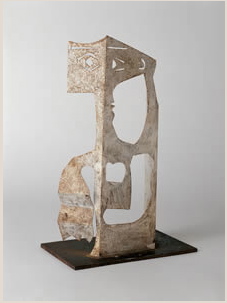 Pablo Picasso’s Mujer (Woman) (1961), the focus of the new show at Museo Picasso.

The current exhibition at Museo Picasso features forty works by its namesake, alongside three Julio González sculptures and a découpage by Henri Matisse.  The show’s highlight is Picasso’s Woman, drawn from Christine Ruiz-Picasso’s collection.  The sheet-metal sculpture is presented together with Picasso’s early paper cut-outs, Cubist art, and the paintings and sculptures that characterize the artist’s later years.

Curated by Elizabeth Cowling, professor of History of Art at Edinburgh University, the show highlights Picasso’s artistic evolution.  Given its inclusion of pieces from different periods in Picasso’s life, the show follows Picasso as he “take[s] these little pieces of paper scattered all around and turn[s] them into a medium that will last.” Woman is itself based on an earlier cut-out, and constructed of three folded panels painted white.  It is the central work of an exhibition that places Picasso’s paintings alongside his sculptures, that seeks to showcase the unity of technique that brought the artist from cut-out to cubism, to the found materials that would comprise many of his sculptures. 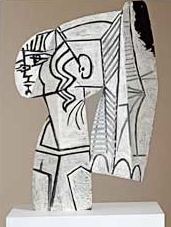 Pablo Picasso’s 1954 sculpture Sylvette, the model for which, Sylvette David, was the subject of many Picasso sculptures and paintings. Via FT. 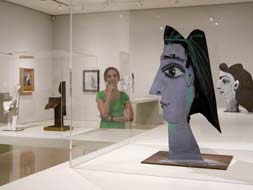 Above and below, a view of the Picasso exhibition at Museo Picasso. Via Surinenglish. 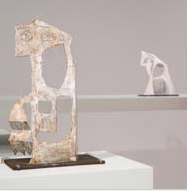 The exhibition will run together with a complementary collection of photographs at the museum, one of six in Spain dedicated to Picasso.  After 1964, Picasso stopped working in sculpture, though sculptor Carl Nesjar recreated many of his works on a larger scale.  The photographs illustrate this collaboration. 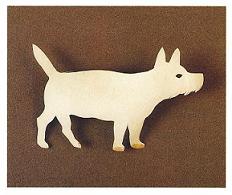 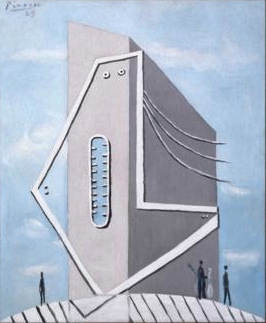 Born in Málaga, Picasso studied art in Madrid and Paris where he was a friend of Gertrude Stein’s.  In 1907 he began to receive financial and artistic support from an art gallery in Paris owned by Daniel-Henry Kahnweiler, who was also a patron of Fernand Léger.  Later, during the Nazi occupation, he was prevented from showing his art, though by this time he was a celebrity in the art world, maintaining that reputation until his death in 1973.

This entry was posted on Wednesday, August 5th, 2009 at 5:00 pm and is filed under Go See. You can follow any responses to this entry through the RSS 2.0 feed. You can leave a response, or trackback from your own site.