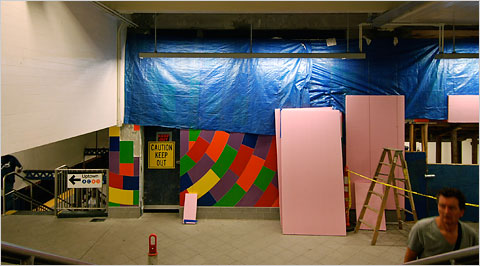 A glimpse of the Sol LeWitt mural, ‘Swirls and Whirls,’ being constructed in the Columbus Circle subway station, via NY Times

A mural designed for the Columbus Circle subway station in New York by Sol LeWitt in 2007, just before his death, is nearly complete [NY Times]

In related, Turner Prize winner Richard Long designs the cover for the London Tube Map [FAD]
The Thyssen-Bornemisza Museum in Madrid has seen visitor numbers quadruple since the opening of its Henri Matisse exhibit
[Art Daily]
Following the success of earlier Beyond Limits exhibitions, Sotheby’s announces its fourth contemporary sculpture exhibit at Chatsworth including works by Henry Moore, Marc Quinn, Zhan Wang, among others [Auction Publicity] 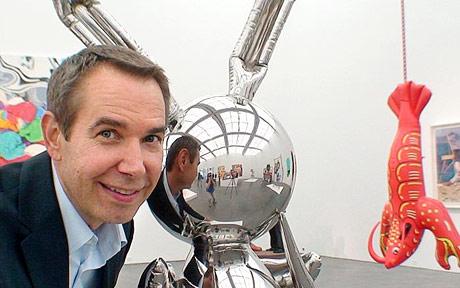 Jeff Koons via the Telegraph UK

Jeff Koons sits for lunch with the Financial Times and discusses his love of inflatables and how the custody battle for his son has affected his work [Financial Times]
MoMA’s PS1 in Queens will soon reprise its Greater New York exhibit, which will be its 3rd [LindsayPollack]
On Miuccia Prada and her still to be built €25 million, 20,500 square meter Prada Foundation in a south Milan industrial complex [ArtNewspaper]
Sotheby’s CEO William Ruprecht sells 5% of his equity holdings; he retains a 1% stake in the company [Barron’s via Art Market Monitor] 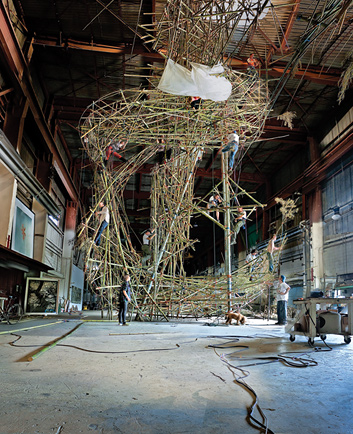 The Starns Brothers’ cover for the fifth anniversary of T Magazine, via NY Times 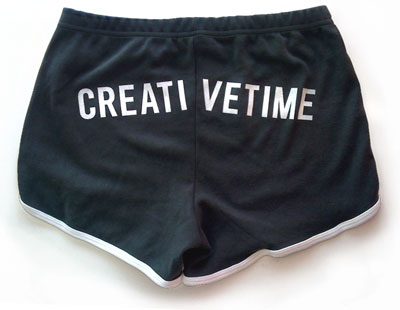 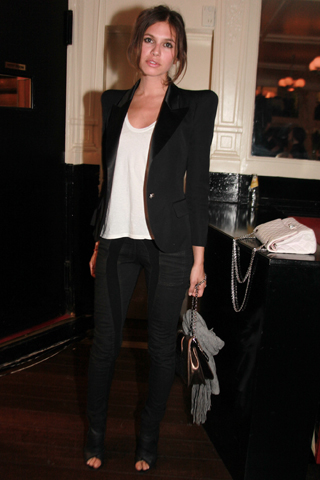 Dasha Zhukova, rumored pregnant with 2008 top collector Roman Abramovich’s child, as new editor of Pop magazine has a Damien Hirst work on the cover [NYMag]
Russian oligarchs invest enough money in the Constructivist and Suprematist art of the beginning of 20th century to provoke forgeries, more than half of items bought of these movements are reported to be inauthentic [The Independent]
In related, as Princeton Architectural Press claims to have discovered Frida Kahlo’s lost archive, scholars involved with the artist’s work refute the possibility of it being authentic [GuardianUK]
A new high intensity x-ray developed by Cornell University has already revealed a lost NC Wyeth illustration [ArtInfo] 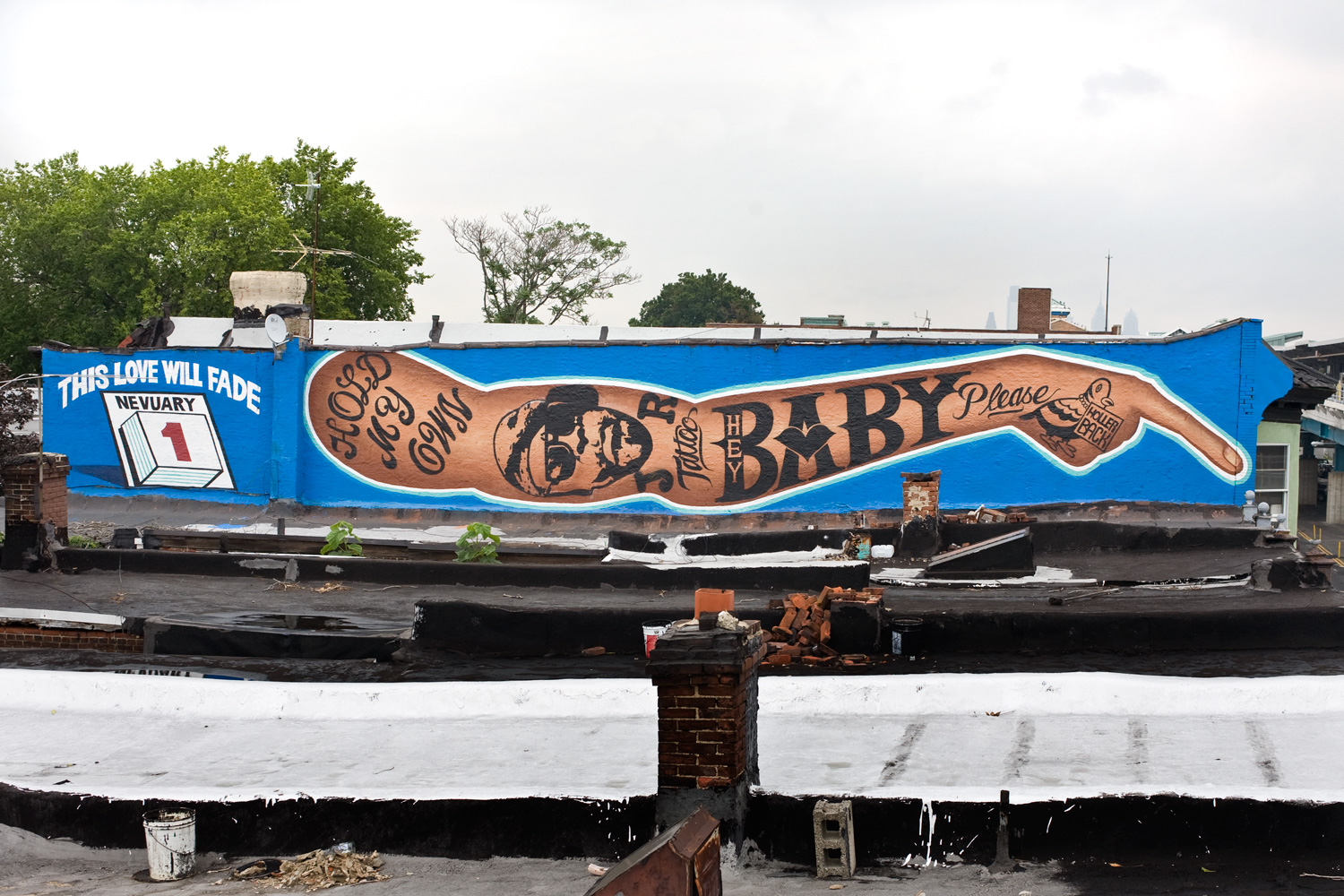 2007 Fulbright Scholar Stephen Powers, known as ESPO, is completing his Love Letter project, comprised of murals by multiple artists stretching across his home town of Philadelphia that can be seen from one train [A Love Letter For You]
Shepard Fairey calls his decision to graffiti-proof the brick walls of his studio personal preference and rebutts claims of hypocrisy [Street Level] and separately he is to unveil a large scale mural produced by the gallery Country Club at Art Basel Miami Beach [ArtDaily]
Are Museums crossing the line by granting curatorship to corporations? [The New York Times] 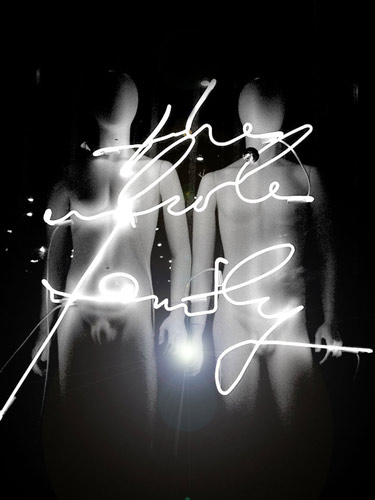 Terence Koh sends a very Terence Koh letter regarding his latest project with Opening Ceremony, a window installation [Hint]
On the relatively accessible yet potentially financially rewarding decision to invest in the works of MA students [The Guardian]
The Bortolami Gallery building is up for sale at $6.1 million by collector Adam Lindemann as Stefania Bortolami prepares to move to another location in Chelsea [Lindsay Pollack]
Matthew Barney and Bjork buy a four bedroom townhouse in Brooklyn Heights listed for $4.2 million [NYMag]

This entry was posted on Sunday, August 23rd, 2009 at 2:27 pm and is filed under Newslinks. You can follow any responses to this entry through the RSS 2.0 feed. You can leave a response, or trackback from your own site.