Minutes before the silent auction begin

Held in Sotheby’s New York on October 7th, 2009, the 18th Annual Take Home a Nude event manages yet again to attract not merely those who belong to the social circles of the art world, but also guests and celebrities who may not immediately connote that world. A wide variety of works and artists were represented at the event, and although some of the names, such as those of Jeff Koons and Eric Fischl could contribute to an environment of favoritism, there was pleasantly enough no hierarchy in the curatorship, neither of the event, nor the show.

Dustin Yellin, Anatomy No 2, presented as one of the works on “Take Home a Nude”, this piece is almost a 3 dimensional painting trapped in a rubber box

Two auctions were held during the Annual Art Auction Benefit, Take Home a Nude, both a silent and a live one. Honoring artist John Currin, the event featured works of contemporary artists including Eric Fischl, Jeff Koons, James Nares, Jenny Saville, Donald Sultan and attracted guests including Heather Graham, Padma Lakshmi and Liev Schreiber. The latter purchased Fischl’s painting for $52,000 making it one of the highlights of the auction.

Jeff Koons, Puppy As seen in the new Gagosian Gallery in New York, the limited edition Jeff Koons piece was one of the first works upon the entrance to the event space 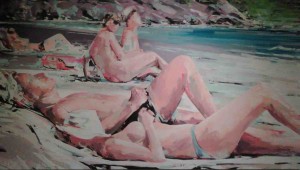 Michael Kagan, Until the End of The World- Take #2

This entry was posted on Monday, October 12th, 2009 at 7:07 pm and is filed under AO On Site. You can follow any responses to this entry through the RSS 2.0 feed. You can leave a response, or trackback from your own site.