AO On Site – New York: Cyprien Gaillard and Koudlam’s “Desniansky Raion” at The Kitchen, November 20th, as part of Performa 09

On November 20th, ArtObserved attended a Performa event that was unlike many others. The evening started out engulfed in the crowd of stylish audiences, which noisily filled the small entrance lobby and occasionally poured out onto the sidewalk for a smoke or some air. As many languages resonated across miniature gallery, anticipation seemed to rise to a crecendo. Needless to say, The Kitchen filled to capacity.

The artist, a young French native who is now based in Berlin, shuffled in and out of the performance space beyond the large black doors. Hurried, yet composed, he let escape an occasional smile to the public.

A portrait of Cyprien Gaillard in Berlin via Interview

A collaborative piece between Gaillard and a musical artist Koudlam, set The Kitchen’s performance space into a trance-like spectacle of abysmal destruction and human caused deconstruction captured on video and accompanied by a electro-tribal music and song. The audience found itself viewing saturated images moving through destruction across the screen in a somewhat tantric ritual.

Cyprien Gaillard is fascinated with ruin and undoing, and especially with the process of a certain wreckage. “I am interested in things failing, in the beauty of failure, and the fall in general,” he states to Interview magazine earlier this year. As a mixed-media artist, Gaillard explores the themes of the romantic notion of vandalism, human destruction, the gestural in contrast with stoic sculpture and architecture. 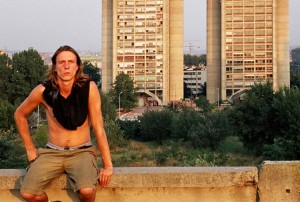 The artist against the cityscape of one of his video, Desniansky Raion via La MJC

One series of his work, know as Real Remnants of Fictive Wars began as a collective prank when Gaillard along with a group of friends used industrial fire extinguishers to set off smoke in desolate or momentarily abandoned parks in Paris. Capturing the effects on film, Gaillard eventually phased out the presence of human figures in his work and instead devoted attention to the abstract impact of smoke on landscape and environment. The resulting series of 6 35mm films have become a magical reference to Land Art and the impact of human action and decision on continuously re-shaping the natural landscape. This simple gesture, however, only evokes destruction, creating a cloud that manifests an abstract white mass to penetrate and disturb ancient and modern architecture. He even set off smoke to Robert Smithson’s monumental Spiral Jetty, an earthwork that hold an iconic quality. With Smithson, Gaillard shares the view that time moves towards chaos, but calls his own work “post-entropic – in pursuit of the big moment after the chaos.”

Cyprien Gaillard views the contemporary architecture present in his video-landscapes as a modern ruin bound to be overtaken by nature, so it this struggle between natural and man-made forces that he often observes, activates and documents. Such in the video titled “Desniansky Raion,” we observe a fantastic and dubious gang battle between two groups of men. Seemingly organized, and yet absolutely detached from any context, the image is revolting and yet captivating in its awe-inspiring grandeur (the music plays a crucial role here in intensifying the effect), one is psychologically paralyzed by its anarchic display of social annihilation. The battle, if one might call it that, is set against the backdrop of post-Soviet project architecture that for all of its utopian promises turned Russian suburbs into a dismal emblem of degeneration. Here Gaillard most effectively appropriates Denis Diderot’s observation that “one must ruin a palace to make it an object of interest” and what a spectacular performance it becomes.

Don’t miss Koudlam’s symphonic performance at OHWOW on December 2nd, as part of Miami Art Basel Opening Night celebrations.  The performance will be accompanied by a screening of Cyprien Gaillard’s Crazy Horse.

This entry was posted on Sunday, November 29th, 2009 at 7:22 pm and is filed under AO On Site. You can follow any responses to this entry through the RSS 2.0 feed. You can leave a response, or trackback from your own site.