On November 19th and 20th, Asia Society hosted one of 9 individual artists commissioned to conceive a piece of interactive art specifically for the 3nd Performa Biennial that has been remastering the landscape of New York art scene for the last two weeks. Yeondoo Jung’s Cinemagician is a project of one of the most prominent Korean artists working today. Combining theater, cinema, and performance, Jung create a trompe d’oeil effect that is both highly innovative and amusing. He tackles the often overlooked process behind creating a video work, art form that increasingly pervades modern practice. By allowing the audiences to witness first hand the making of Jung’s video work, he activates the space between the artist and the public. Jung recognizes the importance of the creative process to the final product and thus implicates the audience in actively participating in creating the work. 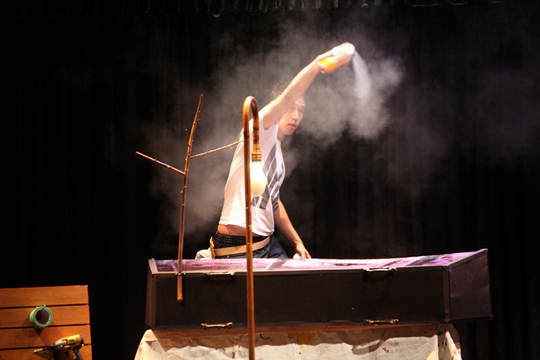 “The magician’s role in the film is not that of a magician; actually he is a stand in for myself, as the artist who is creating a certain scenery that I wish to construct for the camera,” says Yeondoo Jung of the protagonist in his work. And indeed, he assumed the role more akin to a director. Cinemagician begins with the whole nine yards of “Lights, Camera, Rolling, Action…” and Jung is only present in so far as becoming a part of the audience. He leads the experience and yet separates himself from it, perhaps, to emphasize the need for self-criticism that is all the more poignant in the contemporary art world.

In formulating the concept for the piece, Jung drew inspiration from the early experiments of French filmmaker George Melies, who in the nineteenth century recorded on screen his magic and cabaret illusionist acts and may be considered the forefather of cinematic special effects such as “stop trick” (break in filming, substitution of one object on screen with another, and resuming the process), as well as dissolves, multiple exposures and exquisite hand painted film frames. While other early filmmakers were exploring the documentary medium of film, Melies was a maverick and quickly realized the potential of aesthetic value of film. In effect, Cinemagician extends Melies’s ideal via presenting a real-time happening that is juxtaposed with a projection of actions being filmed on stage. The viewer is thus confronted and compelled to active spectatorship. Throughout the performance, the gaze shifts between the stage that allows us to observe the strict action as it unfolds and illusionary reality as it is transformed through cinema. The spectacle occurs in our ability to gravitate between truth and its perception.

This entry was posted on Saturday, November 21st, 2009 at 12:51 pm and is filed under AO On Site. You can follow any responses to this entry through the RSS 2.0 feed. You can leave a response, or trackback from your own site.