May 13th, 2021
REFERENCE LIBRARY
Home » Go See – London: Ed Ruscha’s ‘On the Road: An artist book of the classic novel by Jack Kerouac’ at Gagosian Gallery through November 28, 2009

Go See – London: Ed Ruscha’s ‘On the Road: An artist book of the classic novel by Jack Kerouac’ at Gagosian Gallery through November 28, 2009 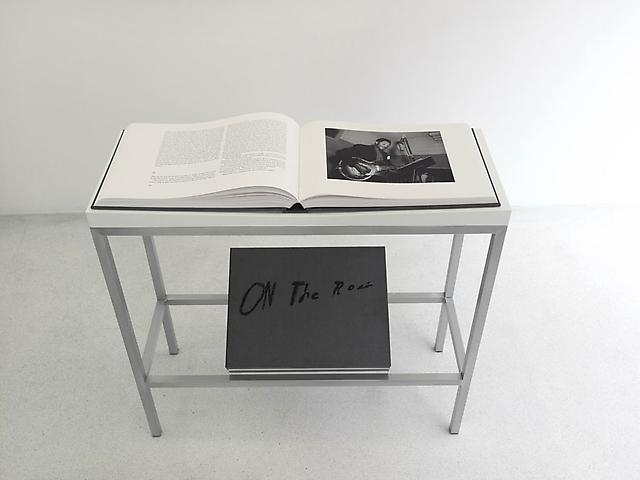 Installation view of Ed Ruscha’s artist book: On the Road by Jack Kerouak

For the Los Angeles based artist Ed Ruscha, the road carries a symbolic connection to his artistic beginnings as well as the culture in which he thrives. His intimate reflection on the aesthetic and emotion of traveling or just the nature of moving from one point to another is the subject of a book tribute to Jack Kerouac’s On the Road and an exhibition at Gagosian gallery in London. Ruscha’s work is also presented in a large retrospective of the artist’s ouevre at the Hayward Gallery in Mayfair.  Both shows reflect a trajectory and development of one of the most groundbreaking American artist of the 20th century. Tha Gagosian Gallery show runs through November 28th and the Hayward retrospective ends on January 10th, 2010.

An artist’s book of the classic novel by Jack Kerouac “On the Road,” 2009. Ed Ruscha via Gagosian Gallery

The view of the artist book by Ed Ruscha of Kerouac’s novel On the Road. Released in the edition of 350, the book comprises 228 pages, is signed and numbered by the artists and is presented in a slip case. Via Gagosian Gallery.

Ed Ruscha is best known for his contemplative modest approach to desolate landscapes, roadside gas stations, and most distinctly his poignant one-word canvases in the Pop Art tradition.  The word has been perhaps his greatest subject throughout the years. His early works in the 1960’s – such as “OOF” and “Radio” – introduced the theme of often dismissed as banal slogans, words and signs. But living in California and spending a lot of time in a car makes one desensitized to the flashy landscape of storefronts, banners, advertisements and logos.

Installation view of On the Road via Gagosian Gallery

Ed Ruscha began to sharpen his vision of an intrinsically American aesthetic during his hitchhiking round trip from Los Angeles to Miami. At the age of 14, his impressions provided a phenomenal effect: “Being on the highway is an important thing. In America everything is left to right. I am drawn to the horizontal sweep. I think it has to do with driving – looking out onto the flat landscapes,” he reflects. His emblematic panoramas are unsettling, and only phrases like “Talk Radio,” “Not a BAd World Is It?” break the archetypal melancholy and vastness.

Jack Kerouac wrote his epic novel On the Road in 1951. On his beat up typewriter he banged and spilled out feverishly his observations and feelings, recording his extensive road trip travels through the United States and Mexico in twenty days and on a 120 foot-long scroll. Kerouac’s radical manner of free-style writing embraced the unedited raw emotion of an unbound adventure and quickly granted him a leading voice of the Beat Generation, a new group of writers and poets mainly based in San Francisco whose circle included Allen Ginsberg and William S. Burroughs.

Ed Ruscha has always had a romantic relationship with the Beats, which he expressed in a series on cheaply printed deadpan photographic books produced in the 1960’s. His meditations on the limitless expanse of the American landscape and the mythology of the endless highway symbolized the bohemian rhapsody of the Beats. Over the last five years, Ruscha had revisited his early muse and created a version of Kerouac’s On the Road all his own. The artist book appears leather-bound in a limited edition and contains the full text of the novel along with Ruscha’s black and white photo illustrations, some taken by Ruscha, some commissioned from other photographers, and others are found images that all draw upon the minute details and impressions of Kerouac’s seminal work.

Ruscha describes On the Road in his own words: “it’s about a group of crazy young people who just travel back and forth across the United States. Sometimes they hitchhike and sometimes they drive cars. They steal cars and just want to be on the road the whole time. I’ve always liked that notion.” And so do Ed Ruscha’s paintings create an unbound space between image and text, landscape and symbols, and an enormous sense of possibilities in what lays beyond.

This entry was posted on Wednesday, November 11th, 2009 at 1:25 pm and is filed under Go See. You can follow any responses to this entry through the RSS 2.0 feed. You can leave a response, or trackback from your own site.