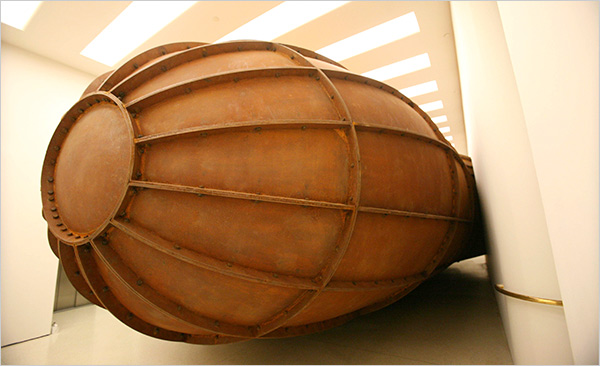 Anish Kapoor‘s Memory (2008), a site-specific work now on view at the Guggenheim in New York, is the fourteenth commission project launched by the Solomon R. Guggenheim Foundation and the Deutsche Bank. Conceived to engage two different exhibition locations at the Guggenheim museums in Berlin and New York, the work is made of a skin of Cor-Ten steel only eight millimeters thick. 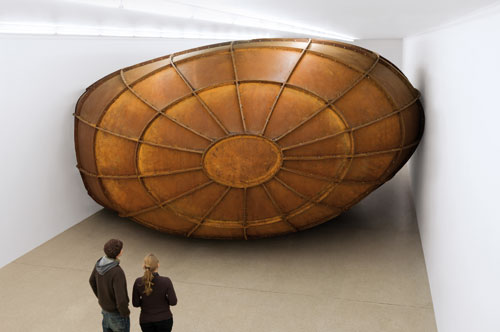 A piece which appears to defy gravity, it is tucked tightly between the gallery walls and ceiling never completely visible to the viewer. Its 24-ton volume body of 56 parts gives the work a presence that is at once industrial and foreboding. The title refers to the fact that one cannot see the installation all at once. The viewer must resort back their imagination and piece together incomplete views from different perspectives in order to be able to grasp some sense of the whole. The idea of memory, or rather amnesia, is thus evoked through the work. 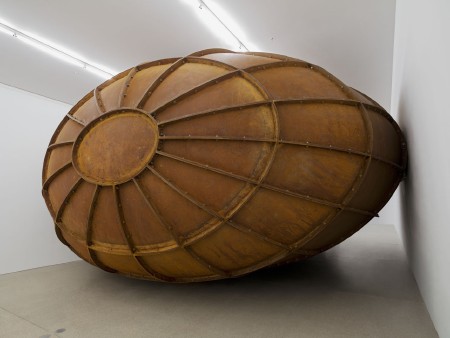 Anish Kapoor, 55, currently lives in London and is known for his large-scale installations which seem to create tension between the qualities of material, surface, and texture and the large expanses of inner space that often define his work.

This entry was posted on Tuesday, November 17th, 2009 at 12:46 pm and is filed under Go See. You can follow any responses to this entry through the RSS 2.0 feed. You can leave a response, or trackback from your own site.