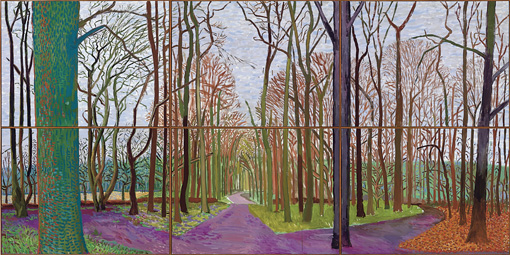 In Yorkshire the artist devised a method for painting large-scale canvases outdoors in a way which permitted him to overcome the wind, rain, and snow as well as allowed him to view the scene and logistically transport his canvases. Each day he divided a painting into several canvases working separately on each one. At the end of the day he would combine the parts to form the whole image. Such a technique resulted in large-scale multi-paneled works such as Bigger Trees Near Warter done during the winter and summer of 2008 and composed of nine canvases each. 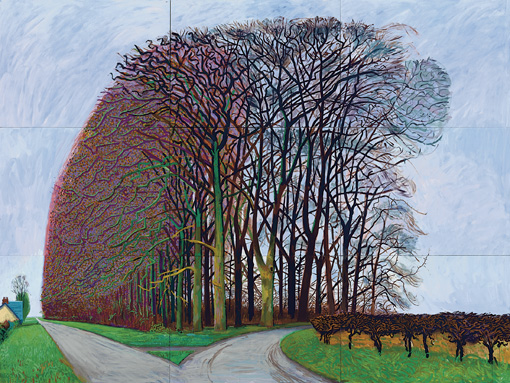 In these new works Hockney’s glowing palette depicts the forests of his childhood. “So much of seeing is memory, which is yet another aspect of the human reality of vision that ordinary photographs can’t even begin to capture,” says the artist. In Woldgate Woods three separate lavender paths take the viewer into the heart of the forest while in Winter Timber long slim yellow logs are juxtaposed against a purple path and blue forest. 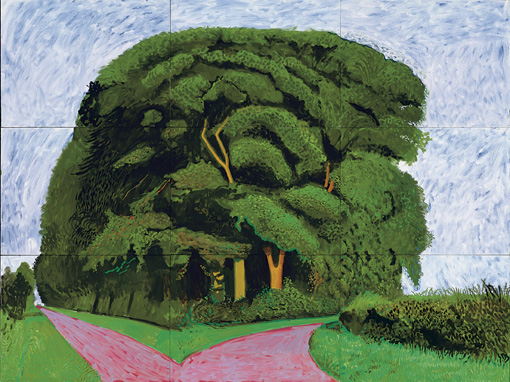 David Hockney was born in Bradford, England in 1937. He received the gold medal for his year at London’s Royal College of At in 1962. In 1963, he had his first one-man show. In 1970 his first retrospective was organized at the Whitechapel  in London. His work has since appeared in numerous retrospectives and exhibits in major galleries and museums in the United Kingdom and internationally. Since 1966 Hockney also has been involved in creating stage designs for productions at the Royal Court Theatre in London, the Metropolitan Opera in New York, the San Francisco Opera, and the Lyric Opera of Chicago among others. 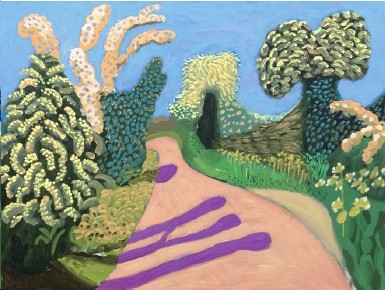 Hawthorne Blossom, Woldgate No.4 (2009) by David Hockney, via Artnet

This entry was posted on Sunday, November 8th, 2009 at 7:57 pm and is filed under Go See. You can follow any responses to this entry through the RSS 2.0 feed. You can leave a response, or trackback from your own site.